10 Must Watch Films on LGBTQIA+ History

LGBTQ History Month each October offers an important opportunity to expand our knowledge of LGBTQIA+ histories and ensure that they are being addressed in the classroom. One great way to tackle the task of expanding our own knowledge as educators is to turn to the medium of film. Below is a list of 10 documentary films and television series that we are diving into here at Facing History and that we invite you to explore alongside us.

In addition to sweeping overviews of LGBTQIA+ movements and representations in media, this list of films covers a number of subjects: the first public lesbian organization in the U.S.; the little-known-yet-historic 1966 San Francisco uprising that preceded Stonewall; the life and times of Black gay civil rights leader Bayard Rustin; the forces that drive underrepresentation of LGBTQIA+ people in historical archives and the rich stories that can be unearthed when these forces are challenged; a landmark court case that forever altered perceptions of LGBTQIA+ families in the U.S.; the LGBTQIA+ community’s powerful story of resistance during and after the AIDS epidemic; and the pathbreaking activism of Marsha P. Johnson and Sylvia Rivera.

Below, each studio describes what to expect when you watch each of these films or docuseries:

No Secret Anymore: The Times of Del Martin & Phyllis Lyon (2003)

“Del Martin and Phyllis Lyon were partners in love and political struggle for over fifty years. With incisive interviews, rare archival images and warmhearted humor, No Secret Anymore reveals their inspiring public work, as well as their charming private relationship. It is a delightful way to meet these legendary lesbians, known as the founders of the modern lesbian civil rights movement. When they courageously launched the Daughters of Bilitis in 1955, it became the first public organization for lesbians in America. This documentary follows Martin and Lyon’s story through half a century, tracing the emergence of lesbians from the fear of discovery to an expectation of equality.”

“Emmy Award-winning Screaming Queens tells the little-known story of the first known act of collective, violent resistance to the social oppression of queer people in the United States - a 1966 riot in San Francisco's impoverished Tenderloin neighborhood, three years before the famous gay riot at New York's Stonewall Inn. Screaming Queens introduces viewers to street queens, cops and activist civil rights ministers who recall the riot and paint a vivid portrait of the wild transgender scene in 1960s San Francisco. Integrating the riot's story into the broader fabric of American life, the documentary connects the event to urban renewal, anti-war activism, civil rights and sexual liberation. With enticing archival footage and period music, this unknown story is dramatically brought back to life.” 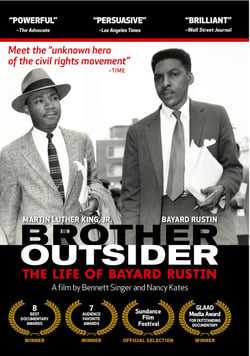 “During his 60-year career as an activist, organizer, and ‘troublemaker,’ Bayard Rustin formulated many of the strategies that propelled the American civil rights movement. His passionate belief in Gandhi's philosophy of nonviolence drew Martin Luther King Jr. and other leaders to him in the 1940s and 50s; his practice of those beliefs drew the attention of the FBI and police. In 1963, Rustin brought his unique skills to the crowning glory of his civil rights career: his work organizing the March on Washington, the biggest protest America had ever seen. But his open homosexuality forced him to remain in the background, marking him again and again as a 'brother outsider.' Brother Outsider: The Life of Bayard Rustin combines rare archival footage — some of it never before broadcast in the U.S. — with provocative interviews to illuminate the life and work of a forgotten prophet of social change.”

P.S., Burn This Letter Please (2020)
“A box of letters, held in secret for nearly 60 years, ignites a 5-year exploration into a part of LGBT history that has never been told. The letters open a window into a forgotten world where being yourself meant breaking the law and where the penalties for ‘masquerading’ as a woman were swift and severe. The government sought to destroy them, then history tried to erase them, now they tell their story for the first time.” 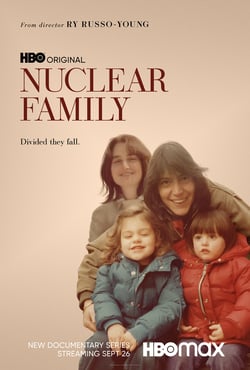 “Nuclear Family is a three-part documentary series following filmmaker Ry Russo-Young as she turns the camera on her own past to explore the meaning of family. In the late 70s/early 80s, when the concept of a LGBTQ+ family was inconceivable to most, Ry and her sister Cade were born to two lesbian mothers through sperm donors. Ry’s idyllic childhood was threatened by an unexpected lawsuit which sent shockwaves through her family’s lives and continues to reverberate today. The docuseries explores the extraordinary story of a first-generation lesbian family, from its origins in outlaw counterculture, to the mainstream court system’s attack on and ultimate defense of Ry’s and her moms’ rights and existence, ending in a landmark legal decision that would change the way LGBTQ+ families were perceived forever.”

“In the dark days of 1987, America was six years into the AIDS epidemic, a crisis that was still largely being ignored both by government officials and health organizations — until the sudden emergence of the activist group ACT UP in Greenwich Village, New York, largely made up of HIV-positive participants who refused to die without a fight. Along with TAG (Treatment Action Group), and emboldened by the power of rebellion, they took on the challenges that public officials had ignored, raising awareness of the disease through a series of dramatic protests. More remarkably, they became recognized experts in virology, biology, and pharmaceutical chemistry. Their efforts would see them seize the reins of federal policy… force the AIDS conversation into the 1992 presidential election, and guide the way to the discovery of effective AIDS drugs that turned an HIV diagnosis from a death sentence into a chance to live long and healthy lives.” 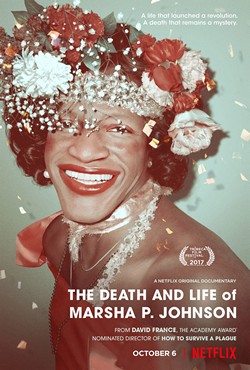 “Marsha arrived in the Village in the 1960s where she teamed up with Sylvia Rivera when both claimed their identities as ‘drag queens,’ to use the vernacular of the times. Together, the radical duo fought arrests, condemned police brutality, organized street kids, battled the intolerant majority within the gay community, and helped spearhead the Stonewall Riots. In 1970 they formed the world’s first trans-rights organization, STAR (Street Transvestites Action Revolutionaries). Despite their many challenges over the years—bias, homelessness, illness —Marsha and Sylvia ignited a powerful and lasting civil rights movement for gender nonconforming people. Now, a quarter century later, at a time of unprecedented visibility and escalating violence in the transgender community, a dynamic activist named Victoria Cruz has taken it upon herself to reexamine what happened at the end of Marsha’s life. As the film dips in and out of jawdropping archival footage from the 1970s, ’80s and ’90s, The Death and Life of Marsha P. Johnson follows as this champion pursues leads, mobilizes officials, and works to get to the bottom of Marsha's death.” 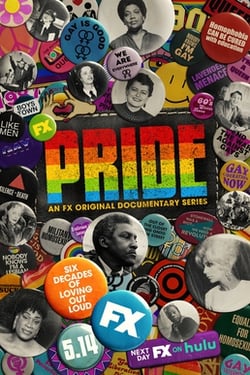 “PRIDE [is] a six-part documentary series chronicling the struggle for LGBTQ+ civil rights in America from the 1950s through the 2000s. Seven renowned LGBTQ+ directors explore heroic and heartbreaking stories that define us as a nation. The limited series spans the FBI surveillance of homosexuals during the 1950s Lavender Scare to the ‘Culture Wars’ of the 1990s and beyond, exploring the queer legacy of the Civil Rights movement and the battle over marriage equality.

Visible: Out on Television (2020)
“Visible: Out on Television investigates the importance of TV as an intimate medium that has shaped the American conscience, and how the LGBTQ movement has shaped television. Combining archival footage with interviews with key players from the movement and the screen, the docuseries is narrated by Janet Mock, Margaret Cho, Asia Kate Dillon, Neil Patrick Harris and Lena Waithe. Each hour-long episode will explore themes such as invisibility, homophobia, the evolution of the LGBTQ character, and coming out in the television industry.” 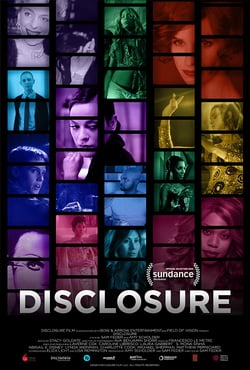 “An unprecedented, eye-opening look at transgender depictions in film and television, revealing how Hollywood simultaneously reflects and manufactures our deepest anxieties about gender. Leading trans thinkers and creatives, including Laverne Cox, Lilly Wachowski, Yance Ford, Mj Rodriguez, Jamie Clayton, and Chaz Bono, share their reactions and resistance to some of Hollywood’s most beloved moments… What emerges is a fascinating story of dynamic interplay between trans representation on screen, society’s beliefs, and the reality of trans lives. Reframing familiar scenes and iconic characters in a new light, director Sam Feder invites viewers to confront unexamined assumptions, and shows how what once captured the American imagination now elicits new feelings. Disclosure provokes a startling revolution in how we see and understand trans people.”

Facing History and Ourselves invites educators to access our on-demand webinar on how to use the film Brother Outsider to explore Bayard Rustin’s identity as a Black gay leader within the Civil Rights Movement and his legacy today.