Here at Facing History, we see heritage and awareness months as opportunities to deepen our knowledge of and attention to the histories and contemporary experiences of historically marginalized communities. However, the focus on celebrating these communities over one particular month can further marginalize the very experiences we are hoping to elevate. With this in mind, what follows is an invitation to engage with important themes raised by Black History Month this February and throughout all of the months of the year.

Some members of the Facing History staff are exploring these five new books published within the last year, and we invite you to explore them alongside us. As with last year’s reading listicle on related themes, we look forward to hearing your impressions. These titles cover themes in Black history that are closely connected to the themes of our educator resources including the significant roles of Black people in the construction of the U.S. and the implications of decisions to memorialize (or not memorialize) those events; the history and implications of the events of the Reconstruction Era; the history (and continuing traces) of Jim Crow; the complex role of media and journalists in both advancing and curtailing justice in the Jim Crow era; and enduring questions of race and democracy inspired by the legacy of Dr. Martin Luther King, Jr.

Below is excerpted promotional text from each book’s publisher and a link to a related Facing History resource to empower educators to bring parallel themes into the classroom:

“Black Hands, White House documents and appraises the role enslaved women and men played in building the US, both its physical and its fiscal infrastructure. The book highlights the material commodities produced by enslaved communities during the Transatlantic Slave Trade. These commodities--namely tobacco, rice, sugar, and cotton, among others--enriched European and US economies; contributed to the material and monetary wealth of the nation's founding fathers, other early European immigrants, and their descendants; and bolstered the wealth of present-day companies founded during the American slave era. Critical to this study are also examples of enslaved laborers' role in building…the nation's capital city…its seats of governance--the White House and US Capitol--and other federal sites and memorials.

Given the enslaved community's contribution to the US, this work questions the absence of memorials on the National Mall that honor enslaved, Black-bodied people… Black Hands, White House appeals to those interested in exploring how nation-building and selective memory, American patriotism and hypocrisy, racial superiority and mythmaking are embedded in US origins and monuments, as well as in other memorials throughout the transatlantic European world. Such a study…adds significantly to the burgeoning and in-depth conversation on racial disparity, race relations, history-making, reparations, and monument erection and removal.” — Fortress Press 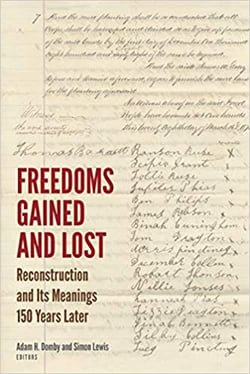 “Reconstruction is one of the most complex, overlooked, and misunderstood periods of American history. The thirteen essays in this volume address the multiple struggles to make good on President Abraham Lincoln’s promise of a ‘new birth of freedom’ in the years following the Civil War, as well as the counter-efforts including historiographical ones―to undermine those struggles. The forms these struggles took varied enormously, extended geographically beyond the former Confederacy, influenced political and racial thought internationally, and remain open to contestation even today…

How we remember Reconstruction and what we do with that memory continues to influence politics, especially the politics of race, in the contemporary United States. Offering analysis of educational and professional expansion, legal history, armed resistance, the fate of Black soldiers, international diplomacy post-1865 and much more, the essays collected here draw attention to some of the vital achievements of the Reconstruction period while reminding us that freedoms can be won, but they can also be lost.” — Fordham University Press

“White publishers and editors used their newspapers to build, nurture, and protect white supremacy across the South in the decades after the Civil War. At the same time, a vibrant Black press fought to disrupt these efforts and force the United States to live up to its democratic ideals. Journalism and Jim Crow centers the press as a crucial political actor shaping the rise of the Jim Crow South. The contributors explore the leading role of the white press in constructing an anti-democratic society by promoting and supporting not only lynching and convict labor but also coordinated campaigns of violence and fraud that disenfranchised Black voters. They also examine the Black press’s parallel fight for a multiracial democracy of equality, justice, and opportunity for all—a losing battle with tragic consequences for the American experiment.”
— University of Illinois Press

The South: Jim Crow and Its Afterlives
by Adolph L. Reed Jr. 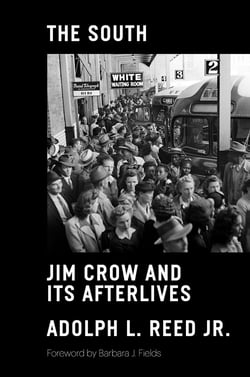 “The last generation of Americans with a living memory of Jim Crow will soon disappear. They leave behind a collective memory of segregation shaped increasingly by its horrors and heroic defeat but not a nuanced understanding of everyday life in Jim Crow America. In The South, Adolph L. Reed Jr. — New Orleanian, political scientist, and according to Cornel West, “the greatest democratic theorist of his generation” — takes up the urgent task of recounting the granular realities of life in the last decades of the Jim Crow South.

The South unravels the personal and political dimensions of the Jim Crow order, revealing the sources and objectives of this unstable regime, its contradictions and precarity, and the social order that would replace it… Filled with analysis and fascinating firsthand accounts of the operation of the system that codified and enshrined racial inequality, this book is required reading for anyone seeking a deeper understanding of America's second peculiar institution [and] the future created in its wake.” — Verso

Letters to Martin: Meditations on Democracy in Black America
by Randal Maurice Jelks 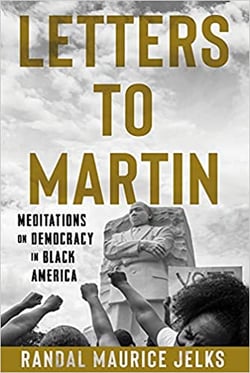 “Evoking Martin Luther King Jr.’s ‘Letter from Birmingham Jail,’ these meditations, written in the form of letters to King, speak specifically to the many public issues we presently confront in the United States—economic inequality, freedom of assembly, police brutality, ongoing social class conflicts, and geopolitics. Award-winning author Randal Maurice Jelks invites readers to reflect on US history by centering on questions of democracy that we must grapple with as a society.

Hearkening to the era when James Baldwin, Dorothy Day, Reinhold Niebuhr, and Richard Wright used their writing to address the internal and external conflicts that the United States faced, this book is a contemporary revival of the literary tradition of meditative social analysis.”

Facing History and Ourselves invites educators to access our Black History Collection.

Pictured above: The covers of The South: Jim Crow and its Afterlives (Verso, 2022) and Black Hands, White House (Fortress Press, 2021).