Home > Our Blogs > Facing Today > Aliens in Their Own Land: The Incarceration of Japanese Americans

Aliens in Their Own Land: The Incarceration of Japanese Americans 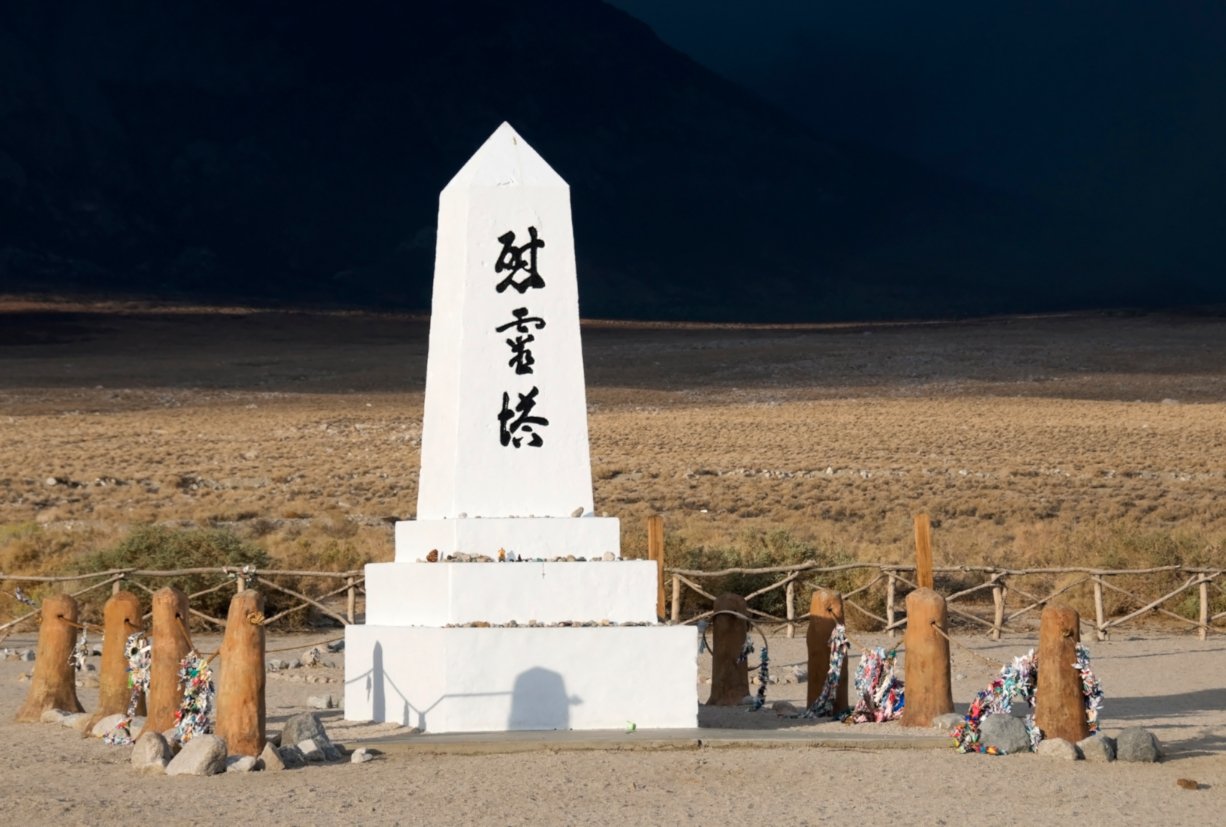 Travel 230 miles north of Los Angeles to Owens Valley at the foot of the Sierra Nevada Mountain range and you will find a white concrete obelisk with black Japanese writing rising out of the desert. Only a few simple gravestones stand in the background a few feet away. Today, the obelisk is one of the few remaining structures from the Manzanar War Relocation Center—an American concentration camp where Japanese Americans were held during World War II. Erected in August 1943, the monument’s Japanese Kanji characters read “Soul Consoling Tower” to memorialize both the 150 prisoners who died at the camp and all Japanese Americans who were targeted by their own government.

The obelisk and graves remind us that racial prejudice and wartime hysteria drove the United States government—elected by the people—to imprison anyone with 1/16th or more Japanese blood. Innocent newborn babies, young children, the elderly, the infirm, orphaned children, and even children adopted by Caucasian parents were forcibly relocated to concentration camps because of their racial identity. And more than a half century later, the Japanese American community continues to reckon with the present-day reverberations of the history the obelisk invites us to remember.

The story behind this monument began on December 7, 1941 when the United States was deliberately attacked by the naval and air forces of the Empire of Japan. U.S. military leaders were concerned that the West Coast was particularly vulnerable to additional Japanese attacks due to the unsubstantiated fear that the large population of Japanese Americans would conduct acts of sabotage on coastal defenses and the agricultural industry.

For nearly 50 years prior to Pearl Harbor, many Americans had seen newcomers from Japan and Asia as a threat to the “American standard of living” and to the “racial integrity of the nation.” Newspapers repeatedly warned of the “yellow peril” and those fears were embodied in Federal laws like the Chinese Exclusion Act of 1882 which was later expanded to include people from other parts of Asia. State and local laws, like California’s Alien Land Law of 1913, prohibited “Asiatic aliens” from owning land, or holding jobs in many industries.

Anti-Asian sentiment paved the way for President Franklin Delano Roosevelt to issue Executive Order 9066 which directed the United States government to forcibly relocate more than 110,000 men, women, and children of Japanese ancestry living on the West Coast of the United States to remote concentration camps scattered across the interior of the United States. Two-thirds of the targeted population were American citizens but that did not prevent the United States government from conducting unjustified searches of their homes and businesses. To aid this process, they ordered non-US citizens from Japan to register with a government database and used census data to identify, forcibly relocate and incarcerate Japanese American citizens for the entirety of the second World War.

Among those targeted was Jeanne Wakatsuki Houston who was seven years old when her family was uprooted from their home near Santa Monica, California and sent to live at the Manzanar War Relocation Center. Manzanar was one of ten concentration camps hastily constructed of "tar paper-covered barracks of simple frame construction without plumbing or cooking facilities of any kind" as noted in a 1943 War Relocation Authority report. Her father, a fisherman, was arrested along with numerous other Japanese American men in the community by FBI agents on an unsupported charge of delivering oil to Japanese submarines. With only her mother to care for her brothers, sisters and elderly grandparents, the Wakatsukis endured the indignities of forced detention and being labeled “enemy aliens” of the only country they had ever called home. The imprisonment and humiliation that they experienced took a tremendous emotional toll as Wakatsuki Houston recalls in her memoir, Farewell to Manzanar:

In 1980, the Japanese American community formed a grassroots campaign calling upon the United States Congress to form the Commission on Wartime Relocation and Internment of Civilians to investigate and make amends for incarcerating Japanese Americans. The commission found that the U.S. government’s policy of exclusion, removal and detention was systematically conducted despite the fact that no documented evidence of espionage or sabotage was shown and there was no direct military necessity for detention. War hysteria fueled by racism trampled the civil liberties of generations of Japanese Americans who never fully regained what they had lost.

The words we use to describe the treatment of Japanese Americans during WWII have changed, but the issues raised—about immigration policy, national security, and who is an American—are just as important now as they were in 1942. And Japanese American activists are fighting to ensure that we confront the parallel threats to democracy that continue into the present.

After the terrorist attacks on Sept. 11, 2001 against the United States, nearly 80,000 people from predominantly Muslim countries were forced to register their identities with the U.S. government and 13,000 people were deported in the name of national security. Similar rhetoric was invoked in 2017 when the U.S. government instituted a travel ban to stop people living in Muslim-majority countries from traveling to America. And national security was, again, the justification for the creation of detention centers along the Mexico-U.S. border where refugees are imprisoned and subjected to punitive immigration restrictions.

In 2001 and today, the Japanese American community has been among the first to offer support to targeted populations, having seen the ease with which our elected officials may invoke “national security” to rationalize the violation of people’s civil liberties. As one Japanese American activist recently said:

“Manzanar should not just be a symbol of what is wrong with our nation. Manzanar should become a monument to our core values of democracy and civil rights…Speak out, demand equal justice under the law for everyone no matter who they are or where they come from.”

May is Asian Pacific American Heritage Month and we must never forget or minimize the historical experiences of Asian and Pacific Islanders if we are to safeguard our democracy from repeating the injustices of the past. Yuri Kochiyama, an Asian American human rights activist, was incarcerated in the War Relocation Center at Jerome, Arkansas in her twenties. In the documentary film Yuri Kochiyama: Passion for Justice, she reminds us that "our ultimate objective in learning about anything is to try to create and develop a more just society."

Facing History and Ourselves invites educators to access “Bearing Witness to Japanese American Incarceration” which introduces films, primary source materials, literature and teaching guides on the experiences of Japanese Americans.