Remembering Daisy Bates: Orator at the March on Washington 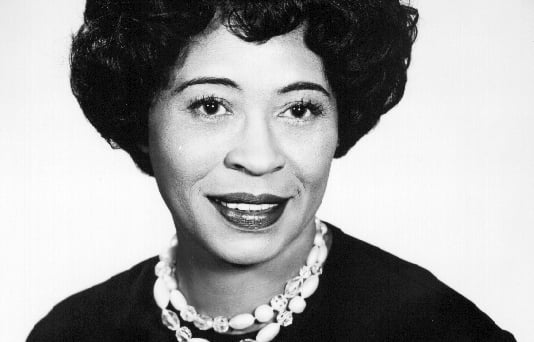 Today marks the 56th anniversary of the March on Washington—the historic 1963 protest in which as many as 500,000 people marched to demand jobs and freedom for Americans of all racial backgrounds. Though many of us remember this as the day that Dr. Martin Luther King, Jr. delivered his iconic “I Have a Dream” speech, it is easy to forget that he was not the only civil rights leader to address the crowd. One of the leaders who joined him was movement veteran Daisy Bates—the only woman permitted to speak, though not in her own words.

After being introduced by march organizer Bayard Rustin, Bates delivered the 142-word “Tribute to Women.” Though her statement was brief and prepared for her by a male staffer, existing writings on Bates’ life suggest that she was seldom at a loss for words. As biographer Grif Stockley observed in Daisy Bates: Civil Rights Crusader, Bates ”confounds the expectations of those of both races who prefer their heroines modest… [She was] criticized as being ‘pushy,’ ‘ambitious,’ ‘aggressive,’ those qualities for which men in leadership roles are praised.” But as we view Bates’ life in retrospect, we can see that it was precisely these qualities that allowed her to have a significant impact on her community and the country at large.

In collaboration with husband J.C. Bates, Daisy Bates launched the Arkansas State Press—a voice for the African American community in Arkansas and a platform to cover the underreported racial terror sweeping her region. Her journalistic leadership positioned her to become President of the Arkansas chapter of the NAACP in 1952, and play a central role in the metaphorical earthquake that would soon shake Little Rock and the rest of the country.

After being highly visible within Arkansas’ black community for years, Bates entered the awareness of white Arkansans in 1956 when an act of defiance landed her on the front page of the largest statewide newspaper. During pre-trial proceedings for Aaron v. Cooper—the Supreme Court case that would set the stage for the integration of Little Rock Central High School—the school board’s lawyers sought to invalidate local NAACP leaders’ bid for justice. Among their lawyers was the highly respected Leon Catlett who repeatedly referred to Bates using her first name. This was a widely used strategy employed by whites to reinforce the notion that black people were childlike and unworthy of respect, but Bates had the audacity to correct him publicly. She said:

“You addressed me several times this morning by my first name. That is something that is reserved for my intimate friends and my husband. You will refrain from calling me Daisy.”

When Catlett retorted that he “[wouldn’t] call [her] anything then,” her response was “that’ll be fine.” A black woman publicly challenging such acts of subjugation in the Jim Crow South was so remarkable that it was newsworthy, and it sent ripples across Arkansas. As biographer Stockley explains, following Bates’ brave choice, “blacks in Little Rock and throughout Arkansas...knew they had a leader who dared to confront whites face-to-face and as an equal.” And by the same token, “Little Rock whites...knew their enemy was not just in the New York office of the NAACP or in the pages of the Arkansas State Press.”

As tensions mounted, Bates became the sole mentor and spokeswoman for the Little Rock Nine—the nine black students selected to integrate Central High School amid physical threats from the National Guard and mobs of white segregationists. And while offering her home as a daily meeting place for the Nine, Bates endured a deluge of threats and nightly attacks that included cross burnings, gunfire, and other violent acts. As Bates’ role in desegregation became more visible, major advertisers pulled out of her newspaper and the operation folded. Despite this loss, she remained a fierce champion of civil rights and educational equity, and would resuscitate the newspaper after her husband died years later.

Given Bates’ marked contributions to civil rights and demonstrated knack for articulate dissent, America lost an important opportunity when she was not permitted to speak in her own words at the March on Washington. What would she have said, and what would it be like if we could look back to that day and remember her words, in addition to King’s moving oratory? Bates’ story calls to mind the scores of movement leaders whose contributions were immeasurable but who were never permitted to become the face of the movement—be it for their gender, their sexual orientation, or for other reasons that threatened the credibility of the movement in the eyes of other leaders. As social change work continues around race, gender, and other dimensions of identity, Bates’ unapologetic spirit of resistance remains an inspiration and her legacy speaks for itself.

Facing History and Ourselves invites educators to stream episode 4 of Eyes on the Prize: America’s Civil Rights Movement for free via our virtual library to take a deeper dive into the March on Washington with students.