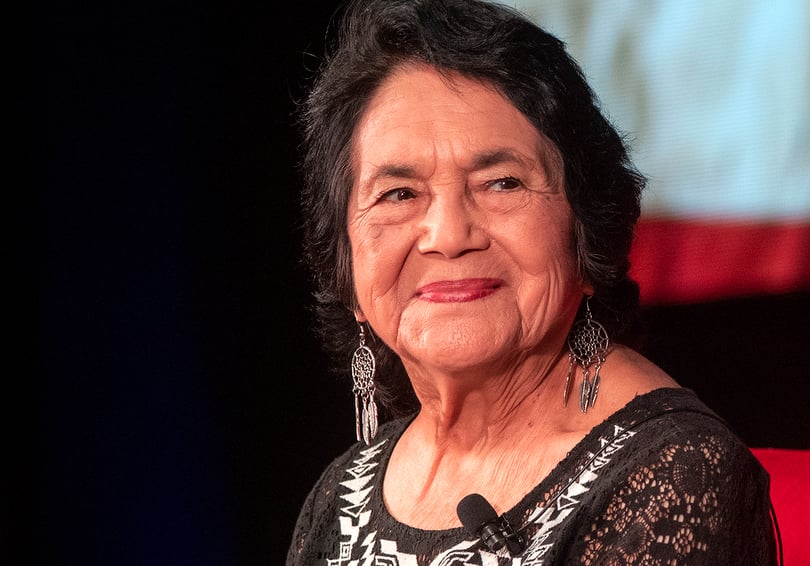 This National Hispanic Heritage Month, we find an opportunity to explore histories, contributions, and experiences of Hispanic and Latinx people in our communities and classrooms that are often left out of the news and history books. One such story is that of Dolores Huerta—a Chicana activist whose contributions rival those of the most renowned civil rights leaders in U.S. history, but whose legacy is significantly less known. Awarded the Presidential Medal of Freedom in 2012 and nine honorary doctorates, Huerta is a living legend in the labor movement and has been a tireless advocate for social justice for over 50 years.

Huerta is best known for organizing farm workers in the U.S.—a predominantly Latino labor force by the time her career began in the 1950s. Though Chinese, Japanese, Filipino, and Mexican workers had performed most of this agricultural labor in the western states in the 1800s, the majority of migrant farm workers were Mexican by the mid-20th century due to the Bracero Program—a bilateral initiative that brought 4.5 million Mexicans to the U.S. to address labor shortages in the agricultural and railroad industries created by World War II. Described as a form of “legalized slavery” by the Department of Labor official in charge of the Bracero Program itself, workers were met with exploitative labor practices, horrible living conditions, and outright racist and sexist violence. But they would soon find an ally in Dolores Huerta.

After witnessing the poverty experienced by farm workers and their families while teaching in an elementary school early in her career, Huerta became a leader of the Stockton Community Service Organization (CSO). In 1955, she discovered a collaborator in CSO Executive Director César Chávez. In contrast to the aims of CSO, Huerta and Chávez were mutually committed to organizing farm workers and, in 1962, resigned to co-found the National Farm Workers Association (NFWA). Chávez often occupied the spotlight and received much of the credit for their joint work, however. Though Huerta’s unparalleled skills as an organizer and negotiator were essential to their success, she faced rampant sexism in the movement and derision from people who believed that she belonged at home with her children rather than on the front lines.

While directing a national boycott of California table grapes in New York, Huerta discovered a supporter in the young feminist activist and journalist Gloria Steinem. Huerta reports that having found allies in the feminist movement began to shift some of her thinking about their cause and emboldened her to make sexism within the labor movement an explicit focus of her work.

After the NFWA became the United Farm Workers (UFW) union in 1966, Huerta engineered a number of wins including the passage of the Agricultural Labor Relations Act of 1975—a historic victory that gave farm workers in California the right to organize for better compensation and working conditions. And with Huerta’s leadership, the UFW continued to win rights for workers for decades. But when Chávez died in 1993, Huerta’s career took an unexpected turn. Despite her seniority and popularity amongst the workers, Huerta was not selected to succeed Chávez as president of the UFW and the union would begin pushing her out in the years that followed.

Though Huerta would resign from UFW in 2002, her passion for social justice was not extinguished. That year, she founded the Dolores Huerta Foundation where she delivers education in grassroots organizing and champions a number of causes including environmental justice and the eradication of the school-to-prison pipeline. And despite her position of leadership, Huerta continues to organize on the ground and recently faced arrest at a widely publicized protest with the Service Employees International Union at the age of 89.

Facing History honored Huerta’s life of indefatigable resistance with the Upstander Award at our benefit dinner in March 2019. There, Huerta addressed our community about the central role that education plays in the ongoing fight for social justice—from reducing rates of incarceration to the historical education that empowers youth to take a stand. She reminded the audience that young people have led all key social movements in the U.S. and that they must be equipped with knowledge of their own communities’ histories to take up this mantle in the present. “We are not going to stop these discriminatory practices in our society unless we start with education,” she said.

This month, we find a special opportunity to ensure that occluded histories, contributions, and experiences of Hispanic and Latinx people are present in our curricula all year round. Facing History encourages educators to join us in flipping the script in classrooms and communities around the country.

Facing History and Ourselves invites educators to stream the documentary Latino Americans: The 500-Year Legacy That Shaped a Nation for free via our virtual library.