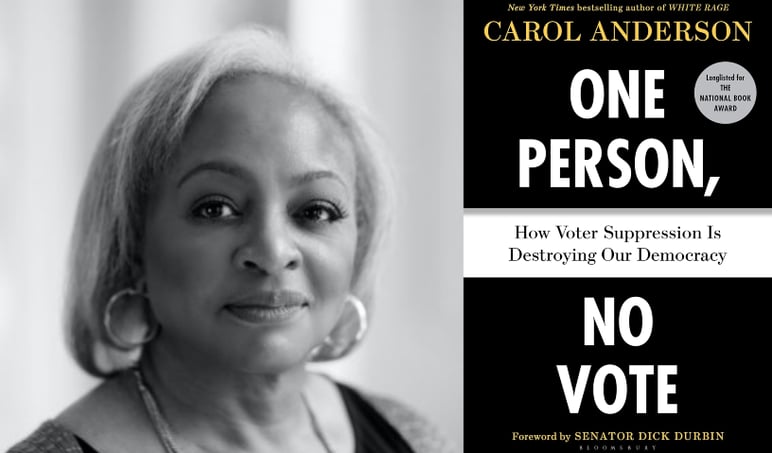 We recently sat down with Dr. Carol Anderson—professor, historian, and National Book Critics Circle Award winner—to discuss the history of the struggle for African Americans' voting rights, as well as its continuing relevance to racial justice and democracy. Dr. Anderson is the author of numerous books including One Person, No Vote: How Voter Suppression is Destroying Our Democracy. Below are excerpts from our conversation with Dr. Anderson, facilitated by Facing History’s Director of International Strategy, Dr. Karen Murphy.

KM: I'm wondering if you can talk about the 14th and 15th Amendments to the Constitution. What happened, why are they so important, and why does every American need to know about them?

CA: Coming out of the Civil War, there were already these kinds of debates that were happening in Congress about what to do with all of these enslaved people. So you get the 13th Amendment, but it became really clear, shortly after the Civil War that just ending slavery wasn't enough because what was happening in the south was what Harvard historian Annette Gordon-Reed calls a slow-motion genocide. The violence that was raining down on Black folk was just horrific and president Andrew Johnson was fine with it. So Congress starts getting the reports about the violence and that was when something flipped for them. They realized that Johnson was really comfortable with the re-enslavement of Black people and acting like the Civil War never happened. So they did several things and one of those things was the 14th Amendment.

The first piece of the 14th Amendment establishes that if you are born in the United States, you are a citizen...it established birthright citizenship. What the 14th also did was it said, “you may live in Mississippi but you are an American citizen with all of the rights of American citizens.” ...It had been that the state was always running stuff but now the feds were asserting their authority and insisting upon due process… So the 14th is just transformative. There's a wonderful book by Eric Foner called The Second Founding where he lays this out so beautifully.

Then there's the 15th Amendment which deals with the right to vote… It became very clear that as long as Black people could not protect their rights via the vote...all of the language about rights could not be enforced. So the power of the vote, which was in the 15th Amendment, says that the state shall not abridge the right to vote on account of race, color, or previous condition of servitude.

Those Reconstruction Amendments are powerful...but what happens is we had a U.S. Supreme Court that systematically gutted the interpretations of those constitutional amendments so that the 15th Amendment really wasn't about the right to vote at all… You have these various things happening… the poll tax out of Georgia, the literacy test out of South Carolina… [Political leaders] knew “we can't be as explicit as we used to be saying, ‘we don't want Black folk to vote’” because even the 15th Amendment says that we cannot abridge the right to vote on account of race. So how do you stop Black folks from voting? ...Use the legacies of slavery and make those legacies the access to the ballot box. It's going to look race-neutral enough but be absolutely targeted at stopping Black folks from voting… We're going to make it sound legitimate. We're going to talk about all of this mass corruption in our elections saying “we've got voter fraud everywhere.”

Now that poll tax sounds reasonable...but after you have endured centuries of unpaid labor, then the Black Codes coming out of the Civil War, and then sharecropping, that nominal fee is not so nominal. It was two to six percent of a Mississippi farm family's annual income. Think about paying two to six percent of your annual income to vote... And, the poll tax was cumulative so if it took you 20 years to amass the resources to pay, you owe 20 years of back poll taxes before you could vote.

So to understand the Mississippi Plan is to understand it's not one thing or two things, it's an array of policies, all cloaked in legitimacy. And in 1898, for instance, the U.S. Supreme Court ruled that the literacy test and the poll tax did not violate the 15th Amendment because everybody had to pay and everybody had to read sections of the Constitution. By the time we get to 1940, the Second World War has begun and...this is the place where 90% of African Americans lived. Only 3% were registered to vote because of the power of the Mississippi Plan.

We often think of Jim Crow in terms of the violence, and the violence was real. But it's the bureaucratic violence that provided the kind of legal cover to deny American citizens their right to vote.

KM: Here’s a question from our audience—“I'm a 59 year old white man who has re-learned American history through academics. How can I get on the right side of history? What can I do?”

CA: You're doing it… It is consistently reading, engaging, thinking about your role in this society. When you hear something that is just whack, being able to engage it from a place of fact… You know that what is happening there is an exclusionary history: one that erases the roles of indigenous people, the roles of Chinese immigrants, the roles of Mexicans who were in Mexico, and then there was the revolution that turned it into Texas, and then to the United States.

When you hear somebody talking about, "We want a patriotic history," you're doing the work to be able to say, “what you really want is...a myth.” If we're really going to do the work that this nation needs, we need to have a vibrant history.

I liken it to voter suppression in that what voter suppression does in silencing American citizens is that it creates a choir where we only have sopranos. Imagine only sopranos singing for years. You have a very limited playbook, and it leaves everybody else out. But imagine now, having a choir with baritones, and altos, and tenors, and bases, and the sopranos. Now you've got a rich, vibrant sound and you've got a music book that has an array of songs that all can sing. That’s a very different kind of America and that is where we need to get to.

Facing History and Ourselves invites educators to enjoy this conversation in its entirety by accessing our on-demand webinar, The Struggle for Racial Justice and Voting with Dr. Carol Anderson.

Looking ahead, we invite educators to join us October 29th for our virtual event, Facing History Now: Conversations on Equity & Justice - Whose Voice Counts, produced in partnership with Frontline PBS and featuring Dr. Jelani Cobb.

Pictured above: Dr. Carol Anderson and the cover of her book, One Person, No Vote: How Voter Suppression is Destroying Our Democracy (Bloomsbury Publishing, 2019).