Home > Our Blogs > Facing Today > Facing History From Day One: An Interview with New Haven Academy

Facing History From Day One: An Interview with New Haven Academy

I recently had an opportunity to sit down with Greg Baldwin and Meredith Gavrin, the husband-wife team who co-founded the Connecticut school New Haven Academy in 2003. 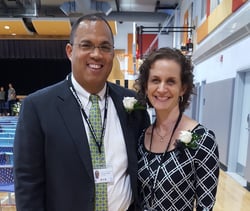 Recently profiled in The Wall Street Journal as an excellent example of purpose-driven schools, New Haven Academy is a highly innovative public high school that serves a diverse student population in a state where disrupting school segregation has remained a challenge into the 21st century.

In this interview, Baldwin and Gavrin discuss their path to founding the school, the challenges they faced, and the vital role that Facing History’s targeted support, professional development, and classroom resources have played in shaping their distinctive school culture, curriculum, and pedagogy since their inception.

MG: We had been working at the Institute for Collaborative Education (ICE), a small startup public school during the wave of small school creation in the mid '90s in New York City. Greg got to that school in its second year, I got there in its third year, and we were young teachers having the experience of helping to create a school from the ground up. We had each taught prior to that as private school teachers right out of college but that experience of being in the founding faculty of ICE gave us the idea that maybe we can take what we've learned here, replicate the best of it, fix some of it, and start another small school somewhere through the charter school movement. We got to Connecticut in 1999 just when the state had decided to put a hold on any request for new proposals and ended up starting our school as what's called an Interdistrict Magnet which is part of the public school system here.

KS: How would you describe the community context in which you operate, as well as the student populations that make up your school?

MG: People in Connecticut live in very segregated ways and the Sheff v. O'Neill case, which came before the state Supreme Court in the 1990s, essentially found that the state was not doing an adequate job of guaranteeing racial and economic integration in the public school systems. Since then, the state has been under court order to do a better job of creating opportunities for students to be educated in public schools across racial and economic divisions.

Instead of doing something like busing and redistricting which were very difficult politically, the state decided to rely heavily on systems of choice. One thing that they have created is this Interdistrict Magnet structure where, in many cases, it's an established collaboration between a specific set of districts to facilitate greater diversity. This is the type of school that we are.

We have about 65 to 70% of our students entering our school from the city of New Haven through a lottery and the rest are coming from any of the 25 surrounding communities. Because New Haven's school population is something like 85 to 90% students of color and many but not all of the surrounding communities are the reverse, giving families the opportunity to cross those district lines translates to greater racial, ethnic, and economic integration.

We knew that we wanted to have Facing History be a part of the school from the beginning. It's not enough to put families and students side by side, you have to give them the opportunities and the language to talk about what that looks like, to talk about identity, to talk about the complexity of all of those groups that we belong to, and all of those lines that we're crossing.

KS: What prompted you to seek the support of Facing History as you formed New Haven Academy and how has it informed your school culture?

MG: Our vision has always been to prepare students both to be successful in college and to be active citizens who are informed, thoughtful, and participate in their communities. In addition, we wanted to have a theme of civic engagement and social justice, and knew that Facing History was the best way to do that. We knew that we wanted students and staff to have the coursework, language, and tools that the program fosters from the beginning. It was the best professional development either of us had ever been exposed to up to that point, and we knew that it was not only about the content and themes, but also about the pedagogy.

We knew that giving ninth graders a Holocaust and Human Behavior course right off the bat was something that would give them this shared experience and bring that into the culture of the school, and then we have other courses in the scope and sequence that we developed with Facing History from there. But the idea was really that it was the best tool for making sure that we had a shared way of talking about what the school valued.

As we got started and we started to define the curriculum, we did things like make sure that teachers got trained in a Facing History seminar. Meanwhile, Facing History gave us the collaboration of a Program Associate typically in the New York office. We sent every teacher, regardless of whether they were going to be teaching Facing History directly, to the organization’s professional development because we wanted to have a common language and shared experience throughout the school. What we try to do within every full-time staff member’s first year of joining us is get them to a Facing History seminar in some way, shape, or form.

KS: Can you describe the students’ arc of learning through Facing History curricula and the impact you’ve witnessed?

GB: Students take a seminar based around Holocaust and Human Behavior in addition to a unique seminar that Meredith and our History team created for 10th graders that focuses on justice, and then the U.S. History course is really informed by a lot of other Facing History resources, especially the work on Reconstruction and eugenics. Then there's the year-long civics course and Social Action Project, all driven by the theme of Choosing to Participate. We've had students go back to their own middle school to lead a series of lessons on bullying prevention because they had been bullied when they were there. We've had students create podcasts on voting rights and environmental racism. We had a student who, a couple of years ago, combined her concern about access to mental health care among African Americans with her dance major at a local arts program by creating a dance piece about it.

MG: These are classes where kids are getting to ponder questions like: What is justice? Is revenge more important or is truth more important? How is your identity and the way you see it different from the way that others see it? Does it matter how others understand you and your identity? These are really powerful questions for students and our Facing History classes afford us the time and space to be able to do that without being beholden to other external curricular drivers. I think that, over time, the Facing History classes and the ways in which those ideas permeate our other classes do give students a language for understanding things like identity, race, ethnicity, gender, and sexual orientation in its full complexity, but it does take time.

What we see is that by the beginning of junior year, if a freshman says something in the hallway that they shouldn't say about someone or to someone, a junior might wheel around and say, "We don't say that here; that's not okay at New Haven Academy." I think a lot of that comes from the long-term engagement with Facing History questions.

KS: What feedback have you received from parents who have witnessed changes in their children after enrolling at New Haven Academy?

MG: I would say there are three particular things that we hear consistently from some parents that I would say are related to the Facing History culture of New Haven Academy. One is that we often hear parents say that their child is finding their voice. They talk about kids who came in shy or soft spoken and really learned to express themselves and express their points of view. Another is that a lot of parents whose kids experienced some form of bullying in middle school talk about how different an environment this is. That includes students with disabilities and students who have been outliers in their school communities in other ways. Parents talk about how much more of family or community or nurturing environment their child experiences here. I would say the third thing is that parents sometimes talk about kids bringing conversations from the classroom home. That's always exciting to hear because it means we've really got it right in terms of it not just feeling like an academic exercise but something that’s resonating with kids and that they're still thinking.

KS: What insights would you share with administrative teams interested in embarking upon collaboration with Facing History to build or transform their school?

GB: Facing History is not an additional thing you do; it's a way you do things. It's a way you approach what's happening.

MG: To me, anything is going to fail in a school if it's seen as something that is an add-on. Teachers can't keep absorbing stuff when it all just feels like it's getting stacked on some vertical stack of obligations. Facing History fits what we do, not only because it was there from the start, but also because it's central to all of the goals that we have. There are these smaller goals in terms of content that we want kids to have or language we want them to have, but it's also in service of the entire vision, which is about the kinds of graduates we want our students to be. And so I think that a school considering taking on a Facing History addition to their program would really have to see it as, “this is the way that we're going to start to address these goals we've always had and come at them differently and integrate this deeply.”

You really need to want to embrace what can be a very complicated and sometimes messy, long game to do this work. You're not going to say, "We're going to do this six-lesson arc and then give this quiz at the end” and feel like our work is done. It takes a real commitment and I think that Facing History's respect for teachers permeates so much of what they've always done. We ask: How are we going to approach other parts of U.S. history so that it resonates? How are we going to choose novels in the 10th grade? What does it mean when something happens in the world that we have to respond to in advisory as a current event? How do we consistently use the ways of thinking and the ways of speaking that we know from this work?

Facing History and Ourselves invites school leaders to assemble a team from your school to attend our virtual workshop where you can explore the approach that has been transformative at schools like New Haven Academy. Learn how we help school leaders achieve their strategic goals through our unique approach to SEL, equity, and civic education at these upcoming events.