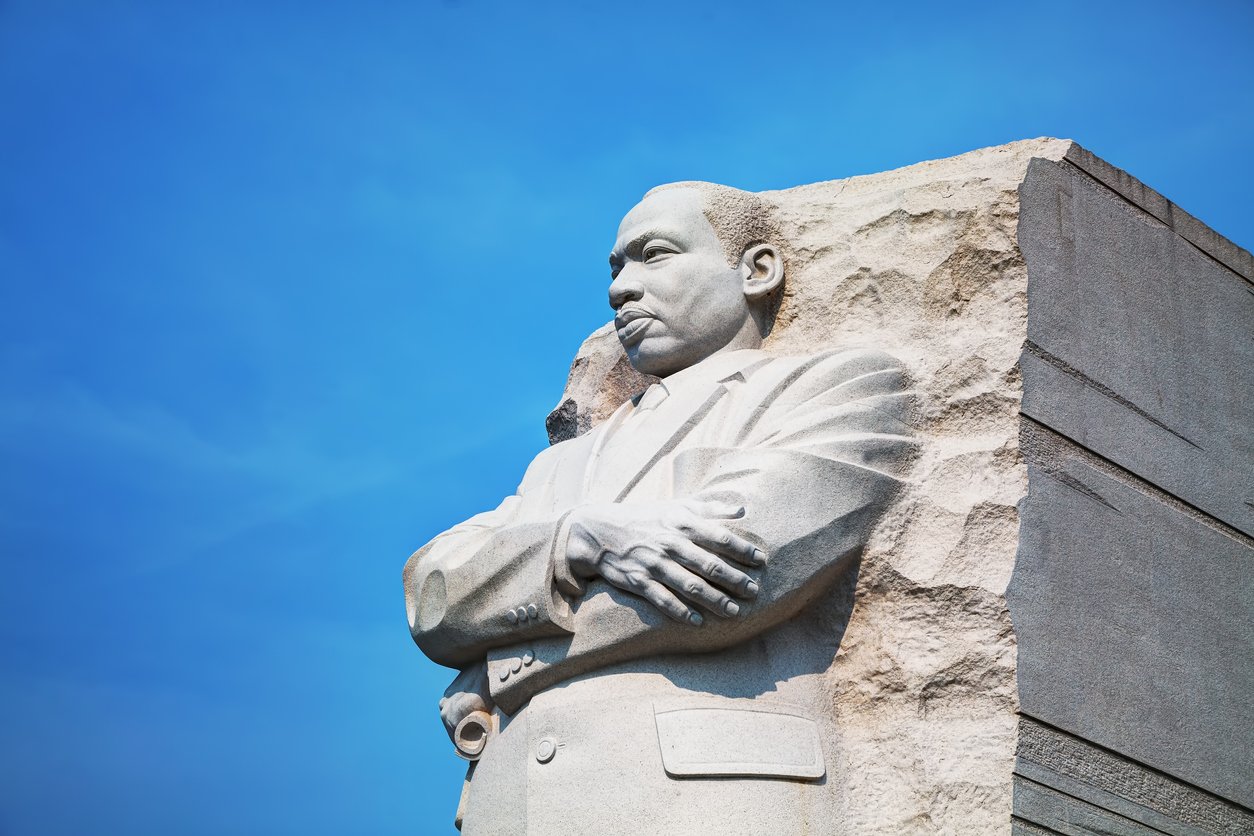 “Freedom is not won by a passive acceptance of suffering. Freedom is won by a struggle against suffering.
By this measure, Negroes have not yet paid the full price for freedom.
And whites have not yet faced the full cost of justice.”
―Dr. Martin Luther King Jr., Where Do We Go from Here: Chaos or Community?

As we celebrate Dr. Martin Luther King Jr. Day this Monday, January 18, there are a great number of issues to consider in this time of social tumult and uncertainty. It is often tempting to invoke civil rights leaders like Dr. King in an effort to proclaim how far we’ve come, yet the events of the last year are inviting more and more people to look askance at these narratives of triumph. In light of the series of police killings, other state violence, and racial protests and uprisings that unfolded during summer 2020, this MLK Day ought to prompt us to turn to Dr. King—not as an emblem of American progress or exceptionalism—but as a wise guide who can alert us to the blindspots that obscure the true nature of where we’ve been, where we may be going, and the work that faces us now.

How would Dr. King speak to the events of the last year in the United States?

One key insight that King shared with us is the notion that those in power don’t give up their power easily. The road to freedom, he insisted, is a struggle and, in Dr. King’s time as in ours, we have to fight for it. King’s understanding of the modes of resistance that can play a role in freedom struggles was more complex and nuanced than many of us may realize. In his own time, King commented on the social conditions that pushed some Black people to the point of hopelessness and rage—circumstances reminiscent of our own times in which Black Lives Matter protesters and unaffiliated demonstrators have drawn criticism for their acts. Rageful protest, King argued, was one of many possible actions that emerge in justice movements and lie on a continuum that encompasses a whole host of strategies.

In his book Where Do We Go from Here: Chaos or Community?, King sought to complicate our understanding of what Black peoples’ protests meant in his time, and where responsibility for such events may truly lie. In contrast to the prevailing wisdom of his time, he wrote: “It is important for the liberal to see that the oppressed person who agitates for his rights is not the creator of tension... How strange it would be to condemn a physician who...discovered cancer in a patient. Would anyone be so ignorant as to say he caused the cancer? ...We did not cause the cancer; we merely exposed it.“

As we begin 2021, we are not only seeing the forms of civil disobedience previously mentioned, but also a violent, white nationalist-fueled insurrection geared toward disrupting and dismantling the democratic process. I believe that Dr. King would appraise these two modes of response very differently. For Black protesters who continue to be denied justice and human dignity, whose ancestors endured four hundred years of slavery, followed by Jim Crow racism, and ongoing systemic oppression, to undertake direct action is not only understandable but a crucial component of the Black freedom struggle. By contrast, those who took up arms and seized the U.S. Capitol, brandishing Confederate flags and other white supremacist iconography, in an effort to halt the advancement of multiracial democracy have no rightful place at the table. And yet, even as despicable as this insurrectionary campaign has been, I suspect that Dr. King would also invite us to pair virulent criticism with the empathy and intellectual curiosity that we will need to move toward repair.

In the spirit of repair, another key theme that Dr. King might draw our attention to in this moment is our common humanity—even in times when it may be challenging to believe it—and the continuing relevance of struggles for justice that cut across racial lines. When Dr. King visited Memphis, he was preparing to organize the Poor Peoples’ Campaign to demand that this country address economic inequality—a vision that aimed to bring poor Black, white, other people together under a single banner. He insisted that poverty didn’t always know any particular skin color and that white supremacy culture—and the lopsided power and privilege inherent in it—are not just about whiteness and white skin color. He taught us that it’s also about oppressing all kinds of people at different levels of society, fueling a host of bigoted attitudes  beyond a black/white axis, antisemitism among them. King understood the historical connections between racism and antisemitism and once said: “As the tensions and bewilderment of economic problems become more severe, history[‘s] scapegoats, the Jews, will be joined by new scapegoats, the Negroes." This nuanced understanding of the depth and breadth of white supremacy is one of the threads that will help us advance the work of healing and transformative justice in this country.

These insights from Dr. King inevitably raise questions about how we ought to move forward. In Where Do We Go from Here?, Dr. King addressed the vital responsibilities of governments and leaders at all levels of society. There, he argued that a genuine leader is “not a searcher for consensus but a molder of consensus” and enjoined his readers to become what he called “creative dissenters.”

King’s charge is not an easy one to answer. As all leaders know—whether we are operating at the local level as teachers in classrooms or leading whole nations—it is often much too easy to follow the path of least resistance and hope that, one day, it will be easier to speak truth, prioritize justice, and take a stand. But King knew that, for most people, that day never comes. In his “Letter from the Birmingham Jail,” he wrote that human progress “never rolls in on wheels of inevitability” and that “now is the time to make real the promise of democracy and transform our pending national elegy into a creative psalm of brotherhood.”

As we sit with the social upheaval of the last year—and the threat of ongoing unrest over the coming weeks and beyond—let us heed Dr. King’s words. Let us embrace the questions, speak truth courageously, and lead with curiosity as we press on into 2021. Let us also stand ardently against those who would seek to weaken our democracy and undermine the forward march of progress. We are faced with a choice between chaos and community, as King put it. Which of the two we realize will be entirely dependent upon our level of courage and unceasing commitment to justice, equity, and democracy.

Tell us how you are centering these values in your own work in the comments.

Facing History and Ourselves invites educators to use our teaching unit, "Eyes on the Prize: America's Civil Rights Movement 1954-1985", to bring the work of Dr. Martin Luther King, Jr. to life in the classroom.