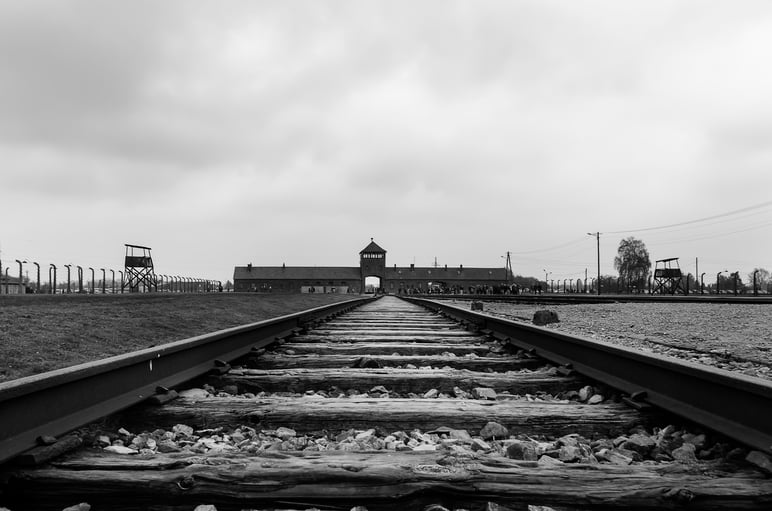 JH: Can you tell me a little bit about yourself and how you ended up teaching Holocaust Studies at Tarbut V’Torah?

LW: I was fascinated by Holocaust Studies when I was in my early teens. I read an excerpt of Anne Frank’s diary, and I remember feeling really scared but really compelled. I wanted to know everything I could about this girl: Why was she hiding? Why was this happening to her? My parents got me books about the D.C. Holocaust Museum, which was opening at the same time. I read everything I could, and I still couldn’t read all of it. My whole life, I felt like if I would teach anything it would be the Holocaust.

JH: Can you describe the antisemitic incident and how you responded?

LW: A student texted my colleague and said, “I just received this photo on my social media account.” She said, “I don’t know what to do. Oh my gosh, this is happening right now.” My colleague sent me this picture. I guess more pictures came out over the course of the night. It was pretty late. The next day, I reached out to the principal of Newport Harbor High School because, apparently, a lot of the kids at the party went to Newport Harbor. I said, “I just want to offer my services personally, if I need to teach anybody about the Holocaust, or if I need to come in. I don’t know what you need me to do, but I’m there.”

Later that evening, I get an email saying there is a group meeting tonight with some parents and the kids who were involved in the incident. I called and a girl who was at the party answered. I said, “I’m Leslie. I’m a Holocaust Studies teacher. I work at the Los Angeles Museum of the Holocaust. I teach at Tarbut V’Torah.” She goes, “yes, come over right now!” The response of the parents and kids was they wanted me there. They were very inviting.

JH: How did you approach teaching these students after what they had done?

LW: One of the things these parents and I decided was to protect the kids, because they were kids first and foremost. They were getting a lot of death threats, and people were threatening violence. That wasn’t an appropriate response, we thought. Berating them and anger was not the answer. And I knew what the answer was: they really don’t know about the Holocaust. Because if they were in my class, and they did know, they wouldn’t have done this.

I told them, “what you did ripples through the community, especially with a symbol like this, which can mean nothing but Nazism. Nothing but ‘death to the Jews and anyone different.’” I looked around at the students and said, “I’m looking at you guys right now, and I know you’re not Nazis. I know that we as adults probably didn’t teach you properly, and I’m here to do that now.” I asked them about their Holocaust education, and what kind of history class they were in. I know often teachers have limited time to teach the Holocaust, or even World War II, because they’re on such a tight schedule.

JH: How did you help the students deepen their knowledge and move toward repair?

LW: They decided they wanted to put an apology in writing. They wanted to say they were sorry. One of the kids sent our head of school an apology letter. Our head of school decided to take him up on it and bring the kids here to Tarbut, to give them a tour of the school—because we were founded by a Holocaust survivor—and also, a two-hour intensive lesson on the Holocaust with me. So they ended up coming to our school, spending the day with me, and learning.

Eventually, I was in touch with my colleagues at the L.A. Museum of the Holocaust where I also worked. We got the kids there the next week. Their visit also included a session with Auschwitz survivor, Renee Firestone, and this came days after their visit with Anne Frank’s step-sister, Eva Schloss. She spoke to them, and I heard she was pretty harsh on them initially. She gave them a little tough love.

Shortly thereafter, we held a lesson with our students at Tarbut V’Torah on forgiveness and repentance, and how important that is in the Jewish community. Some select students from our school wanted to meet these students face-to-face and ask them as kids, as peers, “what were you doing?” The students involved in the incident came for dinner. They came just to chat and to hang out. It was really nice, what we witnessed was a lot of kid-to-kid understanding. Each side was asking the other questions, and then a lot of kids ended up exchanging information.

JH: What advice would you give other educators who confront similar instances of antisemitism?

I think everyone is so quick to that mob mentality of social media. If someone messes up, everybody’s all over them, and they don’t really get a chance to apologize or redeem themselves. In this case, I thought, “are we really offering to educate them?” Also, and this is something I learned from Facing History, is making and establishing your classroom as a safe place.

Facing History invites educators to deepen their approach to Holocaust education with our industry-leading Holocaust and Human Behavior program. It features our seminal case study by the same name, along with a vast array of classroom-ready lessons, videos, and professional development opportunities.