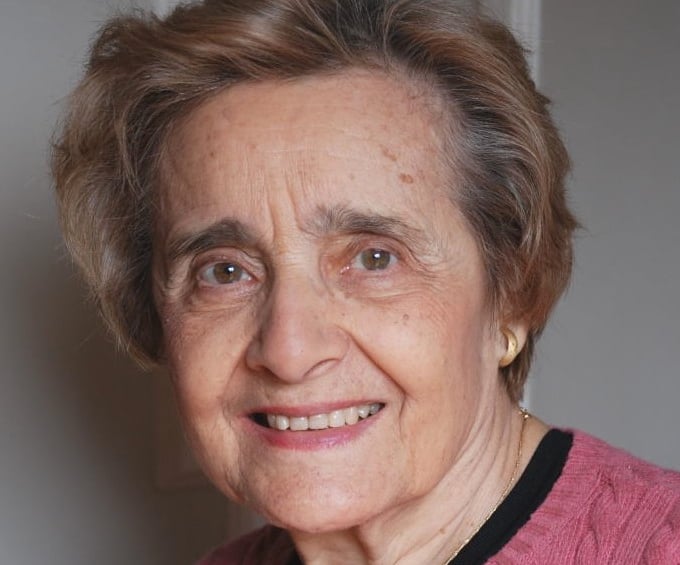 In a recent interview, I spoke with Dr. Anna Ornstein—an Auschwitz survivor, acclaimed psychoanalyst, psychiatrist, and author of My Mother’s Eyes: Holocaust Memories of a Young Girl. The impact of the Holocaust on Dr. Ornstein was profound. She and her mother were the only members of her family who survived and immediately after the war, she reunited with her boyfriend Paul and they married. She then pursued medical school in Germany despite the deeply antisemitic climate and was able to persist with the loving support of her husband. Dr. Ornstein later immigrated to the United States where she continued her clinical training while raising her family. She now has three children and five grandchildren. Dr. Ornstein’s life and ideas are the focus of the forthcoming short film by Facing History If Not Me…

In this interview, we discuss the relational skills essential in times of crisis, the capacity of young people to drive change, and the enduring power of survivor testimony.

KS: What is one particular lesson that you can share from your time in Auschwitz that you feel is especially vital for people living today?

AO: A single person in a concentration camp didn’t have a chance for survival. You absolutely had to belong to a group which meant sharing because nobody looked out for us except that small group that you were attached to and, you know, this group would be the mothers, the sisters, the cousins. They would be the ones who would carry the weak one during a death march. Saying “it’s mine” made good sense when starvation was a major item and we were all very very hungry all the time. But it was very clear from the beginning that unless you had a group in a camp situation, you didn’t have a chance.

KS: In your work as a psychoanalyst, you have explored moral decision making and drawn upon interactions you had with particular Germans you encountered. Can you share an example of this and how you made sense of it?

AO: There’s a gentleman we met in Germany who decided he wanted to study with us and brought his family with him. He kept saying that he wasn’t a German and that he was from Austria. After they left, I got a long letter from him—he had to make a confession. He grew up in a Nazi family and I didn’t know even though we lived together for all that time. He never told us the truth and, in the end, he left.

The idea that you had to give babies to the Fuhrer was widespread and he was one of these children. His mother would tell him that “I had you not so I can raise you, but because the Fuhrer needed babies.” This was the commitment that Germans had and this notion that a woman’s primary mission in life is to produce babies is the kind of commitment that today’s leaders also ask for… not that we necessarily produce babies for them, but that we perpetuate the violence in various ways.

KS: You note in your paper that young people are your greatest hope in our dark political climate. What can we do to help young people meet the challenges of the present and future?

AO: The paper I’m now writing addresses some of these things but while writing it, I was worried that my perspective on young people has been limited because I just have amazing grandchildren… I got a letter from my grandson, Benjamin, in which he shared an illuminating perspective. He was addressing some of the problems facing our nation and wrote: “...much of the political conflict doesn’t affect me every day because I am shielded from it due to my privilege… I think it is particularly easy for young people who come from a place of privilege to not engage with political issues of the day and we need to make sure that doesn’t happen, especially with regard to voting.”

I found his letter very helpful because he makes the point very clearly: if you’re privileged, you don’t pay attention as much as the people who are not protected from harmful political maneuvers. I had thought that my grandchildren might not be representative of young people at large because they grew up learning about these things in my family, but I feel that what Benjamin is saying is representative because he’s saying that none of us know what is going on unless we make a special effort—but that it is up to us to address that.

KS: Can you speak about the impact you’ve had on people with whom you’ve shared your story and how it has made you feel?

AO: I don’t pay enough attention to that but I am always reminded of the fact that I am affecting young people just by telling the story. When it’s your story, you don’t value it and take it for granted. After presenting one of my papers on mourning, I received a standing ovation...and it was lovely but I didn’t quite get it. When they finally sat down, I said: “Thank you for the applause...but I’m just one person who represents those who cannot speak for themselves.” This is how I feel about myself at this point.

It took me a long time to consider that events or stories happen to those who know how to tell them. I am just lucky I know how to tell the story. Many people like my little book because it simply tells stories that are very close to my heart… By nature, I am committed to the intellectual perspective on everything, so maybe it was just lucky that I wrote these simple stories but then was trained as a psychoanalyst so I had the intellectual tools to express what I was experiencing. When these young people come from the school to see me, I still wonder why they would take time to talk to an old woman for an afternoon. But they keep asking me “can I come again?”

Facing History and Ourselves invites you to use our lesson, "Survivor Testimony and the Legacy of Memory," as well as our curated list of memoirs by survivors in your physical or virtual classroom.