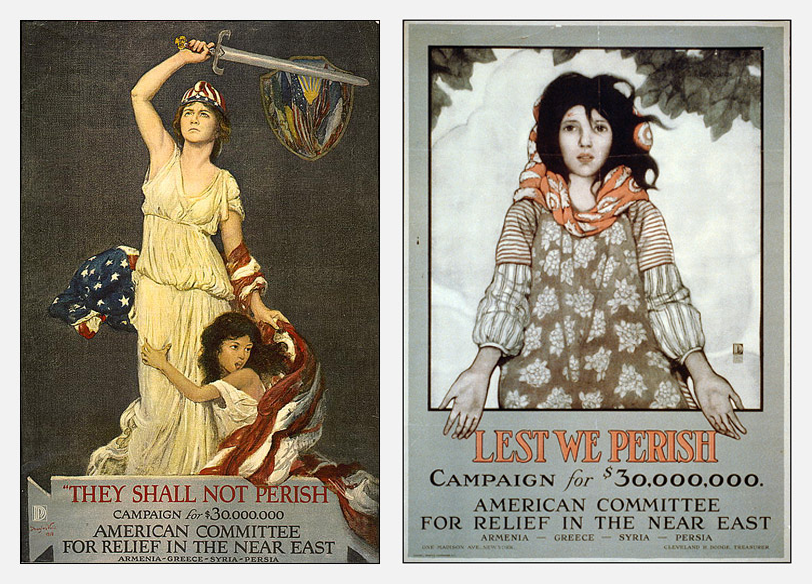 Despite receiving first-hand reports of the atrocities for years, world powers did nothing more than condemn the Ottoman Empire for its massacre of their minority population, largely consisting of Christian Armenians, Greeks, and Assyrians. When governments failed to act, a group of selfless Americans rallied the nation to save a generation of victims of ethnic cleansing in war-torn Asia.

Motivated by nothing but a moral sense of duty, these men and women, among them industrialists, ambassadors, missionaries, teachers, nurses, admen and presidents, helped bring care and comfort to millions of suffering refugees in extremely harrowing environments. This group, the Near East Relief Committee (NER), raised $117 million in funds and supplies, worth over $2 billion in today’s currency. They ultimately saved over a million lives, of which 130,000 were orphans.

How did they do it without the Internet, social network platforms, and the instantaneous connection that we enjoy today? The NER launched a philanthropic campaign using new modern mass media tools to make people acutely aware of the plight of Armenians. The NER successfully broke new ground in fundraising to build one of the most successful international relief efforts in modern history. Here are some of the ways they achieved this:

The NER strategically provided journalists with harrowing accounts of the atrocities committed against the Armenians. In an age when most Americans received their news from newspapers, stories appeared regularly, if not daily, in newspapers such as The New York Times, The Washington Post, The Los Angeles Times, The Globe and Mail, and The Toronto Star. The New York Times published 145 articles in 1915 alone. Journalists described the actions against the Armenians as “systematic,” “authorized," and “organized by the government.” Newspapers kept the plight of the Armenians alive in the consciousness of Americans.

Modern advertising techniques of that day produced simple but compelling images that appealed to people’s consciences. Advertisers focused on the victimization of women, children, and the unique role of the United States as protector of the Armenians. What could be more important than the safety and welfare of children?

In 1917, Near East Relief expanded their outreach in a groundbreaking way. They turned to Hollywood and brought widespread attention to a major human rights relief project with the emergence of modern cinema. “Ravished Armenia,” also titled “Auction of Souls,” tells the true story of Aurora Mardiganian, a young Armenian girl who was forcibly deported from her ancestral home in Armenia after witnessing the murder of her family and friends. Aurora was raped, sold to a Turkish harem, and forced to convert to Islam. Aurora Mardiganian, who played herself in the leading role, sadly suffered a nervous breakdown from reliving her trauma. The film was a critical and box office hit that created a new awareness of the atrocities and raised much needed funds.

Long before Angelina Jolie and George Clooney made it the norm for Hollywood celebrities to endorse humanitarian causes, there was Charlie Chaplin’s lovable sidekick, child actor Jackie Coogan, known as “the most famous boy in the world.” The NER commissioned Jackie to lead a Children’s Crusade in an appeal to the children of America and foreign nations for a million dollar shipload of foodstuffs for the destitute orphan children in the Near East. Jackie proclaimed: “We who are in this Children’s Crusade of Mercy must do our best for these orphan children. We shall do for them as we should like to have them do for us if we were orphans. The Children’s Crusade must provide food for those inside the orphanage doors and relieve the sufferings of those outside.”

By 1927, organizations representing over 75 million Americans were supporting the Near East Relief efforts at a time when the population of the United States was only 117 million. Mass media became the tool by which ordinary Americans adopted the ethos of giving and sacrifice to those beyond their own borders.

Today, the images of war and mass atrocities can reach us in seconds through our social media feeds and 24-hour news cycles. Modern media allows us to witness the thousands of displaced refugees in Syria, the forced banishment of the Rohingya in Myanmar, the mass slaughter and rape of Darfuri men, women, and children in Western Sudan, and the persecution of ethnic and religious groups globally. As we commemorate the anniversary of the Armenian Genocide today, let’s appreciate mass media’s ability to expand our Universe of Obligation and to care for the neediest in our global community.

Use our lesson, "American Responses to the Armenian Genocide" from our unit, Crimes Against Humanity and Civilization: The Genocide of the Armenians, to  help students analyze choices made by Americans during this time in history. Also, consider watching the documentary, "They Shall Not Perish," which can be seen exclusively on our website (login required). This film provides an in-depth look at the Near East Relief response to the crisis.