Home > Our Blogs > Facing Today > Latinx vs. Hispanic: A History of Terms 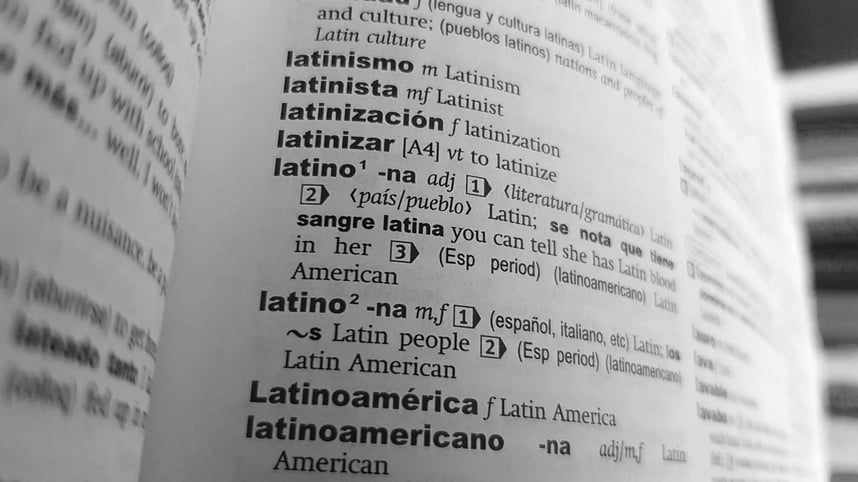 “This is what our teachers must understand: that language is never neutral.
That no matter how skilled we can become in understanding the complexities of language,
we cannot forsake the liberating or oppressive power of language.”
— Paulo Freire, The Pedagogy of the Oppressed (1970)

When the late Brazilian educational philosopher Paulo Freire shared the above sentiment in his 1970 book The Pedagogy of the Oppressed, he gave voice to a concept that is not only broadly applicable to people wrestling with social questions, but also applicable to some of the debates currently unfolding within the Latin American communities of which Freire himself was a part. Shaped by a complex history, there is a debate unfolding in the U.S. today surrounding the use of terms such as Hispanic and Latinx, raising important questions about the factors that shape peoples’ self-definitions as well as the breadth of lived experiences of those who identify with these terms.

The widespread use of the term “Hispanic” began in the U.S. in the 1970s when the Mexican American Legal Defense and Education Fund (MALDEF) and other organizations lobbied the federal government to have their community included in the U.S. Census as a distinct ethnic category. Up until that moment, all Hispanics and Latinos had simply been counted as white on the Census, along with all other Americans of European ancestry. This status quo, the activists argued, posed immense problems for their communities due to the impact of Census data on the allocation of federal funds and the drawing of legislative districts. Following the mobilization of MALDEF and their contemporaries in 1976, Public Law 94-311 was passed, mandating the collection of data about “Hispanics” which the law defined as “Americans who identify themselves as being of Spanish-speaking background and trace their origin or descent from Mexico, Puerto Rico, Cuba, Central and South America, and other Spanish-speaking countries.” The full Census conducted in 1980 would collect information on U.S. Hispanics for the first time.

By the 1990s, however, critiques of “Hispanic” as an organizing concept began to emerge onto the public stage. Since “Hispanic” signals the presence of Spain as a colonial power and its language in a given country, critics began to call for terminology that accounts for the impact of colonization and the divergent ways that Hispanic peoples, including those living within “colonizer” and “colonized” cultures, may experience the world. For example, a white Spaniard who has immigrated to the U.S. from Spain may experience life in the U.S. in ways that depart significantly from the experiences of a brown-skinned Mexican person who has also immigrated to the U.S. due to the different roles that the groups they belong to have played in histories of colonization, imperialism, racism, and other factors. It was out of this crucible that the term “Latino/a,” and its various alternative constructions, emerged to name those descended from Latin American populations, many of whom became Spanish speaking through a process of colonization.

Beyond the question of how histories of colonization have shaped this terminology, there are also important issues of gender that have surfaced in this linguistic story. Like most of the romance languages, words in the Spanish language are gendered masculine or feminine, presenting vexing challenges for anyone who would like to articulate experiences of gender that defy this binary. As the term “Latino/a” gained currency, a push to upend the masculine/feminine binary that is baked into the Spanish language began and this resulted in alternative constructions of “Latino/a.” For example, “Latin@” emerged in the 2000s as a term that could encompass both men and women followed by “Latinx” which encompasses individuals of any gender beyond the man/woman binary implied by the “@” symbol. “Latinx” has now emerged as the most widely used gender-neutral form of the term.

In contrast to “Hispanic” which still describes all individuals born in (or who have descended from individuals born in) Spanish-speaking countries, “Latino/a/x” is used to describe individuals who hail from (or whose ancestors hail from) countries in Latin America which includes Central America, South America, and the Caribbean. This term encompasses Portuguese-speaking Brazilians and others who are not considered Hispanic because their societies do not speak Spanish. The language of “Latino/a/x” also helps to give voice to the ways that colonial powers beyond Spain have shaped Latin America and its peoples with the Portuguese colonization of Brazil being a prime example. With these many threads in mind, we can see that “Hispanic” as defined above can be rightly applied to many people who are described as “Latino/a/x” but that the reverse is often not true, as in the case of white Spaniards.

Despite this clear line of demarcation between “Hispanic” and “Latino/a/x,” research from the Pew Research Center suggests that the people these terms are intended to describe often hold conflicting understandings of the terms themselves and self-identify in ways that ultimately call into question the validity of these top-down definitions. The research conducted by Pew revealed that only 23% of U.S. Hispanic adults have even heard of the term “Latinx” and only 3% actually use it, favoring the term “Hispanic” by a wide margin. Further, Pew’s research revealed that “Latinx” has been adopted more widely by young U.S. Hispanics descended from Latin American peoples who were also born in the U.S., are bilingual or predominantly English-speaking, Democratic leaning, and had college experience. One wonders whether the individuals surveyed might have responded differently had “Latino” or “Latina” been the terms under study but the data that researchers did produce raises interesting questions nevertheless.

The differences in terminology used within these communities may, at first glance, seem like a mere matter of semantics—a superficial disagreement about the particular words we use that doesn’t signal a more substantial tension—but in this case, these conflicting self-definitions point to an important truth.

As the activists who pushed for the inclusion of Hispanics as a category on the Census in the 1970s knew, group identification can be immensely powerful as a political resource when it allows us to make shared experiences and opportunities legible. And yet there are intrinsic limitations to assigning a single identity to a highly diverse population that is geographically dispersed, ideologically diverse, and one in which its members are coming to know themselves in wildly divergent settings ranging from Spanish-speaking barrios to elite spaces of American higher education to name only two examples.

The different modes of self-definition that have emerged suggest that the only experts we ought to be consulting to describe people’s experiences as members of a particular social grouping are the people themselves.

What this means in the classroom is that we turn to the student as expert on their lived experience, invite them to name the descriptors that give voice to their identities, and craft lesson plans on the contemporary and historical experiences of Latino/a/x peoples with humility, curiosity, and openness to the wide array of relationships that members of those communities may have to the terms we are employing to tell these stories.

Have you encountered this debate surrounding how we describe Latinx and Hispanic peoples in your school community? What are you learning from students? Tell us about it in the comments.

Facing History and Ourselves invites educators to use our featured collection, Latinx Rights in 1960s California which contains two lesson plans concerning Latinx experience and resistance in the 1960s.

Pictured above: An image of the definition of "Latino" and other related terms in a dictionary.
(Photo credit: Abigail Luke)