More Than Monsters: The Deeper Significance of Wendigo Stories 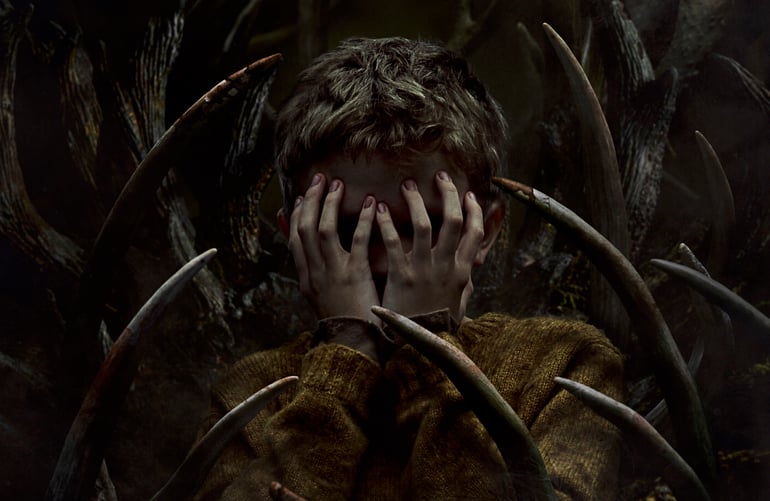 One does not need to delve very deeply into the annals of American film, television, and literature to find an array of caricatured depictions of Native American peoples and a distortion of their knowledge. One recurring theme across these storytelling mediums is the use of the “wendigo”—also spelled “wétiko”—a monstrous figure from Algonquian mythology who exhibits an insatiable greed along with a desire for human flesh. From Stephen King’s Pet Sematary to the television series Hanibal, the flesh-eating image of the wendigo is often presented apart from its original cultural contexts where it carries deep moral significance. The latest addition to this lineup of wendigo tales is Scott Cooper and Guillermo del Toro’s horror film Antlers (2021) in which a Native American character provides some brief exposition before the story centered around a white community contending with the monster begins in earnest. Though these misrepresentations of the wendigo beg for critical interrogation, the wendigo stories of Algonquian peoples offer a window into the endurance of cultural resources used to transmit significant moral values, and underscore the power of Native people using these stories to engage in social critique.

In Algonquian traditions, the wendigo monster emerges not randomly or in violent response to colonialism as it often does in popular media but through a specific set of circumstances that are unique to different tribal groupings. In most traditions, the wendigo is human in origin and becomes a monster through a process that results either from acts of starvation-induced cannibalism or from possession by a spirit. In the course of the transformation from human to wendigo, the person exhibits increasing selfishness, violence, hunger, and greed—particularly for human flesh. This is a story shared not merely for entertainment but to reinforce the communal values that allow the communities in which this practice occurs to live well with one another and within their environments.

The moral lessons contained in wendigo stories are also used to support the task of social critique in the late Native American scholar Dr. Jack D. Forbes’ book Columbus and Other Cannibals: The Wétiko Disease of Exploitation, Imperialism, and Terrorism (1978). There, he uses the cannibalistic wendigo as a metaphor for the behaviors and attitudes central to patterns of social domination visited upon his own people in the Americas and subjugated peoples everywhere. He writes:

“Wétiko is a Cree term...which refers to a cannibal or, more specifically, to an evil person or spirit who terrorizes other creatures by means of terrible evil acts, including cannibalism… I have come to the conclusion that imperialism and exploitation are forms of cannibalism and, in fact, are precisely those forms of cannibalism which are most diabolical or evil… It should be understood that wétikos do not eat other humans only in a symbolic sense. The deaths of tens of millions of Jews, Slavs, etc., at the hands of the Nazis, the deaths of tens of millions of blacks in slavery days, the deaths of up to 30 million or more Indians in the 1500s, the terribly short life spans of Mexican Indian farm workers in the US, and of Native Americans generally today, the high death rates in the early industrial centers among factory workers, and so on, all clearly attest to the fact that the wealthy and exploitative literally consume the lives of those that they exploit. That, I would affirm, is truly and literally cannibalism, and it is cannibalism accompanied by no spiritually meaningful ceremony or ritual.”

More than a commentary on the life of wendigo stories amongst his own people, Forbes deploys the metaphor of the wendigo to advance nothing less than a critique of civilization at large and describes the violence that he argues lies at its foundation as one driven by a kind of wendigo psychosis. In contrast to modern horror stories that appropriate the wendigo as a plot device, Forbes implies that what actually ought to be terrifying to us is that we live in societies enveloped in violence and exploitation that we struggle to identify as such. His line of questioning effectively asks “what if the monstrosity we face is actually not an otherworldly presence but our all too human selves?”

Beyond Forbes, other Native American thinkers have also used wendigo stories to present critical perspectives on various social problems and call for their resolution. One example is Ojibwe activist Winona LaDuke who has called for a decisive shift away from what she has termed “Wendigo Economics” for the sake of the health of the natural world. During a panel at YES! Magazine with fellow environmental thought leaders, LaDuke said:

“There’s this conflict between the cannibals and Mother Earth, and it’s going on everywhere. And we’re on the right side, that’s what we’re working on but sometimes you get that cannibal tendency...”

The question of how to challenge the “wétiko psychosis” as described by Forbes and “Wendigo Economics” as described by LaDuke is a difficult one, but the mythic force of the concept of the wendigo helps to underscore the urgency of these questions. Far from just being a monster in an escapist horror flick, Forbes and LaDuke demonstrate that the wendigo can help us grasp the horrors of our real world so we can be here now and, ultimately, work toward solutions.

Even in the face of ongoing cultural appropriation and erasure, wendigo stories are but one reflection of the survivance, wisdom, and brilliance of Native peoples. And they are worth considering including in one’s classroom teaching. Ojibwe scholar Dr. Brady Santi has developed this guide for teachers who would like to teach students about her community’s unique belief systems with an emphasis on the wendigo as it appears in popular films.

Have you encountered wendigo stories in films, television shows, or books? If so, what did you think about it? Tell us about it in the comments.

Facing History and Ourselves invites educators to explore our case study Stolen Lives: The Indigenous Peoples of Canada and the Indian Residential Schools, particularly our reading "Culture, Stereotypes, and Identity" which features reflection questions surrounding some of the stereotypical media representations that we touch upon at the beginning of this essay.

Pictured above: A portion of the poster for the film Antlers (Fox Searchlight, 2021).