Home > Our Blogs > Facing Today > Racism is Not a Partisan Issue

Racism is Not a Partisan Issue 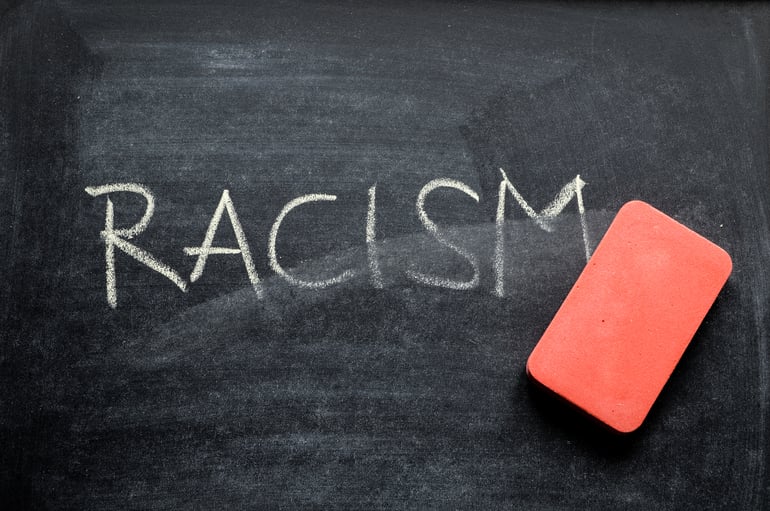 During this election season, educators are navigating conversations with their students about politics, race, and racism in ways that seem without precedent, all while facing real pressures to remain nonpartisan. This tension notwithstanding, it’s necessary to understand race and racism as a political issue of membership and power, rather than a partisan one of liberal or conservative ideology. Doing so creates space to more truly confront injustice in policy and practice. As educators, this critical distinction can help us have the nuanced discussions we aim to have with our students around civic engagement, with a historical lens that contextualizes our moment.

In 1676 Virginia, Nathaniel Bacon, angered over the colonial government’s policy of non-aggression towards indigenous peoples, led a militia of white and Black indentured servants and enslaved Africans, and burned down Jamestown. After the rebellion was quelled, the local colonial lawmakers, realizing the threat of coalition-building across race and class, codified in policy a hard distinction between ‘Black’ and ‘white’ to divide and consolidate power for the wealthy elite.

This early moment represented another thread in a narrative first stitched at Point Comfort in 1619 and woven into the fabric of the country later founded through key political documents, policies, and practices. It was this narrative which divided people along racial lines for political and economic gain, and became a central paradox in a nation espousing life and liberty while condoning inequality and slavery.

The Constitution of the United States was itself a document of political compromises that reflected this paradox: institutionalizing racism, sanctioning slavery, establishing the three-fifths clause to bolster apportionment for Southern states in the House of Representatives, and preserving the trade of enslaved Black people until 1808. These compromises would build into the generations-long tension, percolating tenuously with the Missouri Compromise, the Compromise of 1850, and Dred Scott v. Sandford, and ultimately erupting in the Civil War—a war predicated on the inextricability of politics and racism.

The Reconstruction Era that followed, with its promise for interracial democracy briefly realized, witnessed violent, racial backlash. The contested election of Rutherford B. Hayes as president in 1876—the result of a political deal struck by Northern Republicans and Southern Democrats in Congress to allow the Republican candidate to win with the condition of pulling federal troops out of the South—effectively ended Reconstruction the following year. Tragically, over the next century life for Black people improved little as Jim Crow, poll taxes, black codes, and racial terror lynching flew in the face of the unenforced and narrowly interpreted 13th, 14th, and 15th Amendments. The Lost Cause narrative, meanwhile, found new life across the South in films such as The Birth of a Nation, in the historiography of Columbia Professor William Archibald Dunning, and through memorials to Confederate leaders.

A century after the Civil War, the 1960s was a watershed moment in this interplay of politics and racism, and one worth slowing down for, as the paradox upon which the nation was founded could no longer be outwardly tolerated. This, however, marked not an end, but a beginning of something new. Political orientations had for years been shifting as the Republican Party of Lincoln slowly shifted away from the Radical Republicans of the North, and while the Democratic Party widened to encompass ethnic minorities from across Europe. Both phenomena were impacted by world wars, the economic upheaval of the Depression, and the demographic shifts of the Great Migration. In the 1960s, the Democratic Party, despite having held a coalition between Northern Democrats and Southern Dixiecrats, fractured because of its civil rights platform, and with the passage of the Civil Rights Act of 1964, President Johnson told an aide that the Democrats “have lost the South for a generation.” Two months later, Senator Strom Thurmond, a Dixiecrat leader, formally split with the Democrats to join the Republicans.

Scholars argue that while the Civil Rights Movement may have formally ended Jim Crow, it also gave way to a new form of oppression, just as Reconstruction gave way to backlash and Jim Crow. Politically, what emerged was a transformation of strategy that masked an old game. In a 1970 interview with the New York Times, Kevin Phillips, a political strategist for then-President Richard Nixon, citing the response to the Voting Rights Act of 1965, explained, “The more Negroes who register as Democrats in the South, the sooner the Negrophobe whites will quit the Democrats and become Republicans. That’s where the votes are.”

Originally “Operation Dixie” under Barry Goldwater’s anti-civil rights platform, this new approach became known as the Southern Strategy, the political plan built on courting the votes of seemingly disaffected whites into the folds of the Republican Party. “Without that prodding from the blacks,” Phillips deduced, “the whites will backslide into their old comfortable arrangement with the local Democrats.”

In the 1950s, overt racism was still readily accepted political rhetoric, according to Lee Atwater, a Republican strategist for the Reagan Administration. Atwater went on to infamously reveal in a 1981 interview how these blunt racist tactics underlying the original strategy had since morphed: “By 1968 you can't say ‘[N-word]’—that hurts you. Backfires. So you say stuff like forced busing, states' rights and all that stuff, and you're getting so abstract. Now you're talking about cutting taxes, and all these things you're talking about are totally economic things and a byproduct of them is, Blacks get hurt worse than whites.” Racism had hardly been scoured from politics; different rhetorical means were employed to achieve similar racist ends. Atwater concluded: “‘We want to cut this’ is much more abstract than even the busing thing, and a hell of a lot more abstract than ‘[N-word]’.’”

While more nuanced than pandering simply to racial angst, the strategy was an evolution of that old way into a new code that would be revived again and again on both sides of the political aisle, continuing to today. We hear it in rhetoric from welfare queens to superpredators, from law and order to voter fraud. We also see it reflected in policies from redlining to the War on Drugs, voter integrity initiatives and beyond. The common thread in these examples are racially coded, “colorblind” politics, resulting in disproportionate, negative impacts for Black and brown communities in housing, healthcare, education, criminal justice and more.

Reflecting on the almost natural evolution of the Southern Strategy from its historical origins, Phillips—the Nixon strategist—noted, “This is not a strategy or a blueprint, just the deciphering of an inexorable trend that will run its course and then be displaced by a new cycle whose origins are already with us, somewhere.”

Now, as the right to vote is more directly under threat for so many, as the very mattering of Black life is questioned, educators are called to confront the fundamental relationship between politics, race, and racism. James Baldwin wrote, “We can disagree and still love each other unless your disagreement is rooted in my oppression and denial of my humanity and right to exist.” Human dignity is not a partisan issue, and for us as educators to stand up is urgent and necessary.

There is no denying the difficulties educators face when navigating this election season, undoubtedly extending beyond November. But we can ask ourselves: How do politics show up in my classroom, and do I interrogate this? How can disagreement be rooted in love? And when it’s not, where and how do I stand up against what is bigoted and exclusionary?

It takes courage to stand up, to engage fully and unapologetically, with love and critical consciousness. But do so we must.

Facing History and Ourselves invites readers to use our resource collection, The Reconstruction Era and the Fragility of Democracy.