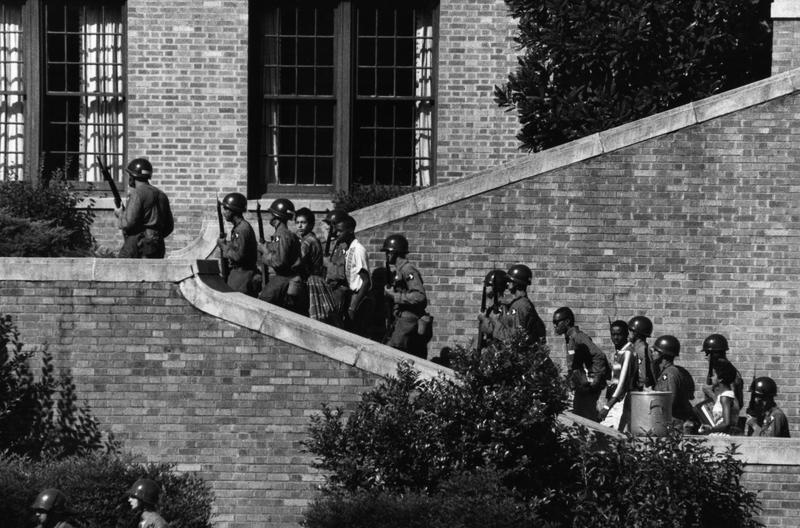 It was on September 3rd that Arkansas Governor Orval Faubus enlisted the National Guard to prevent the nine Black students from entering the school as armed white civilian mobs also stood by, threatening the children. Following a number of failed attempts at negotiation with Faubus, U.S. President Dwight D. Eisenhower would ultimately seize control of Arkansas’ National Guard through Executive Order 10730 which subsequently ordered the Guard to oversee, rather than prevent, the integration and protect the nine Black students. In addition, Eisenhower deployed federal troops to the scene by air at the urgent request of Little Rock Mayor Woodrow Wilson Mann. On September 25, 1957, the nine students—by then known as the Little Rock Nine—would successfully enter the school building. Supported by their mentor Daisy Bates, the Little Rock Nine would complete the academic year at the school despite being subjected to constant racist violence and bullying.

The history of the desegregation of Central High School is replete with lessons for our times and an exemplary case study for young people exploring themes of civic agency as they learn American history. Facing History’s multimedia curriculum Choices in Little Rock focuses on efforts to desegregate Central High School with an emphasis on the decisions people—including young people—make as citizens in a democracy. The unit is designed to promote students’ historical understanding, critical thinking, social-emotional learning, and civic agency.

Video Content
This collection also includes a rich array of videos featuring various witnesses to this history as well as contemporary events that help students connect their own lives in the present to the past.

A key example is this video with Little Rock Nine member Terrence Roberts in which he addresses the importance of understanding the history of segregation and civil rights to combat racism and discrimination today.

Educators, let us know how you explore this history in your classrooms in the comments!

Facing History and Ourselves invites educators to use our featured collection "Teaching Choices in Little Rock" to address this important history in the classroom.