Students Memorialize a Past Tragedy to Create a More Hopeful Future

How is a little known lynching case from 1917 relevant today?

For students at Overton High School in Memphis, Tennessee, discovering the case of Ell Persons became a call to action. Angered by the brutality of his murder and the high number of lynchings that took place in their own backyard, they decided to channel their energy into something positive. They have been hard at work to create a memorial for Persons and to bring light to an often forgotten part of U.S. history so that others, too, will learn from the past.

They first learned about him when Zoey Parker, a junior, discovered his case while doing a research assignment for Dr. Marilyn Taylor’s yearlong Facing History elective course. Persons was an African American woodcutter who was burned alive after being accused of murder. An estimated 5,000 people from the community came to watch. When Dr. Taylor informed her students the lynching occurred near the present day drive-in movie theater that was close by, “They were stunned,” she said.

“They have all been to this drive-in. They had a multitude of questions the following day so we put our scheduled lesson aside and they began their investigation.”

The students felt the need to do more so Dr. Taylor asked them, “What are we going to do about it?”

What they did was rally together, turning research into action, and formed the nonprofit, Students Uniting Memphis. Their goal is to create a memorial garden at the site of Ell Persons' lynching, which is now an abandoned bridge abutment surrounded by river overflow and dense foliage. 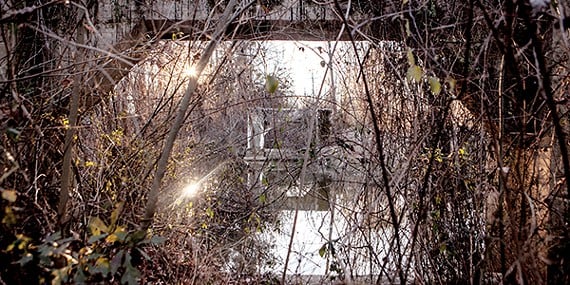 Image by Andrea Morales, from "Memphis Burning," an article by Martha Park about Ell Persons' lynching and local efforts to memorialize victims of lynching. Published in the Memphis Flyer. (Andrea Morales /All rights reserved.)

A simple research assignment has blossomed into a full-fledged community effort to reconcile with Memphis’ past. Overton students will meet with their peers at Central High School for the first time next week at the Facing History office to discuss how they might work together to make the memorial garden a reality. And it’s showing students the importance of being an upstander.

"Young people today have to take action in order for history not to repeat itself,” said Zoey Parker, the student who first researched Persons' case for Dr. Taylor's class. “We have to be mindful enough to understand we cannot continue to make the same mistakes as those before us.”

For Central High School teachers like Mary McInstosh, it’s a way to help her students confront the past and find meaningful ways to engage in dialogue about difficult topics like race. She was shocked to learn that Central High School students were let out of school early to attend the lynching 99 years ago.

"To find something real that's happening in the moment, and to be able to take leadership in organizing within the school and connecting with other students and community members will be very powerful,” she said.

Overton’s students also garnered support from The Lynching Sites Project of Memphis. Spearheaded by a local interfaith group of ministers, historians, and activists, the project formed after two of its members, Sharon Pavelda and Tom Carlson, heard Bryan Stevenson of the Equal Justice Initiative speak at a Facing History benefit in November 2015. As a defense attorney fighting for fairer sentencing and justice for the wrongly incarcerated, Stevenson makes the link between our history, including the narrative of African Americans as racially inferior, and the inequities we still struggle with today. He champions the idea that we can find a path toward healing and reconciliation once we face our past. The Lynching Sites Project aims to do just this and is committed to helping empower Students Uniting Memphis. 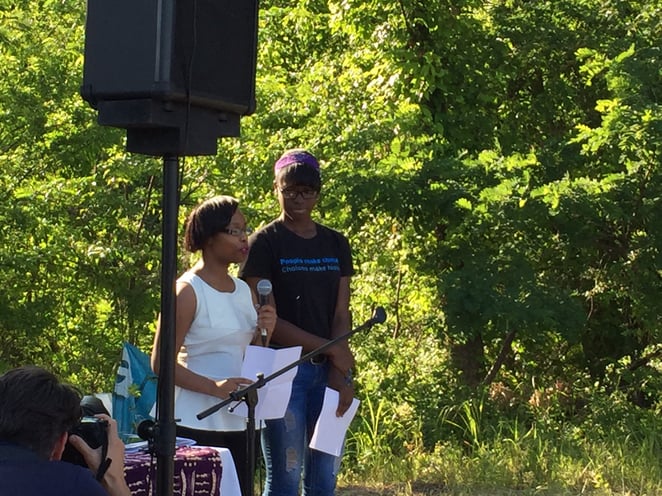 Students tell the story of Ell Persons at an interfaith prayer service in Memphis.

On Sunday, the 99th anniversary of Persons' death, nearly 100 people gathered at the site of Ell Person's lynching for an interfaith prayer service. Students Uniting Memphis hopes to draw 5,000 people to next year's memorial service to mark the 100th anniversary.

Although Ell Persons’ murder represents a divisive and violent part of U.S. history, the students at Overton High School have given it a more hopeful and inspiring legacy. They are personifying what it means to face history so they can build a better future.

How have your students taken action to face the past? Share your stories of students mobilizing into action with us.

Want resources that can help you facilitate productive and meaningful conversations about race, membership, and difficult moments in U.S. history? Check out some of these recommendations: