Women's Suffrage at 100: The Key Role of Black Sororities 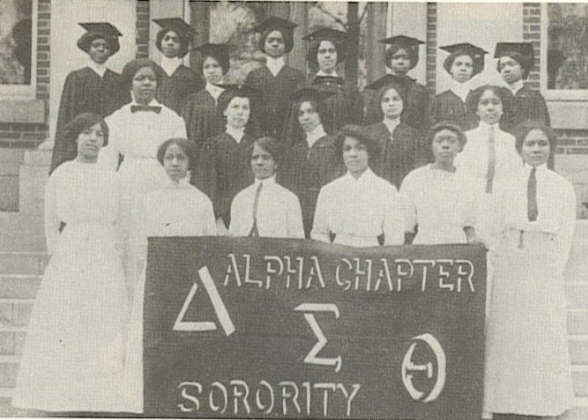 Tuesday, August 18, 2020 marks the 100th anniversary of the ratification of the 19th Amendment to the U.S. Constitution. This amendment established women's suffrage for the first time, granting white women across the country the right to vote to the exclusion of non-white women. Yet the women's suffrage movement contained many more key players than this outcome suggests. Among them were African American luminaries like Mary Church Terrell and the scores of Black women who joined with her to demand equal rights.

In this interview, I had an opportunity to speak with Dr. Tara White, public historian and Professor of History at Wallace Community College in Selma, Alabama about the lesser-known role of Black sororities in the women’s suffrage movement in the United States. Here we discuss the origins and significance of Black sororities, as well as the continuing relevance of their struggles in the contemporary U.S.

EH: What are the origins of Black sororities and fraternities, and what was their historical significance?

TW: In the early Reconstruction period, African Americans were elected to office, and so you had these wonderful ‘black and tan’ Republican coalitions governing the South. But by the end of Reconstruction, all of those coalitions had been overthrown, many by violence. What you saw by 1890 was an attempt to completely remove African Americans from political power, and the introduction of tactics like poll taxes, literacy tests, and grandfather clauses to stop African Americans from voting. In Ithaca, New York where Cornell University is located, although you didn't have these same laws, there was segregation by custom. What you found during this period was an unwillingness to rent to African Americans or to allow them to live in certain areas, including college dormitories. In addition, white students began forming exclusive sororities and fraternities. So the guys who formed Alpha Phi Alpha—the very first Black fraternity—were trying to band together in a hostile place since they really couldn’t find housing on campus and were socially excluded. Soon after, Black sororities began to form focused on developing a common bond of sisterhood, commitment to public service, and commitment to racial uplift.

EH: How do Black sororities fit into the story of women’s suffrage?

TW: As the National Association of Colored Women's Clubs was forming in the summer of 1896, Plessy v. Ferguson was being argued in the Supreme Court. So the clubwomen were discussing what their agenda would be and looking out over what was happening on the national stage. African American women recognized that suffrage was something that they wanted for themselves because even though they felt that African American men could represent them, they didn’t always represent the interests of women and children. And Black women felt that they were capable of representing their own interests. During that founding meeting, they passed resolutions on many issues of the day that affected African Americans. The 15th Amendment was the Black man's hour, as Frederick Douglass said it. And so they wanted to make sure that this next movement would be theirs and solely theirs. And it would not be long until the NACW launched a suffrage committee and issued a statement on women's suffrage.

There were white women's clubs and white women working for suffrage. But what we see is that, in the history of the South, those white women were always going to align themselves with white men because they felt that this was the best way to get their needs met. In contrast, suffrage and racial uplift became areas of focus in Black sororities by 1912, especially for the new Delta Sigma Theta sorority at Howard University. They go to the Women’s March in 1913 with Mary Church Terrell, along with figures like Ida B. Wells Barnett and some of her women from the Alpha Suffrage Club out of Chicago. A couple of decades later in the late 1930s, Alpha Kappa Alpha (AKA) Sorority formed the Non-Partisan Council to lobby for civil rights and then replaced it with the American Council on Human Rights in the 1940s. They, too, were on the front lines of women working for suffrage. During the Civil Rights Movement, both Deltas and AKAs worked with the southern Black Freedom Movement to push for voting rights. Also, I don’t want to leave out members of Zeta Phi Beta and Sigma Gamma Rho Sororities who were also very active.

EH: How should we understand the work of these Black suffragettes in the context of the conditions faced by most Black women at the time?

TW: What we see is that the Mary Church Terrells, Ida B Wells', and Margaret Murray Washingtons were very fortunate to be able to go to college and actually have “good” jobs. Ida B. Wells was a teacher before she started working in newspapers, and so she didn't have to do what the majority of Black women were doing. The majority of Black women after slavery found themselves doing one of a couple of things: they were washing women, domestics, or working in the fields as timekeepers and in other roles like Fannie Lou Hamer definitely did.

Historians Tera Hunter and Jacqueline Jones expound on what Black women’s labor looked like during this time. What Black women were trying to do was feed their families, help their husbands provide for their families, and just survive. Most of them were also not afforded the educational opportunities that the clubwomen had. But the clubwomen knew that their political destiny was tied to their poorer Black sisters. Their racial status trumped their educational status and their class status, or as Evelyn Higginbotham puts it, race served as a ‘metalanguage,’ and their gender meant something completely different because of the impact of race. So these clubwomen are what they would have called “race women,” working for the benefit of all African Americans.

EH: Why is it vital for all Americans to understand these aspects of Southern history?

TW: The things that impacted the people in Birmingham, in Montgomery, in Tuskegee, and Selma impacted all Black people nationwide. The majority of Black people in America lived in the South and so the situations that happened in the South were affecting the majority of Black people. That goes back to Reconstruction and the Gilded Age when black communities were formed and people faced violence from white southerners. But women were on the frontlines and contesting the notion of citizenship. Black women were working to make sure that they had access to all of the things that ordinary citizens should have, that their rights were respected, that they got justice, and were able to take care of their families without the fear of violence. Black Southerners wanted to enjoy the full privileges and rights, including suffrage, equality before the law, and equal protection under the law, that came with citizenship.

Many years after the Civil Rights Movement, these threats continue. We're still dealing with police violence. We're still pushing back against disenfranchisement in the form of racial gerrymandering, voter ID laws, misinformation and disinformation, and so many other things. I’d planned to have both Delta Sigma Theta and AKA coming out to my campus in the coming weeks to register people to vote. And so African American women are still in the forefront fighting for our communities. And so this illustrates a quote that I love to use from Ella Baker: "We who believe in freedom cannot rest."

EH: What other stories do you believe need more voice as we honor Black women’s and other women’s histories?

TW: I think it's very obvious to historians that we don't really have a Civil Rights Movement without women. But for the general public, the entire movement was Martin Luther King, Jr. And I’m not saying that Dr. King was unimportant—as the young people say, "I'm not throwing any shade.” But I will say that the backbone of all of these movements were women, so we need to hear the hidden stories about their activism. The right to vote and to participate in the body politic are ideas that many women fought for during the southern Black Freedom Movement of the 1950s and 1960s. Black women were there, leading and following.

I'm so grateful for Jeanne Theoharis and her work on Rosa Parks in which she’s brought out her more than 20 years of activism that happened before she even decided that she was not going to move from the colored section of the bus...though she actually sat in the right section and they moved the sign. It’s important that we see the nuances of these movements and these women's participation in all of them.

IMAGE: The twenty-two founders of the Delta Sigma Theta Sorority in 1913.
Note: This interview was originally published in April 2020 and was previously titled "Suffrage and Sisterhood: The Origins and Impact of Black Sororities."

Dr. Erika Henderson is Associate Program Director, Regional Growth at Facing History and Ourselves in Memphis.
At Facing History and Ourselves, we value conversation—in classrooms, in our professional development for educators, and online. When you comment on Facing Today, you're engaging with our worldwide community of learners, so please take care that your contributions are constructive, civil, and advance the conversation.