Home > Our Blogs > Facing Today > Teaching About Anti-Asian Violence: Start with Yourself and Your Community

Teaching About Anti-Asian Violence: Start with Yourself and Your Community

Posted by Facing History and Ourselves on May 27, 2022 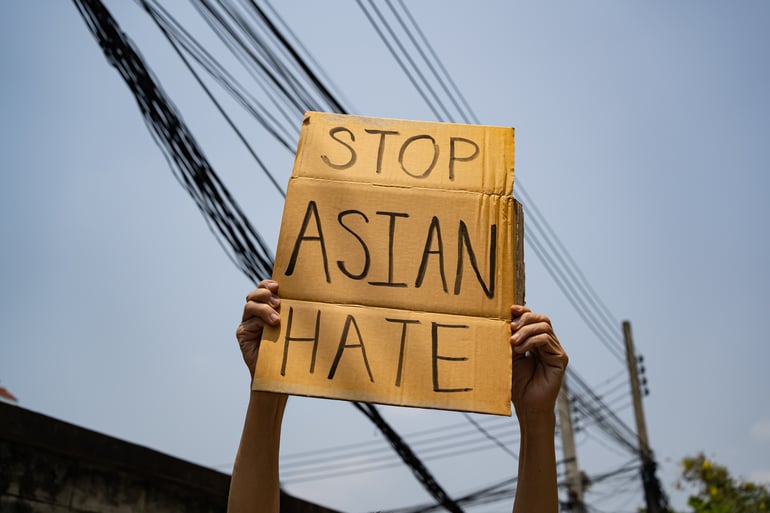 Violence and harassment targeting Asian American and Pacific Islander (AAPI) people has become increasingly visible across the United States, Canada, and the UK over the last few years. After a painful series of attacks and violence across the country, we learned this month of a church shooting targeting a community of Taiwanese Americans that is now being investigated as a hate crime. But the recent attacks are only the latest episodes in a long and complex history of oppression, marginalization, and violence targeting AAPI people. Most school curriculum fails to adequately address AAPI histories and identities, which contributes to a widespread lack of acknowledgment or understanding of the root causes of anti-AAPI hate today and can make it challenging for teachers to address anti-AAPI hate.

In April 2021, we interviewed nine educators who work in five different schools in the San Francisco Bay Area, Chicago, New York City, and Toronto about the conversations they have had with their students about recent incidents of anti-AAPI violence and how they incorporate AAPI histories into their curriculum. The educators we spoke to expressed how crucial it is to address these topics in school. Eunhae Ha, who teaches English at KIPP King Collegiate High School in San Lorenzo, California, told me, “every hour, every day that it’s not being addressed, we think AAPI students specifically, they feel that and it’s hard.”

In the United States, Asian American and Pacific Islander (AAPI) Heritage Month is drawing to a close, but it is vital that teachers continue to learn, plan, and teach AAPI histories throughout the year. This blog post shares some ideas for steps you can take to prepare for teaching about anti-AAPI violence or AAPI histories:

Educators often feel uncomfortable opening a conversation on anti-API violence with their students or colleagues. According to Mark Segado, who teaches at KIPP King Collegiate High School and identifies as Filipino-American: “Across all backgrounds, and all communities and identities, topics of oppression and violence -- particularly physical violence -- are difficult to talk about, but I think there’s a level of fluency that’s more difficult to access when we’re talking about the AAPI communities. I think that there is a lack of practice, and I think there’s a lack of framing the experience of AAPI people as in terms of marginalization.”

Melissa Jane Pascual, who also teaches at KIPP King and identifies as Filipino-American, discussed the discomfort some AAPI people feel about opening a conversation on anti-AAPI hate: “part of it for me... is the idea that AAPI people are generally told when they're growing up: Keep your head down. You don’t need to say anything. Just brush it off and leave it alone. Working through that also is something that needs to be done, which is why a lot of times, people don’t speak up about these things. But if there’s one thing that folks need to remember is, even though it’s hard, or you don’t know where to start, or you’re uncomfortable, it has to be done. I don’t want to say there’s no wrong way to do it, but trying something is better than trying nothing.”

Melissa Jane went on to share: “The reason we’re all here as teachers in this space is always for the students and just keeping at the forefront when we don’t have this conversation, that says something in itself, right? So even if it’s not perfect, even if you’re not sure how to start, starting anywhere is better than never doing anything.”

Doing difficult work is much easier if you have allies, so it is important to find colleagues or members of your wider community who can support you in teaching about anti-Asian hate incidents or pushing for broader change about how AAPI histories and identities are addressed in your school.

If you do not identify as AAPI, you can also reach out to colleagues who do, so that they do not have to carry the burden of responding to these incidents on their own. Eunhae Ha, who identifies as Korean-American, co-developed a curriculum responding to anti-AAPI hate incidents with several other AAPI colleagues at their school. They said, “AAPI teachers had several meetings to work on this, maybe four to five, and it’s not just the time and energy that takes, but the emotional labor.”

Mark Segado, who worked on the curriculum with Eunhae, shared this advice to other educators: “people who want to create change within their school, I think it is important that they find allies on staff.” Coalitions should ideally involve staff of different backgrounds, “because best case scenario, you don’t have to do the work while you’re processing, because your allies are doing it for you, right? They’re showing up for you.” He went on to say: “I think there’s a whole lot of things that I’m not aware of that are happening in other communities. If I was properly being an ally, I would be checking in with people and understanding what’s on other people’s minds, or helping them carry the burden, so that when it becomes time to educate everyone else, or when it becomes necessary to be supportive, I can be more active as opposed to expecting them to advocate for themselves.”

Eric Reed, who teaches middle school history in Chicago, believes teachers that have yet to dive deep into Asian American histories should still open conversations about anti-AAPI violence with their students, but “at some point, you do need to do some research on your own of these communities, and not to assume we know the needs of any of these communities. We need to hear and listen.”

Deepening your learning is important because many teachers did not learn about AAPI histories or identities while they were in school. Ben Gross, who teaches high school history in Toronto told me: “I’m almost 40, and the vast majority of stuff that I teach in my Canadian history course, I was never taught in school. So I think there are massive learning gaps for educators that are really hard to fill when you’re trying to teach full-time.”

He continued: “I think that a lot of educators are used to being experts, and so it’s harder for many educators to sit back and learn because it’s not always seen as an expectation for them. I think that’s changing in the culture of teaching a little bit. The idea of being a lifelong learner is maybe becoming a little bit less lip service and more practical.” He advocates always keeping an eye out for histories that are under-represented in standard curriculum and textbooks. When you identify gaps, the best way to fill them, in his opinion, is to read as many pieces as you can that center voices from the communities you are learning about.

Facing History invites educators to use our resource list, Combating the Erasure of API Experiences and Anti-API Violence.

This post was originally published in May 2021 and has been updated.