Home > Our Blogs > Facing Today > "This is Where Our People Are": Reflections on Plymouth 400

"This is Where Our People Are": Reflections on Plymouth 400 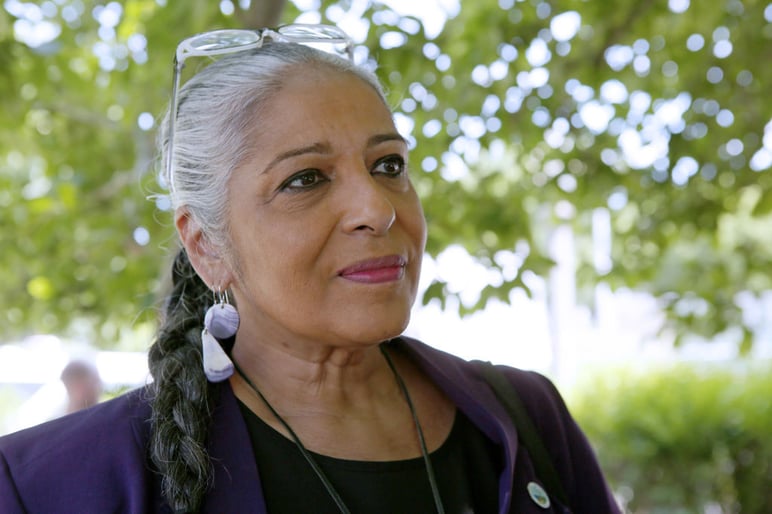 This month, in addition to being National Native American Heritage Month, marks 400 years since the Mayflower landed in Plymouth. Here in Massachusetts—a state named after the indigenous people of the “Great Blue Hill”—many of us are settlers on stolen land. I spoke with Cheryl Andrews-Maltais, Chairwoman of the Wampanoag Tribe of Gay Head Aquinnah based on Martha’s Vineyard, to hear her perspective on this moment, and what we can learn from reflecting on the anniversary.

CF: This year marks 400 years since European settlers landed in Plymouth. How are your communities reflecting on and/or acting around this moment?

CAM: We wanted to really have our truth be told, not the whitewashed, watered down version [from] the history books that our children have to endure around fifth grade. Not the version to make the story sound good. As we say in Indian Country which is where we live and work: the truth is the truth is the truth.

It’s not something that we celebrate as a community or as a people. The landing of the Europeans in Plymouth eroded our sovereignty and took away our right to be indigenous Indian peoples [with] laws on the books literally prohibiting us from living, dressing, speaking and practicing our traditional cultural beliefs.

You can’t get past the truth until it’s acknowledged, until people understand the atrocities that were perpetrated against us. All those attempts at genocide. For us to still be here is miraculous and that part of the story is why, from our perspective, we celebrate. Ours is a celebration of our resiliency and our ability to still be here in our ancient homelands. Our traditional ways have not been lost.

There is such a mixed bag of emotions for us. But we are woven into the tapestry that is this country—the contributions that our community and all Native communities have [made] since the founding of this country and moving forward. So we want to make sure that we’re still at the table, that our story is told.

CF: In dominant culture, there is an insidious tendency to consider “encounters” with indigenous peoples as a past tense. At the same time, there is a growing movement in the US to acknowledge native land and settler colonialism. Can you speak to the current, ongoing encounters that your communities are facing?

CAM: [When the Mayflower landed], we basically had a few choices. We could attack, we could do nothing, or we could assist. Our traditional, cultural beliefs and teachings are that it is our responsibility to help all other living creatures, animate and inanimate. We did not own the land as colonialism defines it. All the lands were shared in common with each other. We used what we needed, left the rest for each other. So of course choosing the third […] we helped them and they were able to survive, then thrive.

From then to 1870, as a precursor of the Dawes Act, [we were] divested of our shared common lands. [We were prohibited] from even being able to live on our own lands [and were] outlawed from going into any of the organized settlements unless we were escorted by an English person. We just finally got that law stricken from the books in around 2004. In April of 1987 we got our federal recognition, and then Congress passed the Massachusetts Indian Land Claims Settlement Act which authorized federal funding for us to buy our own land back.

There still is the mentality that colonialism reigns supreme. There is a whole sense of superiority over the Tribe and Tribal Members, and a lack of understanding our sovereignty and respect for the tribal government. Then, there is a struggle, not only from contact but all the way through, from diminishing our sovereignty to regaining it back through the process of the federal acknowledgment. Tribes are perceived as [though] we no longer exist, like we are in the “past tense” Indians or just the descendants of. But we are still here.

CF: In many education circles, people are talking about “decolonizing” curricula and practices. What does a decolonized education system mean to you? What lessons can non-tribal schools learn from your practices in order to work towards decolonization?

CAM: What [educators] should be doing is having conversations and ongoing relationships with the local tribe(s) who are able to work out the specific history of that locale. I as Aquinnah Wampanoag cannot speak to [the perspectives of the] Yuma. Those in the Nashoba Valley should be talking to the Nipmuc people. It’s a matter of education. And, it’s a matter of patience with that education and facing what came over, what was able to take root, manifest itself and dictate how everybody perceives tribes and Indians today.

We’re hopeful that, at some point, we’ll be able to teach our own classes, our traditions, our culture—who we are—on a more consistent basis to give our young people that sense of purpose and that sense of place and that sense of pride. There’s more to language than just speaking, because in our language it’s so descriptive. It’s all familial based so I’m not just who I am, it’s not just me. I introduce myself with my name but I’m my mother’s daughter, my grandmother’s granddaughter and so on. And we’re trying to get our people back into that. We’ll do it internally for our own People, and then allow [us] to be the teachers to others.

CF: At Facing History and Ourselves, we speak about upstanding—individual and collective action against hate and bigotry. What do you see as actions, both at an individual and systems level, that people can use to create a world that is just and sustainable?

CAM: I think looking forward it’s opening up people’s minds to realize that there’s not a whole lot of truth in any one country’s founding because everybody comes from someplace. When people have had the privilege of going to their homelands, finding where their own roots emanate, it really changes their perspectives. They have that sense of belonging because their ancestors are buried in the earth that they were at. And now it’s opened their perspectives on what we deal with and how we feel because we never left. This is where our ancestors are. And this is where our people are.

I’m optimistic that things are changing. This generation that is coming up behind us, they will check you when you start going down that road and not looking at people as human beings first… To ensure that continues is to not only educate our own, [but for] everybody to have the right to take pride in their own culture and their own history and heritage, and have that celebrated for what it is. And I think that the promise of the next generation is what gets us through these days.