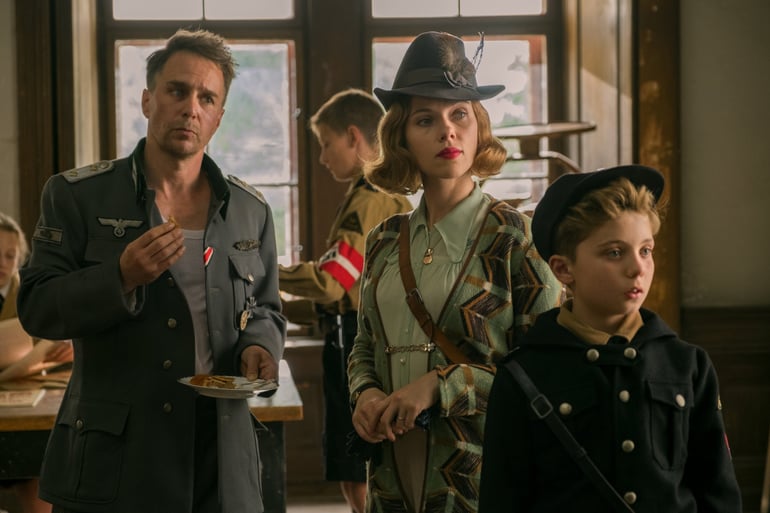 Taika Waititi’s new film, Jojo Rabbit, has polarized both critics and audiences—and for good reason. Dubbed an “anti-hate satire,” the film tells the story of Johannes “Jojo” Betzler—a ten-year old German boy striving to find social belonging and direction as he comes of age during World War II. In the absence of his father who has gone off to war, Jojo relies heavily on the guidance of an imaginary friend who takes the form of Adolf Hiter—portrayed here by director Waititi, a Maori man of Jewish descent. Deeply involved in the Hitler Youth, Jojo’s antisemitism, nationalism, and imaginary friendship are challenged when he forms a relationship with Elsa, a Jewish girl hiding in his attic. And though educators who teach adolescents about this time period might be curious about the film, their task is to disrupt the reductive narratives it reinforces about what drives hate—and deliver thoughtful, factual education on the Holocaust.

As the film opens, we see Jojo being inducted into the Jungvolk, or the Hitler Youth, a group the lonely boy has been eager to join for some time. There, Jojo is targeted by older members for his weakness and sensitivity, and takes refuge in the reassurance of his imaginary friend, Hitler. In this film, Waititi seems to be suggesting that the hateful ideologies that many people cling to gain currency due to feelings of social alienation, helplessness, and even a fragile sense of masculinity. And though this insight may contribute to our understanding of hate, it reduces complex social and political phenomena (including longstanding antisemitism, propaganda, and self-interest) to the psychological weakness, isolation, and vulnerability of individuals.

Though clearly intended to provoke laughter, Waititi’s absurdist presentation of Hitler and the Nazis undermines critical reflection about this history, as well as one’s own complicity in contemporary antisemitism. The film is littered with antisemitic jokes, characters saluting Hitler repeatedly and cartoonishly, and other jarring displays including characters contorting their bodies into the shape of swastikas as part of an unlikely exercise routine. In the face of such painfully irreverent pyrotechnics—and a concomitant lack of emotional sincerity or earnest historical explanation—one wonders what could possibly be the point other than to provoke self-righteous laughter that says: “Can you believe how idiotic those Nazis were? That surely ain’t me!” But this is precisely the type of thinking that must be disrupted.

In a world where more subtle expressions of hate remain pervasive and unacknowledged, Waititi’s cartoonish display may merely divert attention away from the forms of hate that really do suffuse our nations and communities.

Even in the film’s final act where Jojo finally confronts Hitler, he doesn’t seem to have registered the impact of his deeds on Jewish people like Elsa—regarding her only as an object of fascination who happens to have exposed his ignorance, rather than a complex individual in her own right. Perhaps this was a deliberate choice on the part of the filmmaker—to convey that even when individuals challenge dimensions of their hateful beliefs, a single moment of refusal is insufficient to root out long-held ideologies. Or that those who purport to be against hate can do so despite a startling lack of empathy and self-awareness. But Waititi does not perform the critical legwork necessary to convey a strong message, and concludes the film with yet another silly scene that raises more questions than it answers.

Though the film has drawn accolades from some Jewish critics including Liel Liebovitz of Tablet Magazine, we must consider the likelihood that viewers will not get the joke that Waititi has attempted to make—particularly in this climate of rising hatred and deepening ignorance. Research shows that 66% of American millennials know nothing of Auschwitz concentration camp and that 22% of them have not even heard of the Holocaust. Amid this dearth of knowledge and the explosion of media that masquerades as historical information, educators equipped to deliver key lessons of history are more vital than ever before. We must help our young people cultivate media literacy and resist the temptation to check their critical capacities at the door.

Facing History and Ourselves uses lessons of history to challenge teachers and their students to stand up to bigotry and hate. And our work goes beyond simple denouncements of hateful rhetoric to engage the young person emotionally, build empathy, and cultivate self-awareness—all of which are necessary to confront hate in our communities. We invite educators to use our seminal case study, Holocaust and Human Behavior, in the classroom.