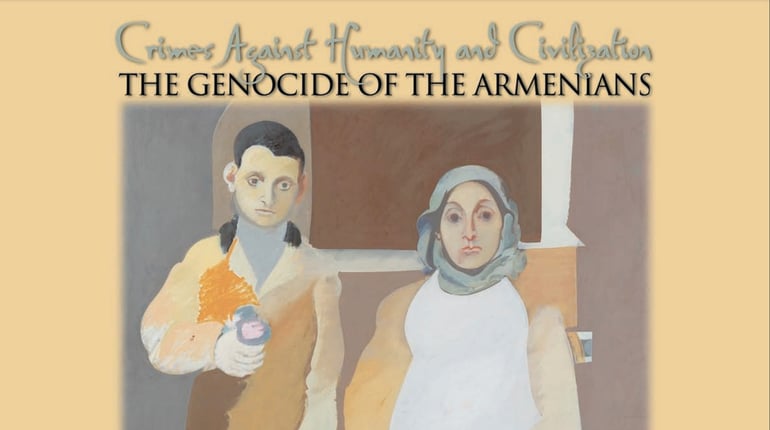 This piece was originally released in April 2021 prior to President Biden's formal recognition of the Armenian Genocide. What follows is a reflection written by Facing History Sr. Director of Marketing & Analytics Jen Langley on her personal connection to this critically important historical chapter.

While I knew that Facing History had written about the Armenian Genocide, being greeted by the eyes of Gorky and his mother was a surprise and a reminder. It was a surprise to see someone whose life events are inextricably tied to those of my own grandmother’s family. They were also Armenians who had to flee their homeland in the Ottoman Empire. They ended up in Watertown, Massachusetts, and, in fact, lived on the same street as Gorky for a time. My great-grandfather and Gorky both worked with countless other Armenian immigrants at the Hood Rubber Company, making 3,000 shoes a day to send all over the United States.

Seeing the book cover was also a reminder about survival and recognition. My great-uncle also came from Van and in 1915 saw his entire family murdered. I grew up with him and his stories. I knew that he had to sleep next to a wall—a way to keep him in his bed as he relived the events of 1915 in his dreams, even as an 85-year-old man.

We did not talk about recognition when I was growing up. Instead, I just experienced the culture that survived—I ate the food, sang the songs, and heard the stories of the “old country.” As a child, I did not understand yet that the sharing of survivor’s stories in my family was heavy with the need for acknowledgment.

Crimes Against Humanity and Civilization contains this quotation from psychologist Ervin Staub:

"The intense need of the Armenians as individuals and as a community to have the genocide be acknowledged and known by the world teaches us something about ourselves as human beings.

First, our identities are rooted not only in our group, but in the history of our group. For a complete identity, we must be integrated not only with our individual past, but also with our groups’ past. Perhaps, this becomes especially important when our group is partly destroyed and dispersed; our families and ourselves have been deeply affected; and in a physical sense we have at best fragments of our group.

Second, we have a profound need for our pain and suffering, especially when it is born of injustice, to be acknowledged, known and respected."

The recognition I felt when I saw Gorky’s painting cannot be overstated. Every Armenian in America has experienced meeting someone who doesn’t even know that Armenia is actually a country, never mind that an unrecognized genocide was committed against their people in 1915. Along with those who are simply unaware, there is the denial that continues to this day.  For all of the beauty and richness of my Armenian culture that survived, I’ve come to learn that it’s profoundly difficult to heal as a people and as individuals in the absence of recognition.

In 1996, eminent genocide scholar Gregory Stanton defined the eight states of genocide. And though “extermination” is one of the stages in his framework, it is not the final stage as one might expect. On the contrary, the final stage in Stanton’s framework is denial. This illustrates so well that without recognition of the incalculable violence and losses faced by Armenians, the physical process of extermination begun in 1915 continues in nonphysical forms.

Being told again and again that our losses have not been profound and that the violence done to us is not worthy of the label “genocide” denies our humanity as a people and pushes our chance for collective healing onto an ever-receding horizon.

My uncle is no longer with us, nor is Arshile Gorky, but we remember--especially on April 24. However, our remembering is always complicated. This month, Azerbaijan has built a “park of trophies” and their President was photographed amidst the helmets of murdered Armenian soldiers from the war in Nagorno-Karabakh in 2020, which was backed staunchly by their ally Turkey. How do we process what has just happened without true acknowledgment of the past?

However, the announcement that President Biden may formally recognize the Genocide this month, comes as an important potential milestone in a century-long struggle. As then-Presidential candidate Biden said last year on April 24th:

“It is particularly important to speak these words and commemorate this history at a moment when we are reminded daily of the power of truth, and of our shared responsibility to stand against hate — because silence is complicity,” he said.

“If we do not fully acknowledge, commemorate, and teach our children about genocide, the words ‘never again’ lose their meaning,” he said.

Indeed, how can we really ever say “never again”?

Facing History and Ourselves invites educators to use our case study, Crimes Against Humanity and Civilization: The Genocide Against the Armenians, in the classroom.

Pictured above: A portion of the cover of Crimes Against Humanity and Civilization: The Genocide of the Armenians (Facing History and Ourselves, 2004).

Jen Langley is Sr. Director of Marketing at Facing History and Ourselves.
At Facing History and Ourselves, we value conversation—in classrooms, in our professional development for educators, and online. When you comment on Facing Today, you're engaging with our worldwide community of learners, so please take care that your contributions are constructive, civil, and advance the conversation.