Home > Our Blogs > Facing Today > Why I Marched for Civil Rights at 15 with Martin Luther King, Jr.

Why I Marched for Civil Rights at 15 with Martin Luther King, Jr. 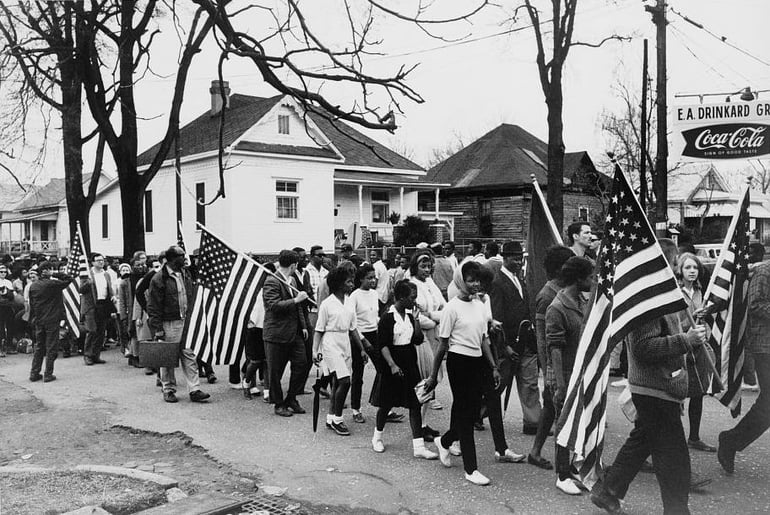 Lynda Blackmon Lowery was the youngest person to participate in the historic three-day march from Selma to Montgomery, led by Dr. Martin Luther King, Jr. in March of 1965: she turned 15 on the second day of that march. To reflect on Dr. King's legacy, we sat down for a conversation with Blackmon Lowery. She recalls what it was like to participate in a pivotal moment of the Civil Rights Movement as a teenager and shares how young people today can make a difference in the face of the continuing struggle for social justice.

Please note this piece includes some offensive language. We have chosen to include it as it reflects the historical time period when these events took place and represents Blackmon Lowery’s experiences.

When did you realize you were considered “the other”?

When I was nine years old, my father was taking me downtown to get a pair of shoes. My father was this big jolly black giant. We went into the store and a white child about my age said, “What do you want, nigger?” I saw my father go from this tall man with his shoulders squared with his hat on his head to this man with his head down, shoulders slumped, and hat in hand. That was my first real experience with that word.

What made you join the Civil Rights Movement at such a young age?

My momma died in childbirth when I was seven because she needed blood. There was a white hospital in Selma but because of the color of her skin she couldn’t get the blood she needed from there. Instead it was sent from Birmingham by bus but it was 15 minutes too late. I knew white people hated black people and treated them badly. But I didn’t know they hated us so bad they would let my mother die. I made a vow that when I got big I was going to change that. I didn’t know that my time would come when I was 13 and heard Dr. King speak for the first time in 1963 at the Tabernacle Baptist Church.

What did Dr. King say that motivated you so much?

He said you can get anybody to do anything with steady, loving confrontation. That passed by me when I heard him say it the first time. But the second time I remember jumping up saying, “Oh yeah, that’s how I can do it!” And my grandmother pulled me down saying, “You better sit down, girl, and be quiet!” Dr. King gave me the means by which I could make change. And we could do it nonviolently. It took Dr. King to tell me I could truly do it.

What happened to you on March 7, 1965, the first day of the march, also known today as Bloody Sunday?

We were told we were an illegal assembly and we wouldn’t be able to walk to Montgomery. My team leader said to kneel. While on my knees, I heard this sound: “pop, pop, pop, pop!” There was smoke coming from the ground and you couldn’t breathe. You couldn’t see. It burned your eyes. Then I felt someone jerk me with their hand on my collar. They were pulling me back and I was resisting. One hand was up by my mouth and I bit him. Then I heard the word "nigger" twice. I got hit twice over my forehead. Then he pushed me forward and I was able to roll over, get up, and run. I couldn’t really see because I was running into a cloud of tear gas. This person was running behind me hitting me. I apparently passed out because when I woke up I was on a stretcher and they were trying to put me in the back of a hearse. I told them I wasn’t dead and I wasn’t getting in there ahead of my time. I received seven stitches over my right eye and 28 stitches in the back of my head.

What motivated you to show up again for the second attempt to march from Selma to Montgomery on March 9, 1965, after experiencing such violence?

I wanted Governor George Wallace to see what he had done to a 14 year old who was a threat to nobody. I wanted him to know that I was going to be his worst nightmare: I was going to be an educated black woman. It seemed to me white people were afraid of black people who were educated and spoke well, so I was going to be one of those people.

But I walked out that morning and my eyes focused on three guardsmen standing by their jeep with their guns and bayonets. I thought they were there to finish the job they had started the day before. I ran back in the tent screaming, “Don’t let them kill me!” I was so scared I didn’t care if anyone ever voted or if anyone ever got their freedom. The march started an hour late that day because they was trying to comfort me. But I could hear my grandmother’s voice talk about determination and finishing what you started.

What was it like when you successfully marched through to Montgomery on March 25, 1965?

We started out with 300 people on the original roster that were allowed to march the entire way from Selma to Montgomery. But on that final day, thousands of people joined us. The more people that jumped in, the further back in the crowd me, my father, and my three siblings were. It was a long day and there were lots of people giving speeches but we had a good time doing something that would possibly change the world.

I would do it all over again. But If anyone had told me 52 years later I’d still be fighting for voter rights and justice for all, I wouldn’t have believed them. It’s a shame that 52 years later we have to fight for people's rights all over again with today’s political climate.

How can teenagers today see they can make an impact?

I often tell young people that if you see something you think is wrong and it bothers you, then with steady, loving confrontation, you can get others to see the wrong in whatever it is that you see. Someone will hear you and join you. There are other people who feel the way you’re feeling but they may not be able to express it the way you do. If I could follow a vow from 7 years old to 15 years old, I believe you can follow yours if you’re determined to do it.

Explore the Civil Rights Movement with your students with our unit, "Eyes on the Prize: America's Civil Rights Movement: 1954-1985." With four distinct lessons, your classroom can gain a better understanding of the nonviolent tactics used by Dr. King and consider how they can make change in their own communities.

Photo Caption and Credit: Participants, some carrying American flags, marching in the civil rights march from Selma to Montgomery, Alabama in 1965. By Peter Pettus (Library of Congress) [Public domain], via Wikimedia Commons