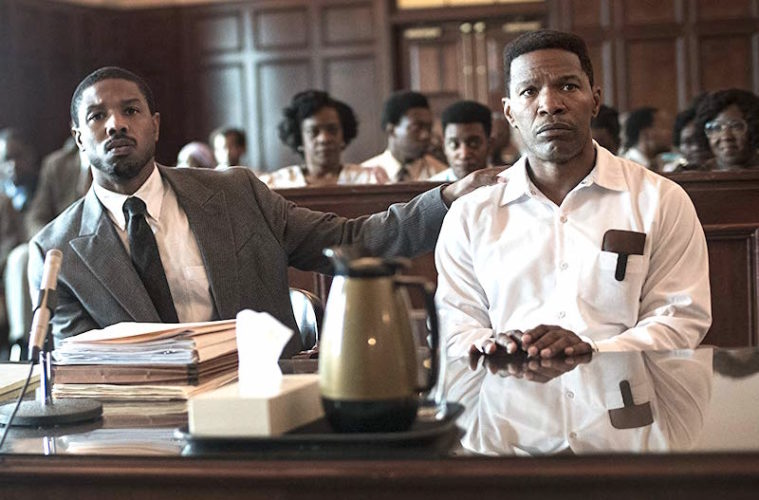 After graduating from Harvard Law School, Bryan Stevenson moves to Alabama on a mission to provide free legal services to people trapped within the criminal justice system. He recognizes an urgent need to correct the injustice inherent in the mass incarceration of people of color who, historically, have been illegally and unfairly sentenced due to inadequate legal assistance, racial bias, and prosecutorial indifference to innocence. To accomplish this, Stevenson, whose spirit of quiet determination is masterfully portrayed on screen by Michael B. Jordan, establishes the Equal Justice Initiative (EJI) along with his colleague Eva Ansley, who is played by Brie Larson.

It is during this early period in Stevenson’s career that he meets McMillian, who has been wrongfully convicted of murdering a white teenager and sentenced to death. Finding glaring gaps and inconsistencies in the testimony and evidence that condemned McMillian to death, Stevenson embarks on a battle against Alabama’s judicial system, one steeped in the legacies of slavery and Jim Crow, and the history—and present day reality—of racist ideologies. From start to finish, the film ripples with an intense, though often quiet, emotional current evoked by a compassionate confrontation with the U.S. criminal justice system.

While the film sets up Stevenson and Ansley as battling a corrupt judicial system, once that framework is established, they begin to fade into the background. It is in this way that the film makes space for, and honors, its characters whose voices and very humanity have been too long stifled. These people are, of course, the death row inmates Stevenson seeks to defend. As McMillian’s story unfolds, viewers gain increasing levels of insight into the humanity of incarcerated individuals. This, in a larger sense, is the film’s real victory.

Through Jamie Foxx’s stunning, emotionally nuanced portrayal of McMillian, we witness his complexity and resilience, and the importance of the relationships that he has forged with his fellow inmates. Audiences see the friendships formed between the men on death row, how together they maintain hope, survive devastating defeats, and attempt to hold on to the world outside their cells. The everyday kindnesses and conversations shared between McMillian and his friends act in direct defiance to a system which seeks to isolate and dehumanize them. It is this unwavering commitment to humanity and dignity that propels the film forward, as well as Stevenson’s work in the real world.

In addition to showing the power of friendships within prison walls, the film also conveys the importance of family and community on the outside—McMillian’s own supporting force throughout the film. The audience is shown a loving black family and large, supportive community who all stand by McMillian’s innocence. When called upon, they show up in droves and offer testimony and alibis that confirm his innocence, despite putting their own lives in very real danger. In this way, the film seeks to celebrate and honor black lives amid a system designed to strip them of dignity, justice, and their very humanity. Walking this delicate line of celebration, while also acknowledging past and present injustices is a complex task, but one the film successfully accomplishes. This, too, is an essential part of Stevenson’s thesis: that only through learning, and confronting our history can we build a brighter future for all members of our society.

It is important to remember that this story isn’t ancient history, and that the disproportionate incarceration of people of color in the U.S. is a direct product of an unreconciled history of slavery. And while this film and Stevenson’s work are set in Alabama, a state with an undeniably brutal, racist history, it would be a mistake to reduce this to a strictly southern problem. We must not forget that systems of white supremacy exist in every corner of our country, and that they can take many different shapes—some less visible than others. This is not a story of one heroic lawyer in the American south, but of America itself. It is a story of the responsibility that we all owe each other if we seek to live in a truly United States, with liberty and justice for all.

To date, Stevenson and EJI have achieved reversals, relief, or release for over 135 wrongly condemned prisoners on death row and won relief for hundreds of others who were wrongly convicted or unfairly sentenced. Outside of the courts, EJI’s immersive educational offerings are setting into motion a truth and reconciliation process so desperately needed in our country. You can learn more about the Equal Justice Initiative and its scope of work at EJI.org.

In your own exploration of the film, memoir, or the larger work of Bryan Stevenson and the Equal Justice Initiative, we invite you to dive deeper with Facing History and Ourselves’ resources. Our lesson “Acknowledging the Past to Shape the Present” includes readings about Stevenson’s work, as well as guiding questions and examples for wrestling with difficult histories in order to make positive change in your own community.

Alijah is a Marketing and Communications Writer at Facing History and Ourselves
At Facing History and Ourselves, we value conversation—in classrooms, in our professional development for educators, and online. When you comment on Facing Today, you're engaging with our worldwide community of learners, so please take care that your contributions are constructive, civil, and advance the conversation.