Why "To Kill a Mockingbird" Still Resonates Today

To Kill a Mockingbird is set in a small town in Alabama in the 1930s, a town much like the one in which author Harper Lee came of age. Although I grew up a generation later, I see much of myself in Scout, the young white girl who narrates the book.

Like Alabama in the 1930s, Tennessee in the 1950s was a place where separate never meant equal. It was a place where "colored" water fountains did not spout brightly colored water as a child might expect, but stood as symbols of the dogmas of racism, which meant indignity, shame, and humiliation for some and indifference, false pride, and hate for others. 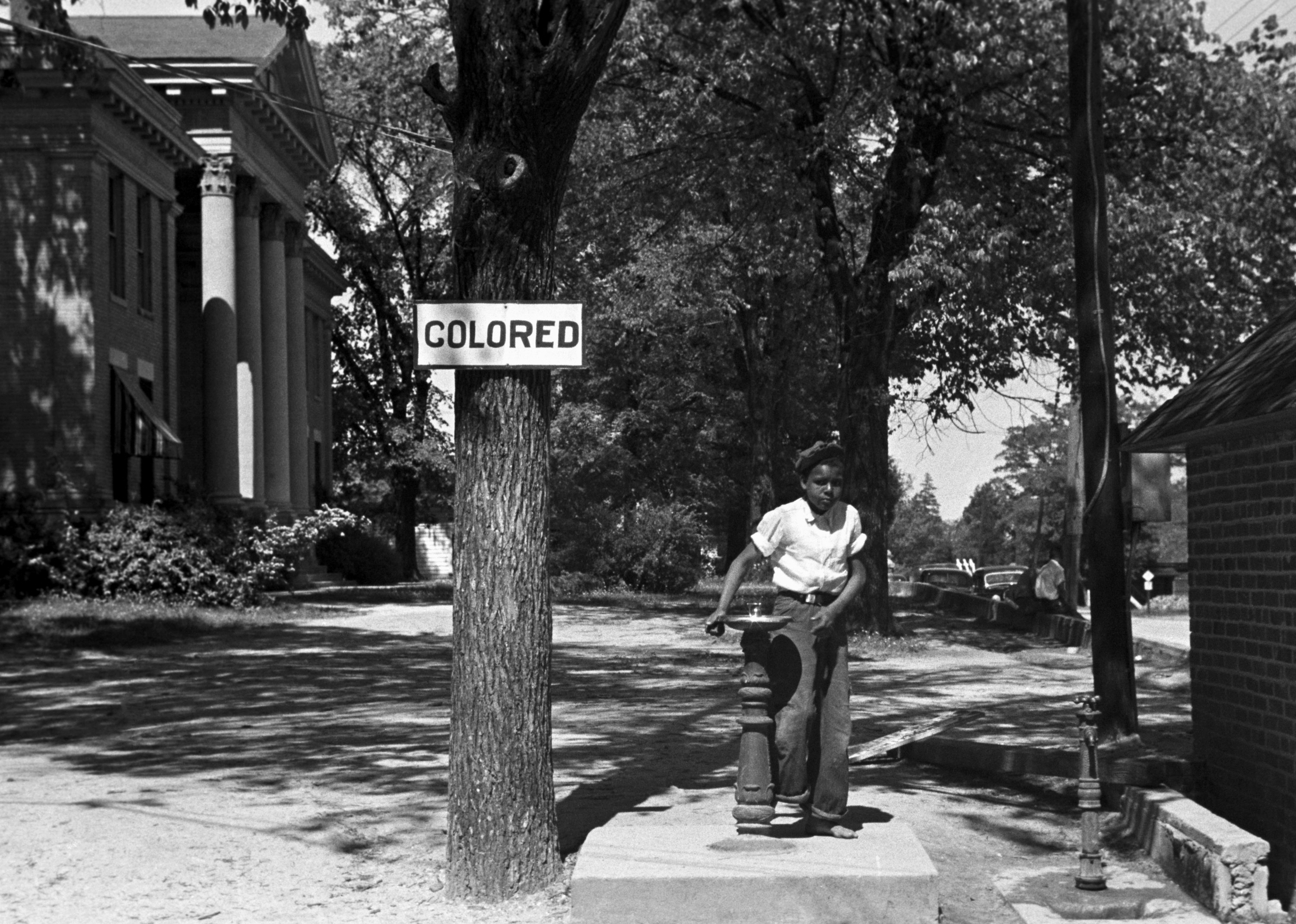 Image courtesy of Library of Congress

At school my teachers carefully avoided any mention of race, class, or gender. Like Scout, I learned those lessons from my family. When Scout comes to her father with questions about human behavior, he doesn't give her advice on what to say or do. Instead, he tells her that the "trick" to understanding another person is to consider things from his or her point of view. For nearly 40 years, that has been the work of Facing History and Ourselves. We trust students to wrestle with complex choices in the past and present so that they will better understand the social mores of our time. We encourage them to think critically and independently in much the way Atticus, Scout's father, engages his children.

Like my teachers, Scout's teacher misses an opportunity to trust her students with the complexities of history and human behavior. Each week at Scout's school, there is a current events period where each student clips an item from a newspaper and shares the contents with the class. In one lesson, a child, Cecil, shares his current event: "Old Adolf Hitler has been prosecutin' the Jews," he says. Scout's teacher, Miss Gates, stops him to correct his choice of words: it is "persecuting" not "prosecuting," she tells him. Cecil shrugs off the correction and describes how Hitler's "puttin' 'em in prisons and he's taking away all their property and he won't let any of 'em out of the country."

Another child asks how Hitler can just lock up people without the government stopping him. Miss Gates replies, "Hitler is the government." And then "seizing an opportunity to make education dynamic," she prints DEMOCRACY in large letters on the chalkboard and asks for a definition. Scout responds by reciting an old campaign slogan she learned from her father: "Equal rights for all, special privileges for none." Miss Gates smiles her approval and prints "WE ARE A" in front of the word DEMOCRACY on the chalkboard. She then tells the class that this is the difference between America and Germany.

"We are a democracy and Germany is a dictatorship," she says. She goes on to say, "Over here we don't believe in persecuting anybody. Persecution comes from people who are prejudiced." And then she enunciates the word Pre-ju-dice.

When a student asks why the Germans don't like Jews, Miss Gates says she doesn't know the answer but perhaps it's because they are a "deeply religious people" and "Hitler's trying to do away with religion." At this point, Cecil offers another explanation. He tells Miss Gates he doesn't know for certain, but the Jews are "supposed to change money or somethin', but that ain't no cause to persecute 'em. They're white, ain't they?"

Miss Gates responds by shutting down the discussion. Surely, she knows, as most people did at the time, that Hitler was persecuting Jews because he claimed they belonged to an evil and inferior race; but race is a forbidden subject in a community where Jim Crow is part of the fabric of society. So Miss Gates decides to ignore Cecil's question and move on: "Time for arithmetic, children." 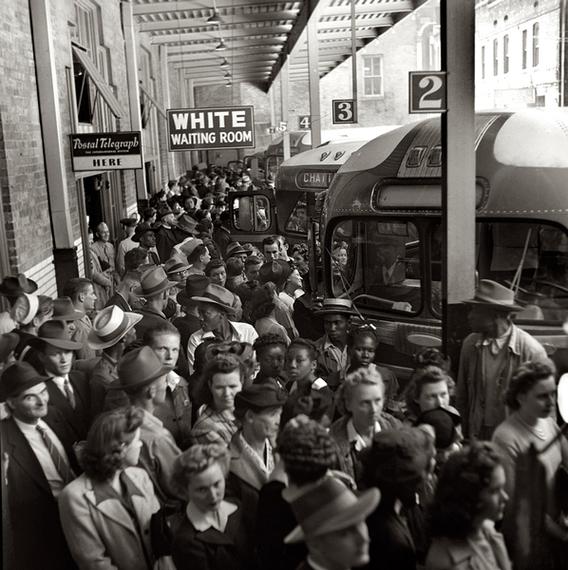 Image courtesy of Library of Congress

Scout spends the rest of the period looking out the window, convinced that school is irrelevant. It doesn't help her reckon with the prejudices that inflamed the community during the trial of Tom Robinson, an African American her father defended in court after Robinson was falsely accused of raping a white young woman.

It is at home that Scout and her older brother Jem begin to confront the injustice done to Robinson, and begin to acknowledge the racism that defines their community and underpins its legal system. When Jem expresses his anger at the jury that convicted Robinson, Atticus tells Jem that if he and 11 other boys like him had been on that jury, Tom would be a free man. He goes on to say of the actual jurors:

"Those are twelve reasonable men in everyday life, Tom's jury, but you saw something come between them and reason...There's something in our world that makes men lose their heads—they couldn't be fair if they tried. In our courts, when it's a white man's word against a black man's, the white man always wins. They're ugly, but those are the facts of life."

Jem mutters that those facts don't make things right. His father agrees. He reminds the boy that "the one place where a man ought to get a square deal is in a courtroom, be he any color of the rainbow, but people have a way of carrying their resentments into a jury box." Atticus tells Jem and Scout that some day there will be a "bill to pay" for the injustices, the violence, and the persecution.

That day had not yet come. A white man attacks Scout and Jem because their father defended a black man in court. In the end, Boo Radley, a neighbor who is a recluse, saves the children. Scout and Jem have always imagined him as a monster who threatens small children. By the end of the book, they discover that he has been quietly protecting them at a time when their father could not. After saving their lives, "Mr. Arthur" (as Scout now thinks of Boo) allows the young girl to walk him home. As they reach his house, Scout realizes that her father was right to tell her that "you never really know a man until you stand in his shoes and walk around in them." Later that evening, Scout decides that she and her brother will eventually "get grown," but as a result of their experiences with the trial and with Boo "there wasn't much left" for them to learn at school, "except possibly algebra." 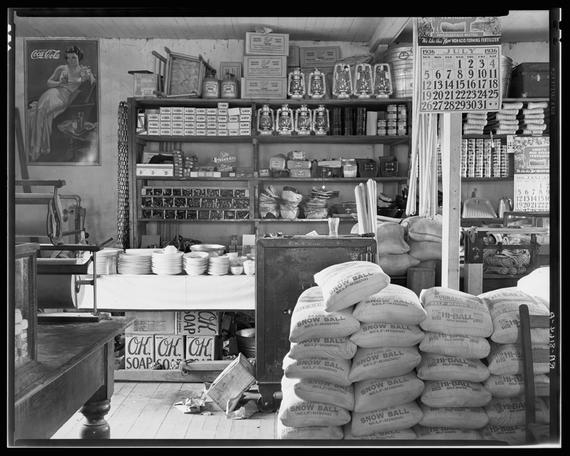 Photo by Walker Evans, courtesy of Library of Congress

When Harper Lee's book was published in 1960, it became an overnight sensation. Courageous African Americans were bringing issues of race, fairness, and simple justice to the attention of the nation, and of the world, by appealing to the conscience of all people everywhere. The discussions they inspired are at the heart of a democratic society—one that truly strives to provide "equal rights for all, special privileges for none," one that insists on "a square deal" for every individual in its courtrooms and every child in its classrooms. To Kill a Mockingbird is as relevant today as it was in 1960; there have been significant gains, but we still have a way to go. These issues are at the heart of every Facing History and Ourselves classroom.

Watch a video of Margot Stern Strom reflecting on growing up in Memphis:

Our resource, Teaching Mockingbird, offers a fresh take on a classic novel and engages students in the issues central to the novel—and their own lives—including race, class, gender, justice, and moral growth.

Did you read To Kill a Mockingbird? Tell us why the book made a lasting impact on you with a comment below!