Choosing to Participate in the Ice Bucket Challenge

Posted by Daniel Braunfeld on September 12, 2014

As any Facing History teacher will tell you, many of our lessons begin with stories of identity. To introduce identity, and to start thinking about the various aspects that make up our own identities, we often use an Identity Chart teaching strategy.


Here is part of my Identity Chart: I am the grandson of a deceased ALS (amyotrophic lateral sclerosis, often known as Lou Gehrig’s disease) patient, the child of and part-time nurse for my father (diagnosed with familial ALS in 2010), the son of my mother (who is the full-time caregiver of my father), the brother who, along with my sister, has a 50/50 chance of getting ALS, and the father to two amazing children whose chances of an ALS diagnosis are yet to be determined.

The lives of my loved ones, and potentially my own life, depend on finding a cure, a treatment, or a cause for ALS. And for that reason, I know that I can be biased when I discuss ALS and the future of this disease. As per the recommendation of psychologist and diversity scholar Binna Kandola OBE, I try to recognize my bias as best I can.

Yet when I first heard of the ALS Ice Bucket Challenge, a social media phenomenon that swept the globe the past few weeks resulting in over $100 million in donations, I wasn't sure what to think. Facing History program associate Denny Conklin was the first person I saw dump ice on his head. I had a ton of questions: Why was he doing this? How was he connected to ALS? Was there something going on? (Thanks for answering all of those questions, Denny.) Soon, a few other friends shared their videos and I realized that something was indeed going on.

Like many others, I debated whether this campaign "was good for ALS." Sure it was raising money, but was it educating people? Was it making a difference? Was it creating actual awareness or were people just saying the letters A-L-S without understanding the horrific picture those letters create, a picture my family faces every single day?

As momentum picked up, I dropped my skepticism and became an ardent and public advocate for soaking oneself in ice (as well as in ice water, cold water, really whatever I could get my hands on). 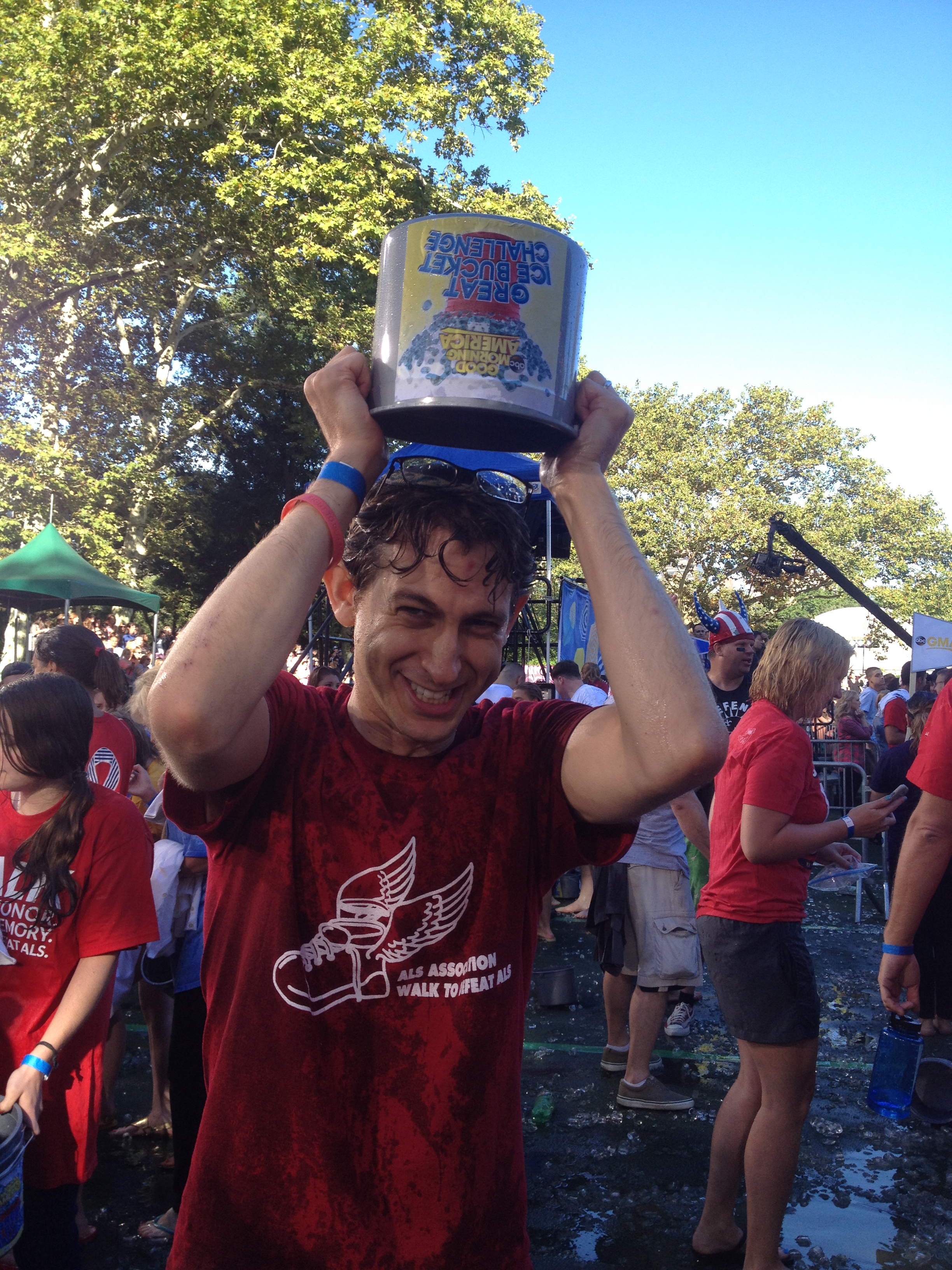 I encouraged everyone I knew, everyone I saw, and everyone I met to participate in the campaign. I stopped people on the subway when I heard them discussing the challenge and asked them what they knew about ALS, sharing my family's experience if we had enough time between stops. I talked to colleagues who told me that the challenge encouraged their children to ask about ALS. One colleague used the challenge to help her daughter understand that ALS is a neurodegenerative disease, not another form of cancer. I finally told my three-year-old, who for two years has been one of my father’s favorite nurses and who can explain that "grandpa is in a wheelchair because his muscles aren't strong anymore," that her grandpa has something called ALS. And when she learned she could dump water on her own head to support him, she was ecstatic. Within days, the fundraising page my family established to honor my father exploded with support.

I have heard complaints that the campaign doesn't create real upstanders. "A hashtag is not a movement," "an ice bucket is not a cure," "there are other pressing issues in the world," people say. I get that, but I also see how the campaign has made a difference – how the small actions of individuals across the world contributed to a big change.

To date, the ALS Association (ALSA) has raised over $100 million (in contrast, they raised $2.8 million during the same time period last year), and other ALS research organizations are seeing impressive increases in support as well. What's more, there are over two million new donors to the ALSA – new people who are learning about this disease for the first time. And by simply talking about it – in person, on social media, wherever – we are drawing more attention to it. Even if you add their family members and networks, the 30,000 patients currently living with ALS cannot stir up enough sympathy to motivate funding, research efforts, and political advocacy at this level. But now the world has taken notice, and is using its voice, and bags of ice, to show its support.

The results are this: We are giving a voice to the voiceless and telling a story that for the past 75 years (since Lou Gehrig retired from baseball) has gone largely unheard.

ALS patients are often paralyzed, incapable of speaking, and/or are on life support, and yet they can continue to think clearly. I know my father is encouraged by the outpouring of support and my mom is eager to see the craze taking over Facebook. My sister and I stay up for hours expressing our appreciation of the videos we see and sharing information about ALS and our father’s experience with our networks.

Just this week, New York Congresswoman Nita Lowey invited our family to meet with her, as well as with representatives of ALSA and Pat Quinn, co-creator of the #alsicebucketchallenge. Together we spoke for over an hour about the need for increased funding for research. This meeting would not have happened were it not for the sudden attention ALS has received. And who knows, perhaps this small meeting and this surge in awareness will go on to make a big difference in the history of ALS. 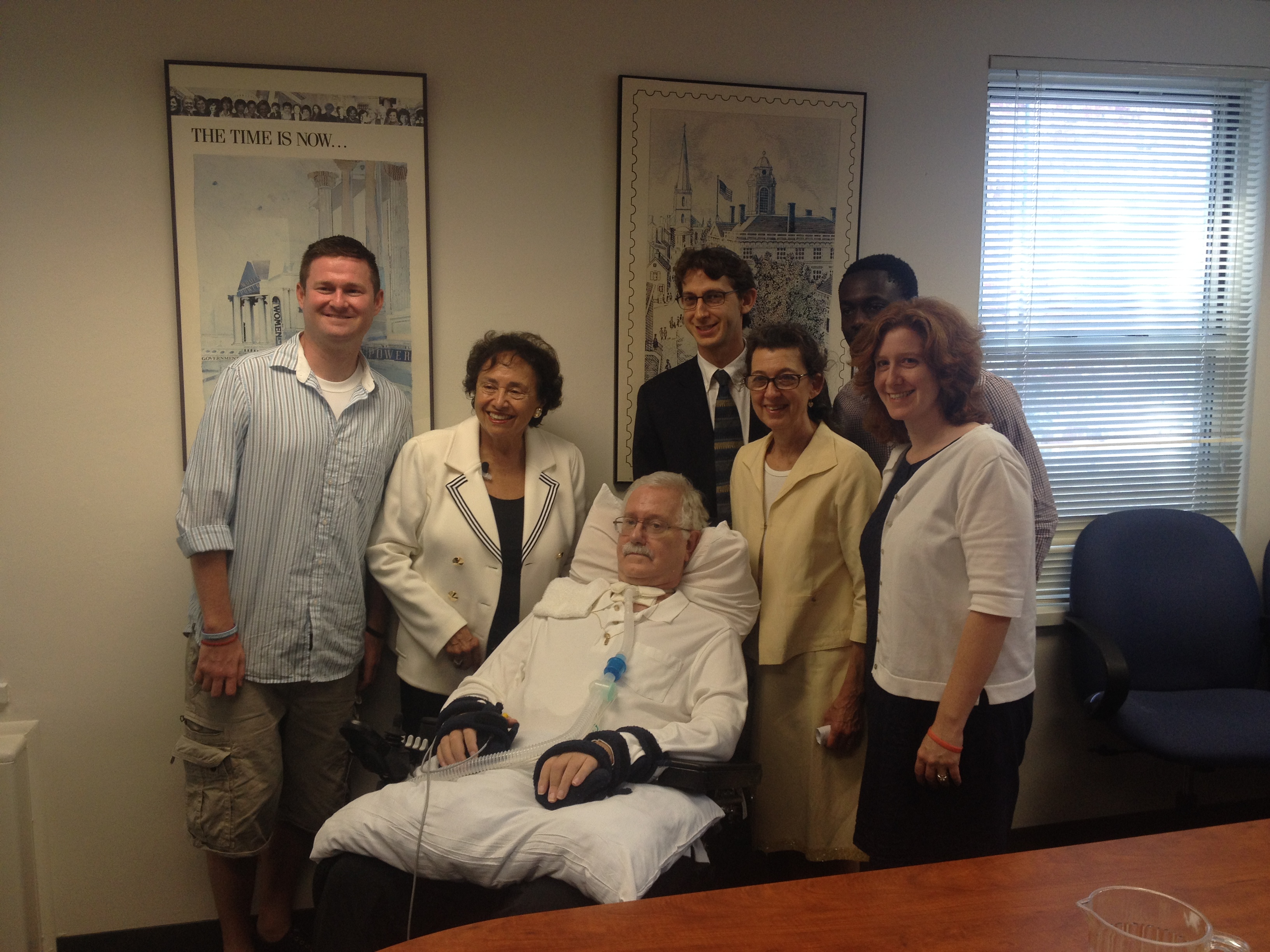 There are lots of charities in need. There are lots of crucial issues here and abroad. But what I've learned from Facing History is that I can hold multiple narratives, multiple priorities, and multiple values in my mind simultaneously. The attention, success, and momentum of the ice bucket challenge do not mean that we are blind to other needs in the world.

While facilitating a Facing History seminar on Race and Membership in American History in New York this summer, a participant pointed to the ice bucket challenge as an example of students not learning what it means to meaningfully participate in society. This educator did not know my history with the disease, had not seen my ALS-infused Identity Chart, and I chose not to take her comment as a personal attack.

"Yes, it might start that way," I responded, "but how do we build upon this first step of activism to help our students become committed to this greater cause?"

I thought of a civil rights documentary I once saw in which a man admitted that he participated in a school walkout because he found the organizer attractive. I don't believe campaigns should get canceled just because each individual participating may not be in it for the "right" reasons. For many of our students, accepting the Ice Bucket Challenge was a first step in choosing to participate. These students helped to raise money, educated themselves and their friends, and used their voice to support this important cause. It might be tempting to look at the challenge as a fad, but that would miss the teachable moment to help students recognize the power of many individuals participating in a common cause.

Psychologist Ervin Staub says that we can teach young people to be upstanders if we connect their first acts of participation to the idea of a conscious community – to being helpful members of society. This summer, many young people around the world took their first steps toward becoming a part of such a community, and as educators, friends, parents, siblings, cousins, and mentors, we have an opportunity to build upon that interest. Tomorrow's scientists, public policy officials, and ethical practitioners are sitting in today's classrooms.

We cannot predict the impact or the consequences of our choices, no matter how small they might appear in the moment. And as teachers, we must look for opportunities to foster student engagement and to show young people that they have the power to choose to participate in the world. The lesson is to act, and to act in a way that is true to oneself. Pat Quinn had no idea his challenge would reach this level of popularity when he took that first step (or rather, dumped that first bucket). People make choices and choices make history.

Continue the conversation about equality, injustice, and what it means to be an upstander. Join our Facing History Together community today.

Daniel Braunfeld is Senior Program Associate for Special Projects in the New York office of Facing History. Prior to joining Facing History in 2011, he worked at the Facing History School as a Teacher Leader in the Humanities Department and as a facilitator and advisor.
At Facing History and Ourselves, we value conversation—in classrooms, in our professional development for educators, and online. When you comment on Facing Today, you're engaging with our worldwide community of learners, so please take care that your contributions are constructive, civil, and advance the conversation.