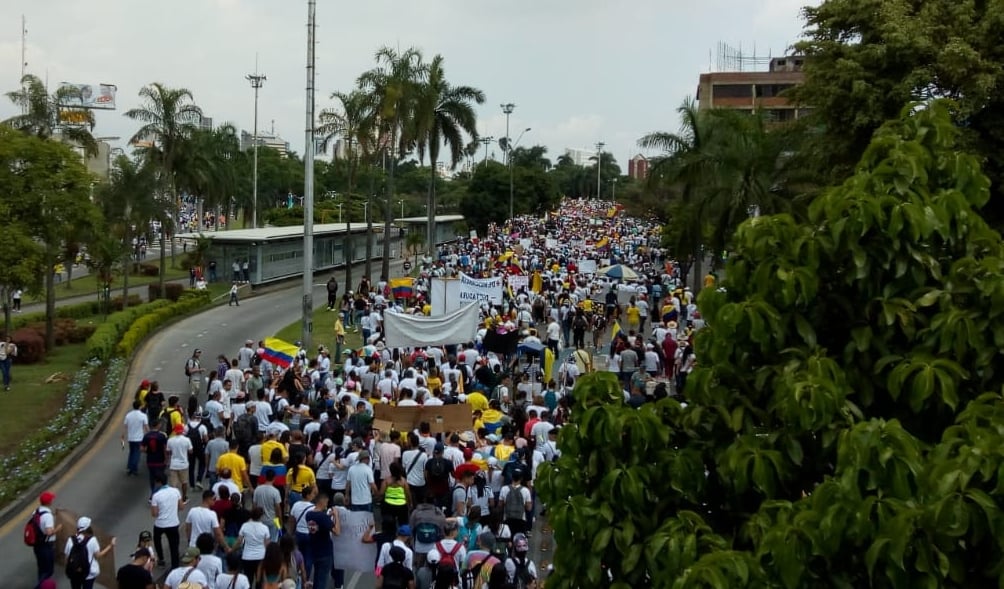 The 21st was a day of marches throughout the national territory where various groups converged with different agendas: university students fighting for their education, workers for their labor rights, groups against animal abuse, and the general population demanding compliance with the peace agreements signed with the oldest guerrilla in the continent. Voices were also raised in favor of other demands as diverse as the fight against corruption, inequity, and injustice—against the recent murders of social leaders, the bombings by the army in which children died, and the deep discontent generated by the upcoming pension and finance reforms. For a great summary of the reasons behind the strike, see “Colombia is having its largest wave of protests in recent decades. Why?”

The protest continued and the first days were full of uncertainty: violence erupted in different parts of the city, both from the unsatisfied citizen minority and from the State forces. It seemed the situation was getting out of control and a curfew was established in Bogotá, the capital city of Colombia, for the first time in 42 years. Some fears also surfaced: the people turned against Venezuelan refugees, imagining them as culprits while the political far-right in the country accused the leftist social movement in Latin America of instigating terrorism.

However, the citizenship gave a strong statement of nonviolence: the rallies continued for several days with almost no sign of it. The protestors turned against the small groups that were causing damages or attacking the police forces and went out with spoons and saucepans in hand to make noise (“cacerolazo”), to show both to the violent minority and to the state, that they were not going to allow their demands to be silenced. The strike became a touching moment in Colombian history that showed the raising of civic voices, the political commitment and the need to reconcile decades of seemingly insurmountable differences and injustices.

We have all been learning a lot from the current events, which have been especially interesting for schools because they give us several pedagogical opportunities. On the one hand, we have an opportunity to speak about our history: the building of a nation and a war that has changed so many times, making citizens go from friends to enemies and making antagonist political parties friends in their quest to maintain power. On the other hand, we have a chance to speak about nonviolence and citizenship education, teaching empathy and the importance of understanding the Other in a country characterized by its diversity. Finally, it is a perfect moment to build strategies upon dialogue, for we need to be able to understand our past, our differences, and start building the future with our fellow citizens.

Facing History and Ourselves invites you to learn about our International Program, and consider the connections between these events in Colombia and your own spheres of influence.

Juan Camilo Aljuri Pimiento has a B.A. and a M.A. in History. He has spent the last decade working for different government agencies in Colombia, leading nationwide strategies for the prevention of school violence, peace education, and fostering active citizenship and socio-emotional abilities in students. He is one of the founding members of the Memoria y Ciudadanía Foundation, a vegan and a passionate videogamer, who cares deeply about the relationship between education and children’s rights in Colombia.
At Facing History and Ourselves, we value conversation—in classrooms, in our professional development for educators, and online. When you comment on Facing Today, you're engaging with our worldwide community of learners, so please take care that your contributions are constructive, civil, and advance the conversation.