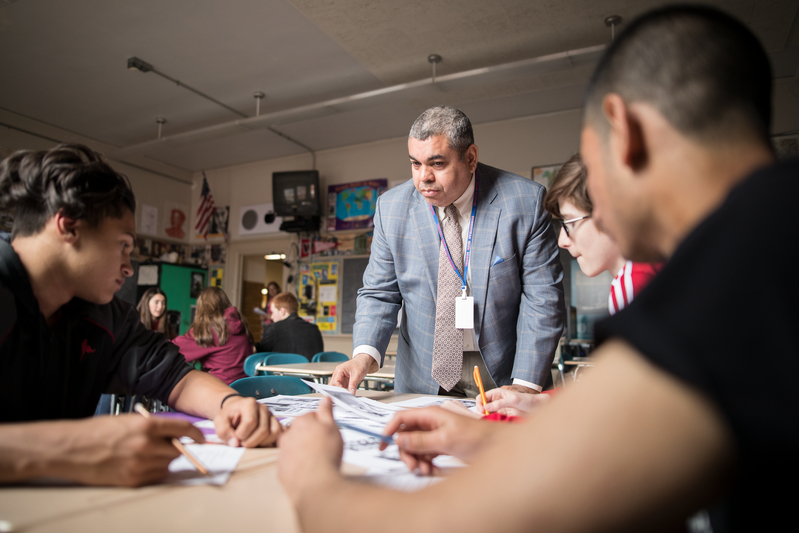 Today - in a period of democratic decline worldwide, as many Americans question the health of our own institutions and the commitment of our citizenry to democratic values - we find ourselves in a “Sputnik moment” for civics, not unlike the time following the Soviet rocket launch in 1957 that sparked national investments in STEM education. The Educating for American Democracy (EAD) project was conceived to address the needs of this moment by reinvigorating US History and civics education. Funded by the National Endowment for the Humanities and the US Department of Education, and led by a multifaceted coalition of scholars and educators, EAD set the ambitious goal of crafting a rationale and roadmap for better teaching, one that reaches and empowers all students and can be embraced across our divided country. Since its launch in early March, EAD has received widespread media coverage, and has been endorsed by 6 former US Secretaries of Education.

Serving on the Steering Committee of EAD, I was able to contribute insights drawn from Facing History and Ourselves’ approach to educating for democracy, developed over our 45 years of work in the field. Like other leaders of EAD, we have long believed that civics should be integrated with history. Facing History’s approach recognizes that America’s founding documents, institutions and systems can’t be understood in isolation from their historical and present context. We invite students to probe the gaps between American ideals and the lived realities of injustice too many still face in this country, to recognize the fragile and elusive nature of true democracy, and to consider, at the same time, the powerful levers used by ordinary people to seek greater inclusion, equity and justice.

As a group, contributors to EAD were diverse in multiple dimensions, including identity, politics, and professional roles. Our process modeled the thoughtfulness, robust civil dialogue across difference, and collaboration towards common goals that I might wish for the country writ large.

The Roadmap we produced is not a wan consensus document, but a robust framework that embraces the complexity and tensions inherent in US history and civic life. Through a series of “design challenges,” we invite teachers to explore, not avoid, the enduring tensions that shape the US past and present. These design challenges ask questions including,

How can we offer an account of U.S. constitutional democracy that is simultaneously honest about the wrongs of the past without falling into cynicism, and appreciative of the founding of the United States without tipping into adulation?

How can we integrate the perspectives of Americans from all different backgrounds when narrating a history of the U.S. and explicating the content of the philosophical foundations of American constitutional democracy? How can this more plural and more complete story of our history and foundations also be a common story, the shared inheritance of all Americans?

We recognize, as our friend Eric Liu has written, that “America doesn’t just have arguments; America is an argument—between Federalist and Anti-Federalist world views, strong national government and local control, liberty and equality, individual rights and collective responsibility, color-blindness and color-consciousness, Pluribus and Unum.” The EAD Roadmap offers a way to make these enduring tensions a spark for inquiry, deeper learning, and civil discourse in the classroom - experiences that will build not just civic knowledge, but also the civic skills and dispositions that students will need to strengthen US democracy.

Along with other contributors to EAD, we’ll be introducing the Roadmap to our network and offering professional learning opportunities for educators. Please join us for our first webinar on April 13, held in collaboration with the Bill of Rights Institute, another EAD partner organization. We’ll be exploring “How EAD’s Design Challenges Help Teachers Strengthen History and Civics Teaching.”

Join us by clicking the registration link below!