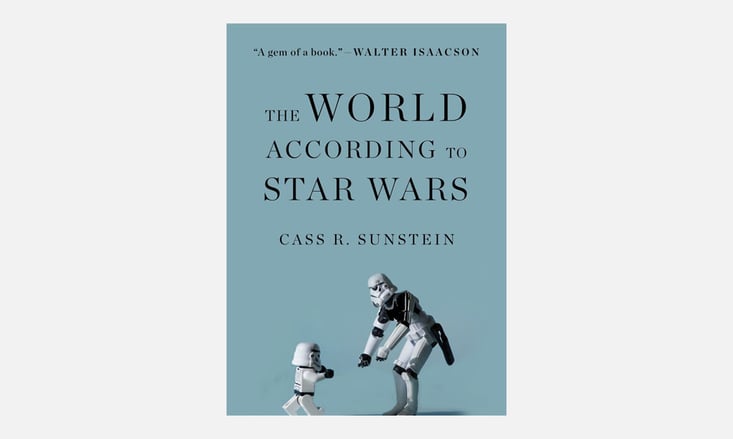 At Facing History, we love finding connections to our work everywhere, even in Star Wars. It turns out we aren’t the only one! Author Cass R. Sunstein shares an excerpt from his newly released book, The World According to Star Wars.

Star Wars isn’t a political tract, but it has a political message. After all, it opposes an Empire to a Republic and a First Order to a Resistance, and its heroes are rebels, who want to return peace and justice to the galaxy.

That’s one reason for the universal appeal of the saga. Whatever your political convictions, and wherever you live, you’re likely to see an Emperor of some kind, and you’re likely to have some sympathy for the rebels or the Resistance. Your teacher or your boss might seem like an Emperor. Maybe your nation’s leader reminds you of Palpatine; maybe the opposing party is the Resistance….

It’s pretty safe to say that Star Wars criticizes centralized authority, and its rebel heart lies with those who try to resist it.

The prequels focus on the rise of tyranny and the collapse of democracies. They explore the kinds of machinations that allow dictators to come to power, and they show how republics fall prey to them.

There’s a stylized account of the loss of freedom, which Padme nicely captures: “So this is how liberty dies . . . with thunderous applause.” (We’ll get to Nazi Germany pretty soon.) With respect to politics and the death of republics, Star Wars tells a perfectly recognizable tale. It offers a warning about the need for citizen vigilance against the countless would-be emperors who try to accumulate power at the expense of the public. That’s why people in so many different nations can appreciate its politics—and it will forever be so.

The Force Awakens, J.J. Abrams explained in a magazine interview, “came out of conversations about what would have happened if the Nazis all went to Argentina but then started working together again? What could be born of that? Could the First Order exist as a group that actually admired the Empire? Could the work of the Empire be seen as unfulfilled? And could Vader be a martyr? Could there be a need to see through what didn’t get done?” That’s the origin of the third trilogy.

When drafting the prequels, [George] Lucas began researching the transition from democracies to dictatorships, examining “why . . . the senate after killing Caesar turn[ed] around and g[a]ve the government to his nephew? . . . Why did France after they got rid of the king and that whole system turn around and give it to Napoleon?” He noted:

It’s the same thing with Germany and Hitler . . . You sort of see these recurring themes where a democracy turns itself into a dictatorship, and it always seems to happen kind of in the same way, with the same kinds of issues, and threats from the outside, needing more control. A democratic body, a senate, not being able to function properly because everybody’s squabbling, there’s corruption.

Hitler was apparently a model for Palpatine, and in Germany, the fuhrer’s own rise was confirmed by his successful claim to general authority to make law, free from any requirement of legislative authorization. In the midst of an apparent crisis, signaled by a fire at the Reichstag (legislative) building, Hitler demanded that authority. A chilling newspaper account on February 2, 1933 reads like something right out of Star Wars, but it’s quite real:

The power to dissolve Parliament at his discretion and to rule Germany by decree without Parliament was entrusted today to Adolf Hitler, Germany’s new Chancellor by President Paul von Hindenburg, according to the Deutsche Allgemeine Zeitung, an organ close to the Government. President von Hindenburg signed a decree for the dissolution of Parliament, which is expected to become effective before the reconvening of Parliament, scheduled for next Tuesday.

In Attack of the Clones, Mas Amedda says: “The Senate must vote to give the Chancellor emergency powers.” Accepting those powers, Palpatine insists, “It is with great reluctance that I have agreed to this calling. I love democracy. I love the Republic. Once the crisis has abated, I will lay down the powers you have given me!”

Explore the fragility of democracy!


What interesting connections to Facing History have you seen? Share them with us!

*This excerpt was originally posted on Facing History's Los Angeles blog, Learn+Teach+Share on May 24, 2016.

Cass R. Sunstein is the Robert Walmsley University Professor at Harvard, where he is founder and director of the Program on Behavioral Economics and Public Policy. He is the most cited law professor in the United States and probably the world. He has served as Administrator of the White House Office of Information and Regulatory Affairs and as a member of the President’s Review Group on Intelligence and Communications Technologies. His many books include the bestseller Nudge: Improving Decisions about Health, Wealth, and Happiness (with Richard H. Thaler), Simpler: The Future of Government, and Republic.com. A frequent adviser to governments all over the world and a columnist for Bloomberg View, he is married to the United States Ambassador to the United Nations, Samantha Power.
At Facing History and Ourselves, we value conversation—in classrooms, in our professional development for educators, and online. When you comment on Facing Today, you're engaging with our worldwide community of learners, so please take care that your contributions are constructive, civil, and advance the conversation.