In several areas of the United States, April is recognized as Genocide Awareness and Prevention Month.
Here are four classroom resources you can use in April, or any time of year, to introduce your students to specific moments in world history while encouraging them to consider the behaviors—such as prejudice, stereotyping, and conformity—that contribute to the proliferation of violence today.

EXPLORE IT: The Aftermath Project 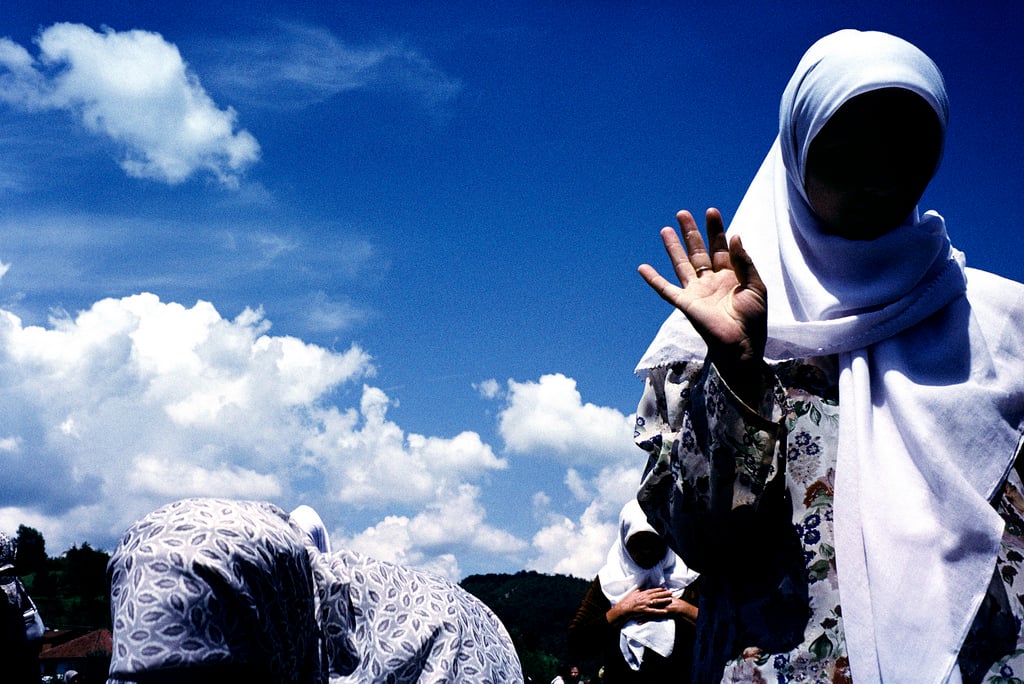 Muslim widows during the prayer for the dead offered at the groundbreaking of a memorial site for the 7,000 to 8,000 Muslim men and boys who were massacred by Bosnian Serb forces in 1995. Courtesy of Sara Terry.

After Bosnia and Herzegovina declared independence on April 5, 1992, Bosnian Serb leaders began a military campaign to clear all the Muslim communities that stood in the way of their vision of a "Greater Serbia." The violence reached its peak in the summer of 1995 in Srebrenica, where Serbs massacred over 8,000 Muslim men. Our multimedia resource The Aftermath Project examines this history through stories that communities share after war ends as well as the media's portrayal of mass violence. Explore the unit on Bosnia, which features photographs and new media storytelling that meet the Common Core State Standards.

WATCH IT: Eyewitness to history

Between July 1937 and April 1945, the Nazi SS imprisoned some 250,000 persons from countries throughout Europe in the Buchenwald concentration camp. On April 11, 1945, United States forces entered Buchenwald and liberated the prisoners. Watch the following video featuring Leon Bass, a black member of the U.S. armed forces who was on the ground that day. Hear him describe the scene at Buchenwald and reflect on how his experiences in the army affected his outlook on racism and injustice once he returned to the U.S. after the war.

WRITE IT: Prompts to study the Armenian Genocide

The Armenian Genocide broke out on April 24, 1915. Explore the history of this period with our resource Crimes Against Humanity and Civilization: The Genocide of the Armenians, available for free download. In addition to covering the history of the Armenian Genocide and the evolution of the term "genocide," the resource includes connection questions for student reflection, suggested further reading, and primary source documents that can help prompt writing activities or in-class discussions.

Register today for an upcoming Facing History professional development opportunity. Through our guides and teaching methods, students are introduced to individuals who have shown courage and compassion throughout history in the face of injustice, and see that their own daily choices can have major impacts and perhaps even be a critical link to a safer future.

What resources do you use to teach about genocide and its prevention? Comment below.