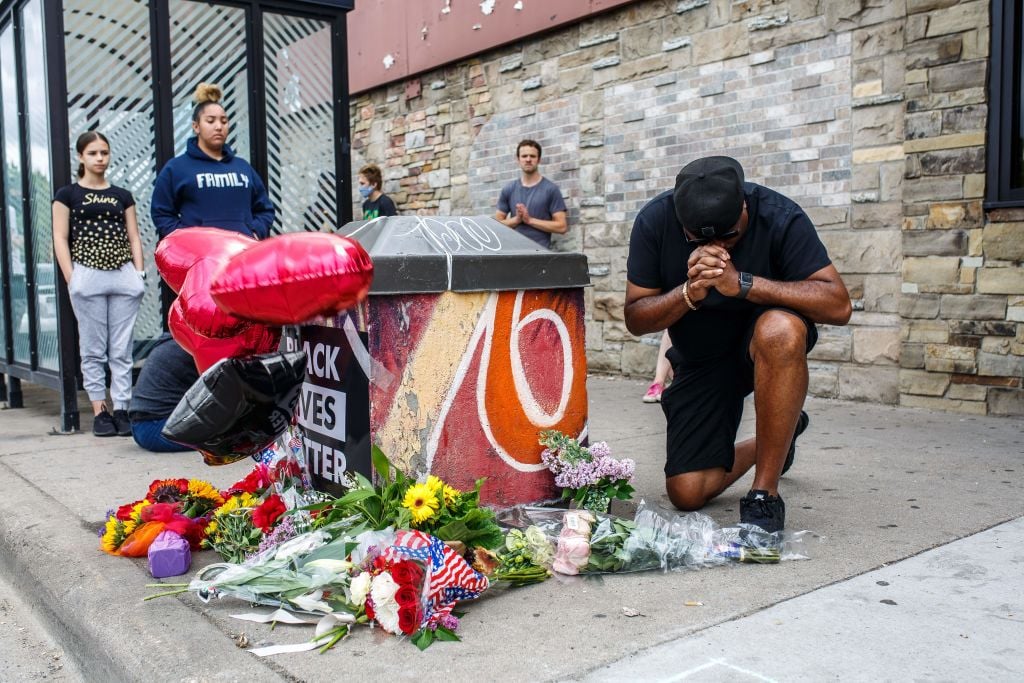 We have all seen the images of fires burning in my hometown of Minneapolis. Pain and outrage have overflowed in protests resulting from the police killing of George Floyd on Monday of this week. Officer Derek Chauvin, who kept his knee on Floyd's neck, despite his outcry that he couldn't breathe and that they were going to kill him, has now been taken into custody, charged with murder and manslaughter.

My first level is prideful shame, mostly affecting my surface layers. My shame stems from growing up in Minneapolis and wanting to retain the belief of my youth in "Minnesota nice," the idea that "everyone here gets treated fairly." I’ve known for a long time that the reality is inequitable, but what's got me ashamed is my own resistance to acknowledging that Minneapolis is diseased in the same way as the rest of our country. There are deep structural fractures in the fabric of our society; none of us should be surprised when that fabric tears in predictable ways. My blind spot of Minnesota provincialism will heal, perhaps without leaving a scar. But even as it heals, I want to draw a lesson: recognizing the dangers still to come and the damages already branded into history is incumbent on all of us, no matter where we live or the color of our skin.

My second pain is a painful and blistering outrage that wounds the underlying layers of my being. I'm a white Jewish man, and I respect that my outrage is at a remove from that of the nation's black communities. But I am heartbroken that we as a nation are failing: despite our best intentions, despite decades-long commitment to ally-ship, we are still in this moment. Our society has allowed a legacy of slave-holding to be passed to law enforcement. Slaveholders believed that they could own the bodies of the enslaved, and so could “discipline” them even to death. This is a legacy that leaped over a failed Reconstruction Era and passed into a century of racial terror lynchings. Now, contemporary police departments also must cope with this inheritance. I'm outraged that so many witness this without bearing witness to it; we all participate in it, even if only through our failure to effectively insist on change and progress. It's an ugly scar we continue to bear.

Finally, I am frightened through and beneath my skin, down through the layers so that the nerves are deadened. This fright means that our souls—all of our souls—are unhealably damaged. We've suffered this too often, and my fright is that society has become inured to police violence directed at black men and women and others who hold less institutional power. It frightens me that, while "black lives matter" initially provoked critical conversations, now too many think of it as just another slogan to which society as a whole need not respond. I am frightened to my core that we'll look back 50 years from now and realize we didn’t do enough to halt the targeting of black men by law enforcement. I'm not sure our country can withstand that future.

What’s needed here and now is a healthy infusion of our best selves. Can we identify the healthiest part of our social fabric and graft it over the rifts we see? Let every one of us resolutely summon up our integrity—which I believe is our strength—and insist on justice in this case and beyond:

Martin Luther King, Jr. once said, “In the final analysis, a riot is the language of the unheard. And what is it that America has failed to hear?”

Let's start hearing right now. We must understand the lesson that our nation’s inequities affect and implicate all of us. It is not someone else's job to make it better. Thank you for being a part of this community that is working so hard to do that.