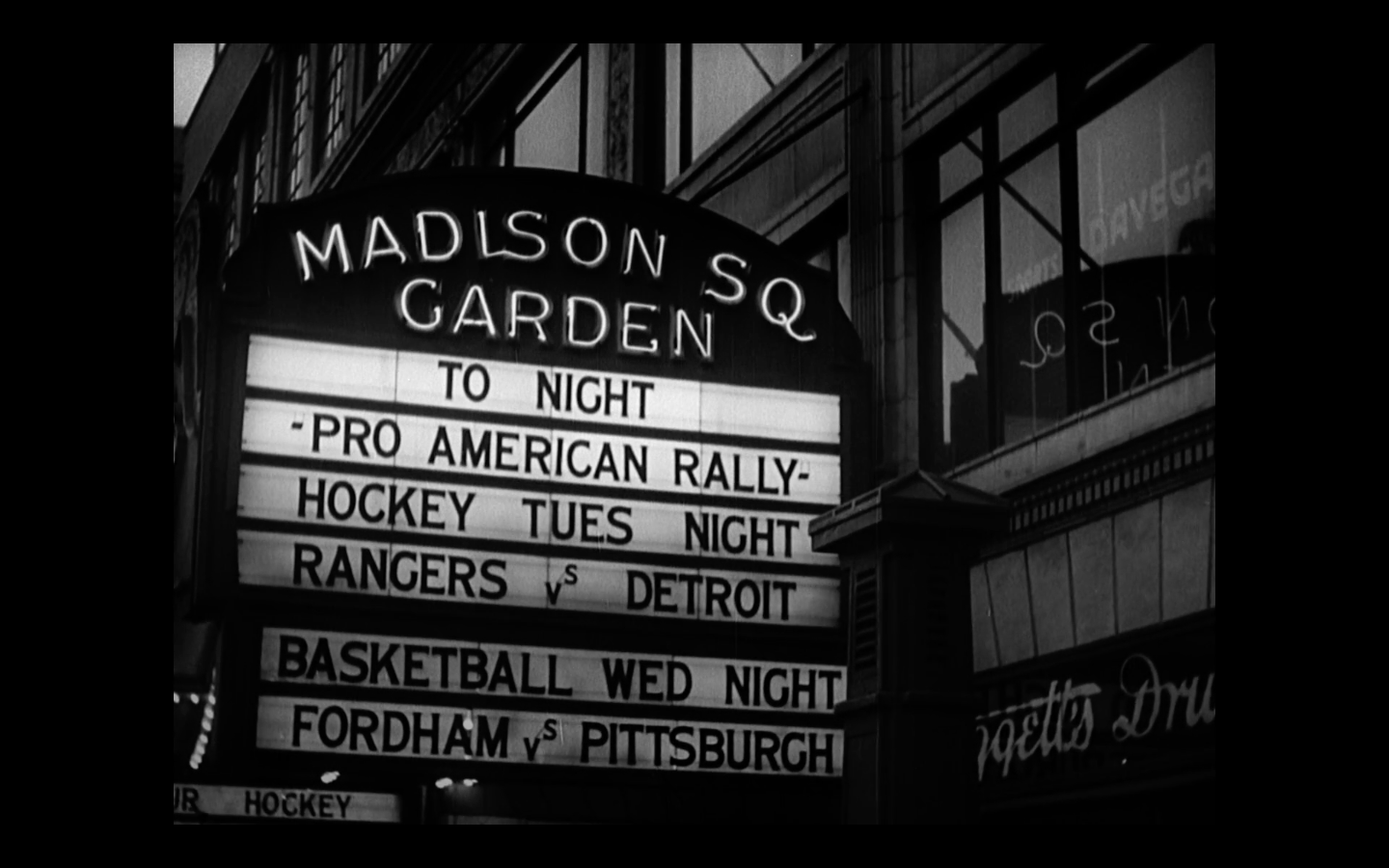 Yet it is not. Inside the Garden, 20,000 New Yorkers fill the arena. The scene is one of discordant unease: a colossal image of George Washington decorates the stage, flanked by both American flags and flags bearing swastikas. The crowd proudly gives Nazi salutes during the Pledge of Allegiance. As the camera pans over the arena, the magnitude of the crowd is palpable across space and time. And it is frightening. This is not Nazi Germany, but New York City, America’s melting pot. In seven months’ time, Hitler will invade Poland.

The rally was organized by the German American Bund, a pro-Nazi group founded in 1936 in the United States. When the Bund’s leader, Fritz Kuhn, takes the stage, he addresses the crowd as “American patriots” before he launches into ridiculing the press. “You all have heard of me through the Jewish controlled press,” he begins, “as a creature with horns, a cloven hoof, and a long tail.” His jokes land, and are met with boisterous laughter from the crowd. This is Kuhn’s version of  “fake news” rhetoric, one that rings all too familiar to contemporary ears. He continues to fire up the crowd with words that could be seamlessly inserted into any number of “Make America Great Again” speeches today. He is met with cheers and applause.

The present-day connections to the 1939 rally and its sentiments are overwhelming. Parallels with the 2017 Unite the Right rally in Charlottesville, Virginia, and the growing alt-right movement demand that we face this history head on. In a Q&A featured on the film’s website, Curry remarks:

I think the rally has slipped out of our collective memory in part because it’s scary and embarrassing. It tells a story about our country that we’d prefer to forget. We’d like to think that when Nazism rose up, all Americans were instantly appalled…When you see 20,000 Americans gathering in Madison Square Garden, you can be sure that many times that were passively supportive.

As Curry suggests, passive support and selective forgetfulness, though seemingly innocuous, can be incredibly dangerous to democratic ideals. In the span of only seven-minutes, the film opens a window to larger discussions around the role of collective identity and memory in the study of history: what factors allowed a hate-fueled event of this size to happen in the first place, and what allowed it to be forgotten? It is crucial to equip students with the tools to think critically about history’s “scary and embarrassing” moments, and how they can use their civic power to prevent them in the future. In Curry’s words, “events like this should remind us not to be complacent – that the things we care about have to be nurtured and defended regularly.”

To mark the 80th anniversary of the rally, the documentary unit that produced the film, Field of Vision, projected excerpts onto Madison Square Garden last Tuesday. The projection culminated with the line “it can happen here.” Here: in this arena, in this city, in this country. Although A Night at the Garden may not have won the Oscar, its power resonates throughout this country and cultural moment. It’s bigger than an award—it’s about the preservation of democracy and decency.

To teach A Night at the Garden in your classroom, use our lesson The Persistence of Hate: What the 2017 Unite the Right Rally Revealed About American Antisemitism for in-depth analysis and discussion topics on contemporary antisemitism, including strategies for discussing the film and the 1939 rally.

Alijah is a Marketing and Communications Writer at Facing History and Ourselves
At Facing History and Ourselves, we value conversation—in classrooms, in our professional development for educators, and online. When you comment on Facing Today, you're engaging with our worldwide community of learners, so please take care that your contributions are constructive, civil, and advance the conversation.