Home > Our Blogs > Facing Today > Our Own Great Witnessing: An American Muslim's Reflection on 9/11

Our Own Great Witnessing: An American Muslim's Reflection on 9/11

Posted by Taymullah Abdur-Rahman on September 11, 2016

Fifteen years after the attacks on September 11, Facing History's New England Program Associate, Taymullah Abdur-Rahman, reflects on how he came to terms with the attacks and their aftermath as an American Muslim. 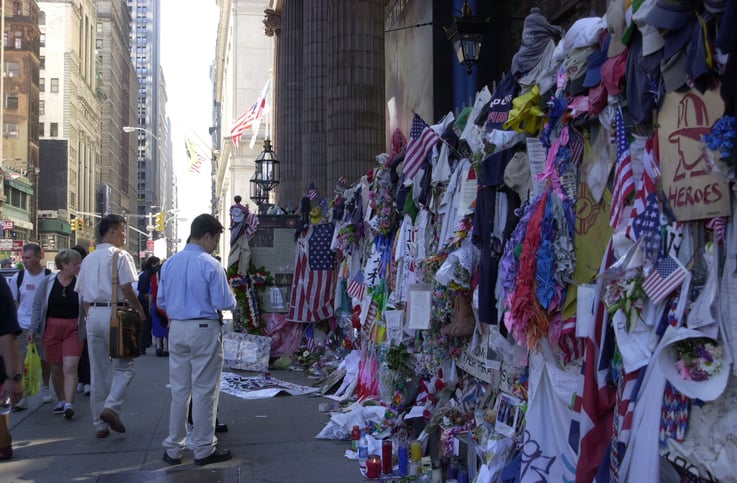 I was dropping my six-year-old son off at school when I heard on the radio that an airplane had crashed into the Twin Towers. Later when it was revealed to be a plot from Al Qaeda, my wife and I sat on the bed; she was in tears. We knew that our narrative as Muslims living in America had shifted forever.

As the years passed, patriotism increased, suspicions flared, and I became defensive. In the early days after the attack, when I listened to the president speak and I saw American flags being hung in my neighborhood it resonated with me. After all, I was an American. I began to think that perhaps 9/11 taught us how to stick together until as a Muslim, I began to feel ostracized by the media. My presumptions began to shift and despair set in.

Perhaps it wasn't about patriotism. Maybe it was about learning how fear makes people suspicious and bigoted. I read about innocent Muslims being attacked across the country and how a Sikh man -- mistaken as Muslim -- had been killed. I wanted to believe that people just hated all Muslims. It justified the smirks and rolling eyes my family and I received while at the mall and grocery store. At the time, I thought having any answer, even if it was half-baked made me feel better, so I stuck with that for a year or two. However, I had experienced too many humane encounters with everyday people to allow that thought to permeate long. As a person who loves to come to definitive conclusions, I found myself confused. There seemed to be two competing narratives in my life, if it wasn't about patriotism or how fear breeds prejudice, what was the lesson of 9/11?

It wasn't until 14 years after 9/11, when I began my work as a Program Associate at Facing History and Ourselves that I started to understand what one might take from the tragedy. In preparing for my work,  I had been wrestling with my understanding of the Holocaust. I spent several months watching hours of documentary footage and reading primary source materials, struggling to come to grips with what I was supposed to do with the enormity of all of this death. What was there to learn from it?

I requested a meeting with Jan Darsa in the Jewish Education Department to gain some insight into how Jewish people felt about the Holocaust. I was eager to ask her some tough questions and I wanted answers. I came into her office with my pen and pad ready to take notes. I sat in the chair facing her, leaned in and with months of built up angst I asked, "Jan, how do we justify the Holocaust?"

That was the wrong question.

Jan smiled and said, "No Tay, we don't justify the Holocaust. Do you mean how do we reconcile what happened?" I didn't ask another question the entire hour I sat in her office. Her response had given me several answers to questions about  other tragedies including 9/11. You can never justify senseless death and destruction. That's what I had been trying to do with 9/11 and now with the Holocaust. And while the two were entirely different, with separate circumstances, I had realized what I could take away from 9/11 through Jan's response to my unintentionally crude question.

I was to be a witness.

I am so grateful to be present at Facing History going into classrooms, facilitating workshops and being a witness. We certainly can never undo what was done to us on that beautiful September morning, nor can we restore what was taken away. But as an American Muslim, it's important for me to be in the room, engaged in the conversation, and not leaning on angry assumptions or misplaced resentment.

Living through 9/11, understanding the innocence it snatched from all of us and being able to use the social/emotional teaching tools that Facing History provides has empowered me and allowed me not to fall victim to false narratives but to shape my own. By using my voice to help others remember and reflect on tragedies long passed but whose effects linger even today, I believe there is hope in preventing future disasters.

In the end, we are all witnesses in one way or another. What we do with our testimony will determine what the future looks like for our children. 9/11 didn't teach me much, but because of it I have learned that each of us must take our experience, our own great witnessing, and use it as a mechanism to edify those around us in a manner that speaks to a responsible future.

*Photo credit: By Lauren Hobart - This image is from the FEMA Photo Library., Public Domain, https://commons.wikimedia.org/w/index.php?curid=8074119

Topics: September 11, Identity, Holocaust, global terrorism, We and They