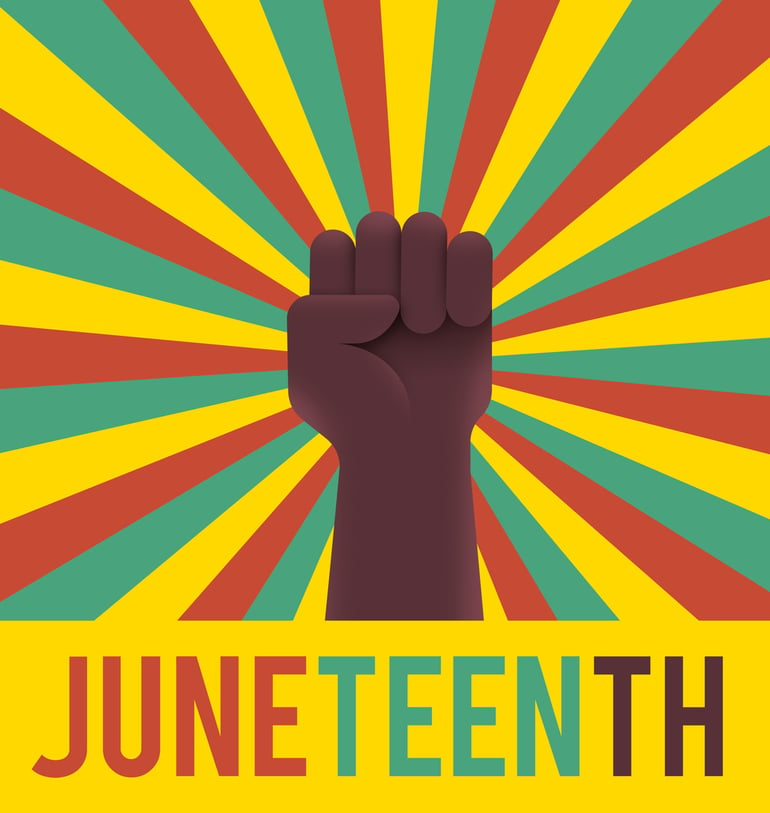 Described as a second independence day, June 19th or Juneteenth marks the day that emancipation reached enslaved people in the furthest reaches of the American South. Though the Emancipation Proclamation established that all enslaved people held within the rebellious states were freed, plantation life continued as though no change had occurred in many parts of the slaveholding South until this day. And just yesterday, the U.S. Senate unanimously approved a bill to make Juneteenth a legal public holiday. Juneteenth is a time to reflect upon this history, as well as the steps toward freedom that have been achieved and the forces that continue to undermine the freedom of African Americans.

Below are 7 books that Facing History staff are reading and/or revisiting this year to deepen their learning and reflection on the many meanings of Black freedom, progress, and resistance.

On Juneteenth
By Annette Gordon-Reed From the publisher: "Weaving together American history, dramatic family chronicle, and searing episodes of memoir, Annette Gordon-Reed's On Juneteenth provides a historian's view of the country's long road to Juneteenth, recounting both its origins in Texas and the enormous hardships that African-Americans have endured in the century since, from Reconstruction through Jim Crow and beyond.

All too aware of the stories of cowboys, ranchers, and oilmen that have long dominated the lore of the Lone Star State, Gordon-Reed--herself a Texas native and the descendant of enslaved people brought to Texas as early as the 1820s--forges a new and profoundly truthful narrative of her home state, with implications for us all...

In its concision, eloquence, and clear presentation of history, On Juneteenth vitally revises conventional renderings of Texas and national history. As our nation verges on recognizing June 19 as a national holiday, On Juneteenth is both an essential account and a stark reminder that the fight for equality is exigent and ongoing." —Liveright Publishing Corporation

How the Word is Passed: A Reckoning with the History of Slavery Across America
By Clint Smith Staff comment: "Clint Smith's evocative prose makes you feel like you are standing in these historically resonant places and experiencing them through him."
—Lisa Lefstein-Berusch, Associate Program Director, Cleveland

From the publisher: “Beginning in his hometown of New Orleans, Clint Smith leads the reader on an unforgettable tour of monuments and landmarks—those that are honest about the past and those that are not—that offer an intergenerational story of how slavery has been central in shaping our nation's collective history, and ourselves…

A deeply researched and transporting exploration of the legacy of slavery and its imprint on centuries of American history, How the Word Is Passed illustrates how some of our country's most essential stories are hidden in plain view—whether in places we might drive by on our way to work, holidays such as Juneteenth, or entire neighborhoods like downtown Manhattan, where the brutal history of the trade in enslaved men, women, and children has been deeply imprinted.

Informed by scholarship and brought to life by the story of people living today, Smith's debut work of nonfiction is a landmark of reflection and insight that offers a new understanding of the hopeful role that memory and history can play in making sense of our country and how it has come to be.”
—Little Brown and Company

How the South Won the Civil War: Oligarchy, Democracy, and the Continuing Fight for the Soul of America
By Heather Cox Richardson

Staff comment: "How the South Won the Civil War takes a deep dive into our nation's founding paradox and how it continues to shape our current dilemmas. Richardson traces the ideal that 'all men are created equal' with the reality of how power has accumulated in the hands of a few who then actively work against the ideals of equality and self-determination." —Jeremy Nesoff, Director of District Partnerships 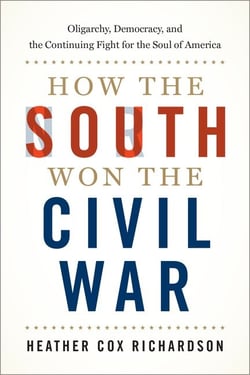 From the publisher: “While the North prevailed in the Civil War, ending slavery and giving the country a new birth of freedom, Heather Cox Richardson argues in this provocative work that democracy's blood-soaked victory was ephemeral. The system that had sustained the defeated South moved westward and there established a foothold.

It was a natural fit. Settlers from the East had for decades been pushing into the West, where the seizure of Mexican lands at the end of the Mexican-American War and treatment of Native Americans cemented racial hierarchies. The South and West equally depended on extractive industries-cotton in the former and mining, cattle, and oil in the latter-giving rise a new birth of white male oligarchy, despite the guarantees provided by the 13th, 14th, and 15th Amendments, and the economic opportunities afforded by expansion.

To reveal why this happened, How the South Won the Civil War traces the story of the American paradox, the competing claims of equality and subordination woven into the nation's fabric and identity… Richardson's searing book seizes upon the soul of the country and its ongoing struggle to provide equal opportunity to all. Debunking the myth that the Civil War released the nation from the grip of oligarchy, expunging the sins of the Founding, it reveals how and why the Old South not only survived in the West, but thrived.” —Oxford University Press

Staff comment: “A pleasure to read all the way through or dip into and out of as the spirit moves you!”
—Alison Feldman, Director of Foundation of Relations

From the publisher: “The story begins in 1619—a year before the Mayflower—when the White Lion disgorges ‘some 20-and-odd Negroes’ onto the shores of Virginia, inaugurating the African presence in what would become the United States.

It takes us to the present, when African Americans, descendants of those on the White Lion and a thousand other routes to this country, continue a journey defined by inhuman oppression, visionary struggles, stunning achievements, and millions of ordinary lives passing through extraordinary history.

Four Hundred Souls is a unique one-volume ‘community’ history of African Americans. The editors, Ibram X. Kendi and Keisha N. Blain, have assembled ninety brilliant writers, each of whom takes on a five-year period of that four-hundred-year span. The writers explore their periods through a variety of techniques: historical essays, short stories, personal vignettes, and fiery polemics.

They approach history from various perspectives: through the eyes of towering historical icons or the untold stories of ordinary people; through places, laws, and objects. While themes of resistance and struggle, of hope and reinvention, course through the book, this collection of diverse pieces from ninety different minds, reflecting ninety different perspectives, fundamentally deconstructs the idea that Africans in America are a monolith—instead it unlocks the startling range of experiences and ideas that have always existed within the community of Blackness.

This is a history that illuminates our past and gives us new ways of thinking about our future, written by the most vital and essential voices of our present.” —One World

You Are Your Best Thing: Vulnerability, Shame Resilience, and the Black Experience
Eds. Tarana Burke and Brene Brown Staff comment: "I could not put this down and I recommend the audio version so you can hear the authors read their vignettes."
—Pamela Donaldson, Associate Director for Diversity and Inclusion

“This has been affirming, critical, and life-giving.”
—Dr. Erika Henderson, Associate Program Director for Regional Growth

From the publisher: “It started as a text between two friends. Tarana Burke, founder of the 'me too.' Movement, texted researcher and writer Brené Brown to see if she was free to jump on a call… Burke and Brown are the perfect pair to usher in this stark, potent collection of essays on Black shame and healing. Along with the anthology contributors, they create a space to recognize and process the trauma of white supremacy, a space to be vulnerable and affirm the fullness of Black love and Black life.” —Random House 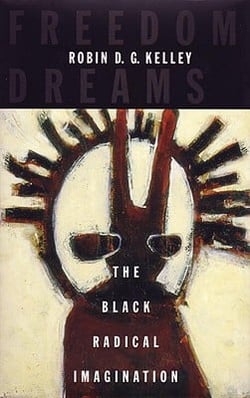 Staff comment: “This is...one of my all-time favorites from Robin D.G. Kelley. The book highlights the Black radical imagination throughout the 20th century and emphasizes the importance of naming and ‘dreaming’ the world we want, rather than just offering critiques of the world we don't.” —Rachel Johnson, Curriculum Developer

From the publisher: “Kelley unearths freedom dreams in this exciting history of renegade intellectuals and artists of the African diaspora in the twentieth century. Focusing on the visions of activists from C. L. R. James to Aime Cesaire and Malcolm X, Kelley writes of the hope that Communism offered, the mindscapes of Surrealism, the transformative potential of radical feminism, and of the four-hundred-year-old dream of reparations for slavery and Jim Crow. From ‘the preeminent historian of black popular culture' (Cornel West), an inspiring work on the power of imagination to transform society.”
—Beacon Press

Begin Again: James Baldwin’s America and Its Urgent Lessons for Our Own
By Eddie S. Glaude Jr. Staff comment: "Glaude draws on James Baldwin’s writing and thinking, his life, and his example. He asks us to imagine what it will require of each of us to do this work and whether we are prepared for what is, among other things, a profoundly moral challenge."
— Dr. Karen Murphy, Director of International Strategy

From the publisher: “Begin Again is one of the great books on James Baldwin and a powerful reckoning with America's ongoing failure to confront the lies it tells itself about race. Just as in Baldwin's ‘after times,’ argues Eddie S. Glaude Jr., when white Americans met the civil rights movement's call for truth and justice with blind rage and the murders of movement leaders, so in our moment were the Obama presidency and the birth of Black Lives Matter answered with the ascendance of Trump and the violent resurgence of white nationalism.

In these brilliant and stirring pages, Glaude finds hope and guidance in Baldwin as he mixes biography—drawn partially from newly uncovered Baldwin interviews—with history, memoir, and poignant analysis of our current moment to reveal the painful cycle of Black resistance and white retrenchment. As Glaude bears witness to the difficult truth of racism's continued grip on the national soul, Begin Again is a searing exploration of the tangled web of race, trauma, and memory, and a powerful interrogation of what we must ask of ourselves in order to call forth a new America.”
—Crown Publishing Group

Facing History and Ourselves invites you to use our featured collection The Reconstruction Era and the Fragility of Democracy.