We're thrilled to partner with The Allstate Foundation to host Bryan Stevenson, founder and Executive Director of the Equal Justice Initiative, for two events this week as part of our national Community Conversation series. And we are excited to bring these events to audiences all over the world! Read on for two ways you can tune in: 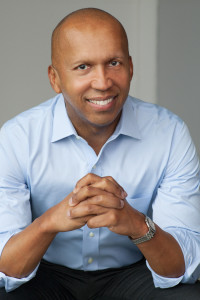 An attorney, human rights activist, and author, Bryan Stevenson is a MacArthur fellow and founder of the Equal Justice Initiative. Stevenson is one of the country's most visionary legal thinkers and social justice advocates, and a leader in the movement to fight mass incarceration in the United States. President Barack Obama recently appointed Stevenson to the Presidential Task Force on 21st Century Policing.

In his memoir, Just Mercy, Stevenson recalls his experiences as a young lawyer advocating for justice and fighting against extreme punishments in an unbalanced criminal justice system. The stories he tells are heartbreaking, yet inspiring, and motivate audiences to take action and make changes in their own lives.

Bryan Stevenson is an example of how everyday people can make courageous choices to build strong and inclusive communities.

2015 marks a decade of partnership between Facing History and Ourselves and The Allstate Foundation. Over the past 10 years, together we have held over 100 Community Conversations in 10 cities, engaging more than 70,000 teachers, parents, and community members in meaningful dialogue about today's most profound issues, including respecting diversity, promoting tolerance, and creating social change. Find an upcoming Community Conversation near you.