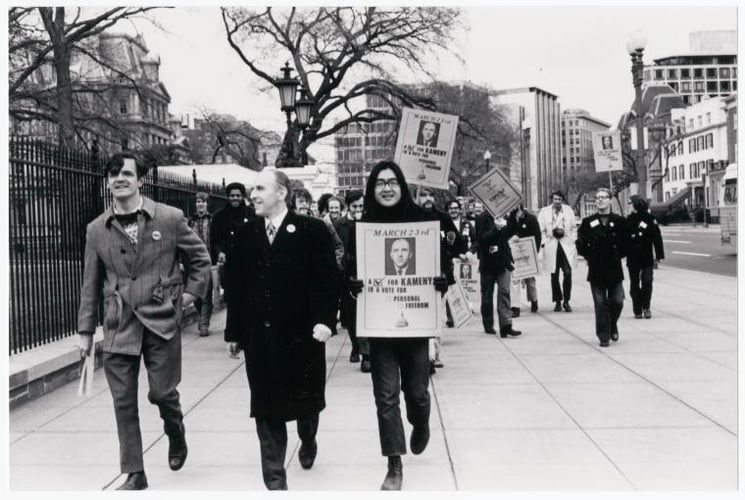 As a video producer at Facing History and Ourselves, I’ve had the privilege of documenting some fascinating and valuable histories over the past five years. Many of these afforded me a perspective-shifting opportunity to see the world through the eyes of others, but none taught me as much about myself as my recent work on LGBTQ history in the United States.

The goal was to create video-based curricular resources to help teachers explore this history with their students, but in order to reach it, I needed to look inward. I tried to think back to the gaps in my own high school education, weighing the effects of what my teachers either feared including or were forced to leave out.

Could a well-facilitated discussion in my history class during a time when I was trying to make sense of my sexual identity have made me feel safer amongst my peers? Would learning gay history have changed the way many of my classmates used the word “gay” as a casual insult?

I couldn’t answer these questions with certainty, but I knew that I made it all the way through college without learning much, if any, LGBTQ history, and that most of my peers did, too. Years later, here was my chance to make sure a new generation of Facing History students wouldn’t be left asking themselves the same questions. And as a gay filmmaker, I felt like I already knew the broad strokes of what we needed to cover. This was, after all, my history.

When I finally started researching, though, I found that I knew a lot less than I expected; in actuality, I would go as far as to call myself ignorant.

I had never even heard of the lavender scare, a gay witch hunt in the United States government that coincided with the better-known red scare in the early 1950s. These anti-gay and anti-communist campaigns often worked together; United States Senator Joseph McCarthy conflated homosexuality with Communism, and by extension, with mental illness and perversion. By 1953, his fearmongering attack on queer people caused President Dwight D. Eisenhower to sign Executive Order 10450, which barred homosexuals from serving in the Federal government and the military until its repeal in 1995.

I had seen this conflation of “dangerous” identities with “dangerous” ideas echoed in other periods in history, with disastrous results. The lavender scare was a perfect case study to teach students the dangers of fearing and demonizing the “other,” or the unknown, in political discourses, and in doing so, help them understand the marginalization of LGBTQ people in the United States.

Perhaps more importantly, I saw that this history could empower students because there were unsung heroes hiding within it. Frank Kameny, an astronomer for the United States Army who was dismissed for his homosexuality in 1957, organized a picket line at the White House in partnership with early lesbian activist Barbara Gittings in 1965. The protest rallied other homophile activists and expanded to the United Nations, Pentagon, and Philadelphia’s Independence Hall. It led to a recurring gathering known as the Annual Reminder for gay rights.

As I looked at photographs of Kameny, Gittings, and their comrades picketing, heads held high with signs demanding rights of full citizenship, I felt a rush of pride. These were brave men and women boldly standing up to injustice, the very definition of what Facing History calls “upstanders.” Without their actions, LGBTQ people would not have made such great legal and social gains in the last half century.

Suddenly, I was struck with a question I had not yet considered: What if my high school reference point for homosexuality was an inspiring historical figure like Frank Kameny?

A common criticism of United States LGBTQ youth is that they don’t appreciate the sacrifices their forebears made for them; that in today’s world, where queer identities enjoy better media representation and better legal protection than ever before, young people have disconnected from a history fraught with hardships.

If it is true that queer people do not “know their history,” though, it likely isn’t because they lack appreciation, but that, like me, they were never given the opportunity to learn it in the first place. And though the LGBTQ community has made progress since I was in school, there are still lonely, scared kids in classrooms all over the world today looking for someone to understand them, set an example for them, and to make them feel safe.

So, for LGBTQ History Month, I encourage educators: Look for the people missing from the histories you teach, and have the difficult conversations that bring those people into your students’ lives. The next Frank Kameny or Barbara Gittings could be sitting in your classroom, but they may not find themselves without you.

Facing History's work on LGBTQ history in the United States and the lavender scare is generously funded by the Gill Foundation. Look for teaching resources on this history in January 2017. In the meantime, check out books, DVDs, and other resources from our lending library that explore LGBTQ history.

Rob Tokanel is a video producer for Facing History and Ourselves.
At Facing History and Ourselves, we value conversation—in classrooms, in our professional development for educators, and online. When you comment on Facing Today, you're engaging with our worldwide community of learners, so please take care that your contributions are constructive, civil, and advance the conversation.