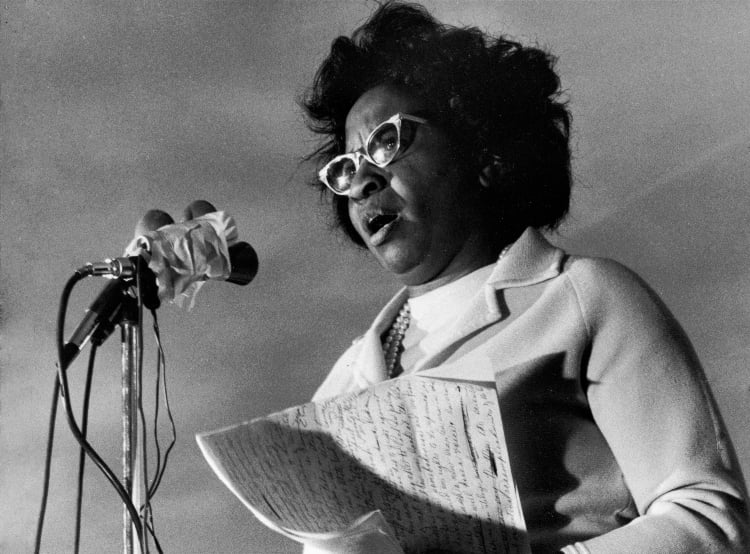 In a recent interview, I spoke with Dr. Karlos Hill concerning the life and legacy of educator-activist Clara Luper. Dr. Hill is Associate Professor and Chair of the Clara Luper Department of African and African American Studies at the University of Oklahoma where he teaches the history of racial violence in the U.S. He serves on the Facing History and Ourselves Board of Scholars. He is the author of Beyond the Rope: The Impact of Lynching on Black Culture and Memory, The Murder of Emmett Till: A Graphic History, as well as a forthcoming book entitled The Tulsa Race Massacre: A Photographic History. In 2023, Dr. Hill plans to publish a new edition of Clara Luper’s memoir Behold the Walls that chronicles the Oklahoma City Sit-In Movement. In this interview, we discuss the history of the Oklahoma City Sit-Ins and Clara Luper’s approach to teaching as an educator-activist. Luper was a history teacher at Dunjee High School in 1957 when she became an adviser to the Oklahoma City NAACP’s Youth Council. In that role, she helped to spark a desegregation movement that would sweep the country.

KS: I understand that your department at the University of Oklahoma was recently named for Clara Luper. Can you speak to some of the forces that inspired that decision and how you engage her legacy as a department?

KH: In coming to Oklahoma and joining the department in 2016, I learned that Clara Luper was a graduate of the University of Oklahoma and is considered to be the mother of the Civil Rights Movement in Oklahoma. As Chair at the time, I was trying to figure out how to make it clear that our department centers community engagement and in 2018, I caught wind of the fact that it would soon be the 60th anniversary of Clara Luper and the Oklahoma City Sit-ins. My colleagues as well as the Dean of Arts and Sciences at OU were able to convince the university administration that renaming the department for her would be a great thing for our department and the university.

KS: Can you speak a little bit about the Oklahoma City Sit-ins, one of the first lunch counter sit-ins of the Civil Rights Movement?

KH: The Wichita Sit-in and especially the Oklahoma City Sit-in were motivated by the success of the Birmingham Bus Boycott. That was really powerful encouragement for black people to move beyond legalism as a method of gaining rights and move toward direct action. There are things that we can do as a community and that can involve regular people, not just lawyers. Clara Luper, along with the NAACP Youth Council, are inspired by the Birmingham example and buoyed by the Brown v. Board of Education decision that desegregates education. Clara Luper and members of the NAACP Youth Council traveled to New York City to perform a play entitled Brother President that features the activism of Dr. Martin Luther King put on a play for their president as well as to attend the NAACP national meeting in 1958. En route to New York City, they take a northern route and, for the first time, are able to visit and patronize restaurants without being segregated. And this so excited them that they could actually be served at a restaurant and be treated with dignity.

On the way back from New York City, they take a southern route and experienced the same segregation that they experienced in Oklahoma and decided on that trip that they would not be complicit in their segregation anymore. They decided that they would sit in to eradicate segregation in Oklahoma and particularly in restaurants. Ultimately, Marilyn Luper, Clara Luper, and twelve others went downtown Oklahoma City to desegregate the Katz Drug Store on August 19th, 1958. They sat down and demanded to be served. Though they were denied service And so two days following the initial sit-in, Katz Drug Store decided to desegregate not just their store and their lunch counter in Oklahoma City, but all of their fifty stores located across Oklahoma, Kansas, and other parts of the Midwest. And so this is one of the early, significant victories of the sit-in movement.

KS: Given the dual commitment to teaching and community engagement that you are centering in your department, are there particular approaches that Luper exhibited that inspire you?

KH: Certainly what we're trying to do as a department is to figure out how to actualize her vision for education...for the scholar-activist and the citizen-activist. I think in listening to video footage of Clara Luper and just talking to her students, she was someone devoted to making positive change in society and she was a teacher, but her real work was trying to create change in the lives of young people first. I think Clara Luper was, first and foremost, about teaching students how to demand the very best of themselves and live up to those demands and expectations. There are stories that her students tell about her correcting their English, about her demanding that they not say "um" and "ah" when they spoke, but speak very clearly and decisively.

She lived in an era when black people were seen as inferior and were made to be inferior so demanding that they exude excellence at all times in everything that they did, their appearance, their diction, how they walked, and how they comported themselves is something that then allowed her to challenge students to do things that we don't normally ask students to do: to ask students to essentially put their lives on the line and ask their parents to allow their children put their lives on the line. All of this was possible because she has such high demands for them as individuals.

I think as educators, we can sometimes think that we don't want to push students too hard and we don't want to turn students off by being very demanding. We want to create these comfortable settings where no one is seemingly put out or made to be uncomfortable. But I think the reason why they remember her is because she demanded excellence and because she demanded excellence, they wanted to meet the high standards she set for them. They wanted to prove to her that they could rise to that level and everything flowed from there.

Facing History and Ourselves invites you to stream Eyes on the Prize: America’s Civil Rights Movement and incorporate it into your lesson plans for the upcoming school year. Access the film and a wealth of planning resources all for free via our virtual library.

PHOTO: Clara Luper announces her candidacy for the U.S. Senate at a rally on Oklahoma City's east side on November 16, 1971 (AP Photo).