Home > Our Blogs > Facing Today > The Making of Defying the Nazis: The Sharps' War

The Making of Defying the Nazis: The Sharps' War

Posted by Facing History and Ourselves on September 20, 2016

Facing History is the lead educational partner for the film, Defying the Nazis: The Sharps’ War. Learn more about how this documentary became a lifelong journey for filmmaker Artemis Joukowsky, III.

Make sure to catch the premiere tonight on PBS. The film will be available for streaming for two weeks following the premiere. 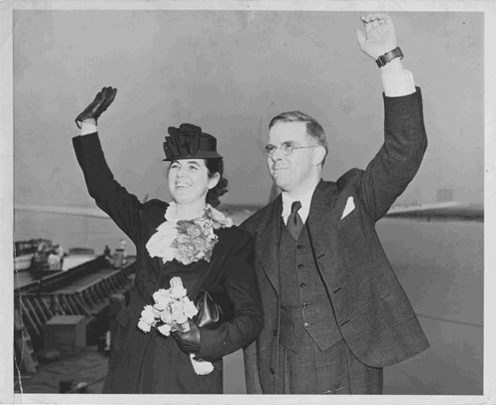 For Artemis Joukowsky III, his film, Defying the Nazis: The Sharps’ War, was born out of a simple ninth grade homework assignment.

“Interview someone of moral courage,” Joukowsky recalls. “That was the assignment.”

But the young Joukowsky was perplexed by the idea of “moral courage,” so he went home and asked his mother what to do. She suggested he interview his grandmother, Martha Sharp.

It turns out she and her husband, Waitstill, did a lot: They saved over 2,000 people in Europe – mainly children and Jews – during two rescue missions in 1939 and 1940.

"This had never come up before,” said Joukowsky about his grandparents. “It had never been discussed.”

He spoke to his grandmother for his class assignment and it turned into a lifelong search to uncover his incredible family story of rescue during the Holocaust. When she died in 1999, he discovered boxes of her materials – documents, letters, and case files of the people she helped rescue. This provided him with enough fodder to begin making a film, which would become Defying the Nazis.

The film is an intimate documentary of his grandparents’ story, detailing the couple’s courageous and difficult decision to be upstanders during a time of uncertainty. They received a request from the American Unitarian Association to travel to Europe to help rescue people being targeted by the Nazis. The Sharps weighed the factors at play. As Unitarians, they believed that everyone should have the freedom of thought and religion. But they had two young children who were three and eight years old. Their hesitation increased when they learned that they were not the association’s first choice to lead the mission. Seventeen couples before them had said no to the request. But ultimately, they decided to go. Leaving their children behind they travelled to Prague, arriving less than one month before the Nazis occupied the country.

In his research efforts for the film, Joukowsky began tracking down the people who survived as a result of his grandparents’ actions. As his work progressed, the collection of historical documents related to their rescue efforts grew. The documents – 1,200 and counting – piece together an intricate and often untold history of American involvement during World War II.

The archives are now housed at the United States Holocaust Memorial Museum in Washington, D.C. In 2006, the Sharps were honored as “Righteous Among the Nations” at Yad Vashem, the Holocaust remembrance organization located in Israel. The designation is an honor bestowed upon non-Jews who saved Jewish lives during the Holocaust. Since the 1960s the title has been awarded to some 22,000 people from over 30 countries – and of those, only five (including the Sharps) are American.

The same year that his grandparents’ memory was honored in Israel, Joukowsky discovered Facing History. His daughter Alexandra was reading the Facing History and Ourselves: Holocaust and Human Behavior resource book in her eighth grade social studies class.

“I read along with her and just fell in love with it,” said Joukowsky. “The work Facing History does to blend the historical with the personal – to start with the idea that all of us are upstanders and all of us are bystanders, that all of us are perpetrators and probably all of us have been victims – that is the most effective way to do it. And it speaks directly to the Sharps’ story.”

He hopes the film is an inspiration for people young and old to stand up for their beliefs.

“If young people are exposed to this type of story early, we can talk about the Holocaust in a very different way, ”Joukowsky said. “The legacy of this story is that anyone can help. Just because the Red Cross is there, or the United States government is sending troops somewhere, and you’re just an ordinary person, that doesn’t mean there is nothing you can do. There are so many various ways to provide help.”

And he is quick to point out that upstander behavior does not mean risking your life or becoming a “hero.”

“There are many Martha and Waitstill Sharps today,” Joukowsky said. “So part of taking action is thinking about, ‘Who are they?’ and, ‘How can we help them to be more successful?’”

Watch the trailer for Defying the Nazis: The Sharps’ War. You can also watch recent panel discussions on the film, which took place at the White House and the U.S. Holocaust Memorial Museum. Teachers, you can find Facing History lessons to help bring the film into your classroom here.

Don’t forget to catch the September 20 premiere on PBS!