Home > Our Blogs > Facing Today > This is America, Speak English

This is America, Speak English

Posted by Julia Rappaport on September 10, 2013

Facing History in New York, in partnership with WNYC Radio’s Radio Rookies program, helps public high school students develop digital storytelling skills through the Neighborhood to Neighborhood project. Each year, students in the program tackle complex questions about identity, race, education, and crime and violence in their communities. Using interviewing skills and multimedia tools, the students produce original visual and audio pieces. This post is the fifth in a five-part series introducing their finished pieces. Each post includes connection questions you can use in your classroom to discuss the works or to start your own project. This week: two friends look at the "English-only" movement. Psst...though this series is wrapping up, be sure to check back next week for a peek at how to make a DIY radio piece on your own or with students!

Facing History students Sam and Sydne both grew up in New York City and are used to hearing the diverse mix of language that makes up the city’s fabric.

The broad array of languages spoken in their communities has never bothered Sam (who speaks Spanish with her parents) or Sydne, which is why they have become alarmed about the “English-only” movement and people who express anger over having to "Push 1 for English” on automated phone calls. But when some people in their own school and even families express a similar sentiment, they decide to dig a little deeper. 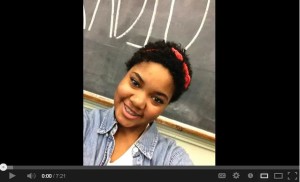 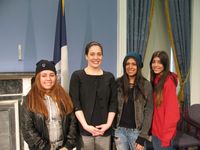 The Neighborhood to Neighborhood Project was made possible by the Hive Digital Media Learning Fund in The New York Community Trust and The MacArthur Foundation.

Check out the rest of the "Neighborhood to Neighborhood" blog series!