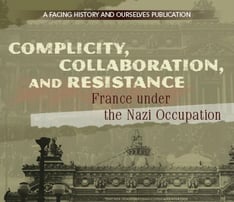 licity, Collaboration and Resistance: France under the Nazi Occupation, uses France as a case study to sort through how those individual and collective choices contributed to the Holocaust. Written by Columbia University Professor, Clemence Boulouque, this resource provides diary entries, letters, memoirs, and documents that bring readers into the lives of ordinary French people - both Jews and non-Jews - under the Nazi occupation. It uses these rich testimonies to highlight the complexities of daily decision-making that individuals from all walks of life faced.

Often there are two stories told about France during this time period. One is the story of the French resistance fighting against the Nazis. The other is of collaboration with the Nazis through the Vichy Regime, which helped the Nazis deport 76,000 of France’s Jews during the war. When you look closely at the details, neither story accurately represents life in France under the Nazi occupation.

That’s the intrigue of dissecting this part of France’s history and how it fits into the overall history of the Holocaust. There was not one France under the occupation, but several. There was no one, single experience of life during those years, but millions of them, and each choice that was made was shaped by the particular circumstances of the moment. What factors influenced the choices that they made? What were the consequences of the actions that they took? France’s recent decision to open archives from the Vichy regime to the public will no doubt raise even more questions while the country still grapples with a long, difficult reckoning of its history during World War II.

France provides just one example of these complexities. Each nation, each city, each individual has its own story that begs to be explored in-depth. As we mark another year to commemorate those who were lost and honor those who survived the Holocaust, there is value in the opportunity to reflect on the questions this history raises about guilt, responsibility, courage, and compassion.