Universal Lessons of the Holocaust in Today's World

Thirty-eight years ago, I was part of writing Facing History’s first edition of Holocaust and Human Behavior. It was a different time then. Holocaust education was minimal and what was taught tended to focus only on the concentration camps and the victimization of Jews and other “undesirable” groups. Students would often respond with the sentiment of, “What happened was horrible but what has that got to do with me? I can’t change the past.” That’s why I knew Facing History was onto something with Holocaust and Human Behavior all those years ago.

Beyond discussing the horrifying events of this history, Holocaust and Human Behavior gave young people the vocabulary and framework they needed to understand that the past—even something as extreme as the Holocaust—was the consequence of choices made by individuals and groups. Then it drew connections to the choices they face and make today. And it offered teachers the tools and support for this approach in the classroom, giving them the confidence to tackle topics typically deemed too difficult.

The Holocaust was not just a particular set of circumstances with a particular group of persecuted people. Instead, it encompassed one of the most exemplary histories of what happens when a democracy falls apart from the indifference of its citizens to the world around them. Continuing to understand the complexity of this time period sheds light on the agency we have in our own lives. 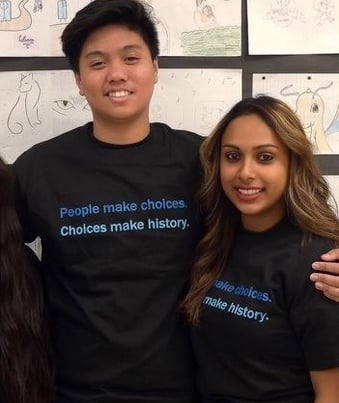 That agency extends to addressing today's global issues: from the refugee crisis in Syria, to the fears stoked by increased Muslim immigration in Europe, to instances of growing antisemitism, to violations of human rights in African countries. And it also extends to young people’s choices in their everyday lives—whether it’s the choice to stand up to or to join in when a peer is being bullied or to welcome that new student to the class or let them sit alone at lunch in the cafeteria.

While the Holocaust is far more likely to now be a staple of history courses, it’s the universality of its lessons that ring true more than ever: democracy is as fragile today as it has ever been. It is painfully clear that the issues of racial and religious bigotry and the need for responsible civic participation, which drove our founding work, continue to persist in our country and our world.

We’re at a pivotal point in the world right now. There is heightened tension, rampant disagreement and polarization, and frankly, confusion about what the future holds. But if there’s anything we can learn from history—any history—it’s that it is not inevitable. Past events are the culmination of a series of ongoing choices (or lack of choosing) at every level of society. Let’s use this time of uncertainty to emphasize to young people that their choices matter.

These conversations can be hard for both students and teachers so let us help you bring them into the classroom. Join Facing History staff and teachers from around the world for our free upcoming webinar series on Holocaust and Human Behavior: "Teaching the Rise of the Nazis Through Images" on May 17; "New Films to Explore the Holocaust and Human Behavior" on May 24; and "Explore the Legacy of the Holocaust Today" on May 31.

Martin Sleeper is Special Advisor to the President at Facing History and Ourselves. His undergraduate degree is from Willams College in History and he holds masters’ and doctoral degrees in teaching and curriculum development from the Harvard University Graduate School of Education. He has extensive experience in teaching at the secondary and college levels as well as in curriculum design and museum education. From 1979–2000 he was the principal of the John D. Runkle School in Brookline, Massachusetts. He is also the author of numerous articles on history education and adolescent development.
At Facing History and Ourselves, we value conversation—in classrooms, in our professional development for educators, and online. When you comment on Facing Today, you're engaging with our worldwide community of learners, so please take care that your contributions are constructive, civil, and advance the conversation.