Home > Our Blogs > Facing Today > What Do We Remember on Holocaust Remembrance Day? 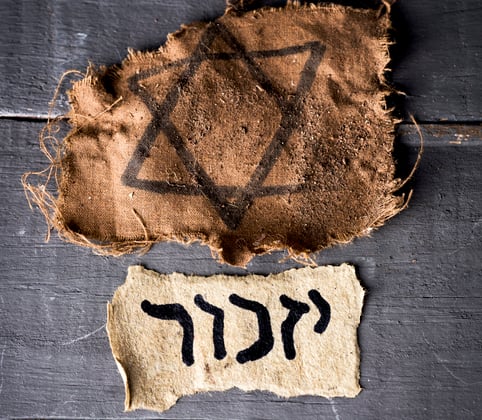 What does it mean to observe Holocaust Remembrance Day this year - at a time when the survivor generation is passing; when public knowledge about the Holocaust is minimal, especially among young people; and when we see a frightening rise in antisemitic attitudes, harassment, and violent crimes in our own schools and communities? What exactly should we be remembering, and what might those memories mean for our present moment?

Observing International Holocaust Remembrance Day on the anniversary of the liberation of Auschwitz reflects a pattern in public memory which identifies the Holocaust primarily with the death camps - a pattern which may actually limit the lessons we can learn from this history. As author Dara Horn points out in a provocative review of the New York Jewish Museum exhibit “Auschwitz: Not Long Ago, Not Far Away,” a fixation on the death camps may have the perverse effect of making “lesser” instances of antisemitism seem more tolerable: “Yes, everyone must learn about the Holocaust so as not to repeat it. But this has come to mean that anything short of the Holocaust is, well, not the Holocaust. The bar is rather high.” While the swastika drawn on a school desk, harassment in the streets, or even violent attacks are not indications of another Holocaust, we must never become numb to the damage these incidents have caused in the past or the present.

For me and my colleagues at Facing History, remembering the death camps’ systematic killing and vast suffering is critical; the words of Elie Wiesel, Primo Levi, Charlotte Delbo, and Hannah Lévy-Haas help us to confront this unfathomable human experience, one that was designed and carried out by “ordinary people.” But we believe that while studying the camps is a necessary part of remembering the Holocaust, it alone is not sufficient. If this history is to serve as a moral and civic education, students also need to learn from the period before Germany was a totalitarian dictatorship engaged in a world war, from a time when there was still scope for meaningful choices by ordinary citizens to choose a different outcome.

In our materials, the study of the Holocaust begins before the camps, before the beginning of World War II, and even before Hitler’s accession to power in 1933, with World War I and the 1920s, so that students can learn that feelings of national humiliation, cultural and economic dislocation, weak democratic institutions, and underlying antisemitism facilitated the rise of the Nazi party. We delve deeply into the history of the 1930s, so students can learn that Germany’s transformation from a democracy to a dictatorship did not happen overnight, but gradually. We use personal stories and accounts so that students can learn that conformity, fear, self-interest and indifference, along with antisemitism and beliefs in racial superiority, led Germans and others to conform, or actively consent, to the isolation, expulsion and murder of their neighbors. And we share stories like that of Emmanuel Ringelblum and the Oyneg Shabes group (powerfully told in the new film “Who Will Write Our History,” with a companion curriculum by Facing History), Jewish Partisans, and righteous neighbors and rescuers, to help students appreciate the agency, resistance, and resilience that were still possible in moments of crisis.

Facing History’s 44 years of work are grounded in a belief that engaging with this expansive history of the Holocaust can be transformative for learners. Yet the historical facts and the graphic warning from the Final Solution aren’t a one-shot antidote to hate and indifference. On Holocaust Remembrance Day, we should be aware that memory is distinct from history. As Rabbi Jonathan Sacks points out, “History is information. Memory, by contrast, is part of identity...Memory is the past as present, as it lives on in me.” We transform “information” into “memory” when we invite emotional engagement and ethical reflection into our classrooms and conversations, integrating an enlarged understanding of history and human behavior into our own awareness of ourselves and our society today. This memory can help us navigate our complex and often troubling present: recognizing small shifts in the climate of our communities, resisting the normalization of hateful words and actions, and responding with greater urgency and solidarity when our neighbors are targeted and our values are undermined. This isn’t just the task of teachers and students in our classrooms. It’s a responsibility we all share.

Facing History and Ourselves invites educators of adolescents to use our seminal case study, Holocaust and Human Behavior, and self-paced workshop for educators.