Home > Our Blogs > Facing Today > What Does it Mean to be American? 9 Quotes from Around the Country

What Does it Mean to be American? 9 Quotes from Around the Country

Posted by Facing History and Ourselves on February 27, 2018 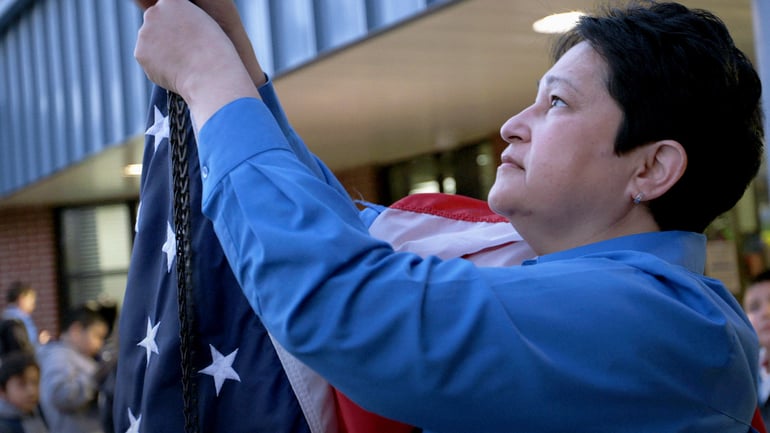 "What does it mean to be American?" is a timely question amidst the immigration debate but it's also one the United States has been struggling with for years. In 2014, New York Times reporter Damien Cave traveled the length of highway I-35, which runs south to north through the middle of the United States, for his “The Way North” project. Along the way, he asked 35 people this question. In 1997, the PBS documentary, A More Perfect Union, addressed the same issue. The complexity of these answers over time still resonates today.

What does it mean to be an American?: From "The Way North Project" in 2014

"Becoming American means following the rules. It means respecting your neighbors, in your own neighborhood." —Francine Sharp, 73, retired teacher in Kansas (born in Kansas)

"If you work hard, you get good things in life." —José, college student/roofer; immigrant without legal status in Tulsa, Oklahoma (born in Mexico)

"Being American is making a change and making good changes. Being American is being welcoming, being caring about other people, being proud of the country. And it’s forgiveness. It’s not holding grudges on anything—I mean, where’s that going to get you?" —Natalie Villafranca, 14, in Texas (born in Dallas)

"Being American means protection by the law. Anyone can say whatever they want and, even if I don’t agree with them, they’re still protected by the law it’s my job to enforce. That’s their freedom. That’s their right." —Sean Larkin, 40, sergeant with Tulsa Police Department’s gang unit in Tulsa, Oklahoma (born in Virginia)

"Being American is red, white, and blue and being free. It doesn’t matter what language you speak; if you’re born in America, you’re still American. No matter what you look like, no matter what." —Sebastien de la Cruz, 12, student who gained attention, and backlash, when he sang the national anthem during the 2013 NBA finals in a mariachi outfit (born and lives in San Antonio)

"I want all girls, especially girls of color, to know that they can be a part of science. And more than that, they can be leaders in science. I want them to know that, because I know that I am America. That I am science. I’m just the part that people refuse to recognize." —Taylor R., 13, speaking about her ambitions at the March for Science in April 2017

What does it mean to be American?: Excerpts from the documentary film, A More Perfect Union, in 1997

"Precisely because we are not a people held together by blood, no one knows who an American is except by what they believe. It's important that we do know our history, because our history is the source of our Americanness." —Historian Gordon Wood

"When people wrote 'All men are created equal,' they really meant men; but they didn't mean any other men except white men who owned land. That's what they meant. But because the ideas are powerful, there's no way that they could get away with holding to that. It's not possible when you have an idea that's as powerful and as revolutionary as a country founded on the idea that just because you're in the world, just because you're here, you have a right to certain things that are common to all humanity. That's really what we say in those documents. The idea that we begin the Constitution with, 'We, the People' . . . even though they didn't mean me! They had no idea I'd ever want to make a claim on that. And they'd have been horrified if they'd known that any of us would. But you can't let that powerful an idea out into the world without consequences." —Writer Rosemary Bray

"The American Dream has no meaning for me. What it was founded on, the Constitution and the Bill of Rights, in many ways I feel are used as billy clubs against minorities and cultural minorities, whether they be gay, or different in any way from the norm in this country. I, for example, don't think I'd like to go to California because of what I look like. I could be pulled over and carded, and I would have to prove my ancestry. And look how long my family has been in northern New Mexico. Ten to twelve generations!" —Vicente Martinez

This reading, which can be found in our unit, My Part of the Story, is also part of a new series of lessons for the documentary film, American Creed. In the film, former US Secretary of State Condoleezza Rice and Pulitzer Prize-winning historian David M. Kennedy come together to frame the stories of a wide range of  citizen-activists striving to realize their own visions of America’s promise across deep divides. One of those is Tegan Griffith, an American veteran from the midwest. Watch this two-minute clip of Tegan's story and tune in for the nationwide premiere of American Creed tonight at 9 p.m. ET/8 p.m. CT on PBS.