From over 400 nominations, we selected 20 finalists from around the world for the 2014 Facing History Together Teacher Recognition Contest. Then you voted for the educator whose story and work inspired you most.

Today we are so thrilled to introduce you to our 2014 Facing History Together Teacher Recognition Contest winner Hayden Frederick-Clarke, the founding math teacher at Diploma Plus, a small learning community at Charlestown High School in Boston, Massachusetts. Frederick-Clarke will receive a $5,000 teaching grant to benefit his school and community, and to further his work as a great educator. 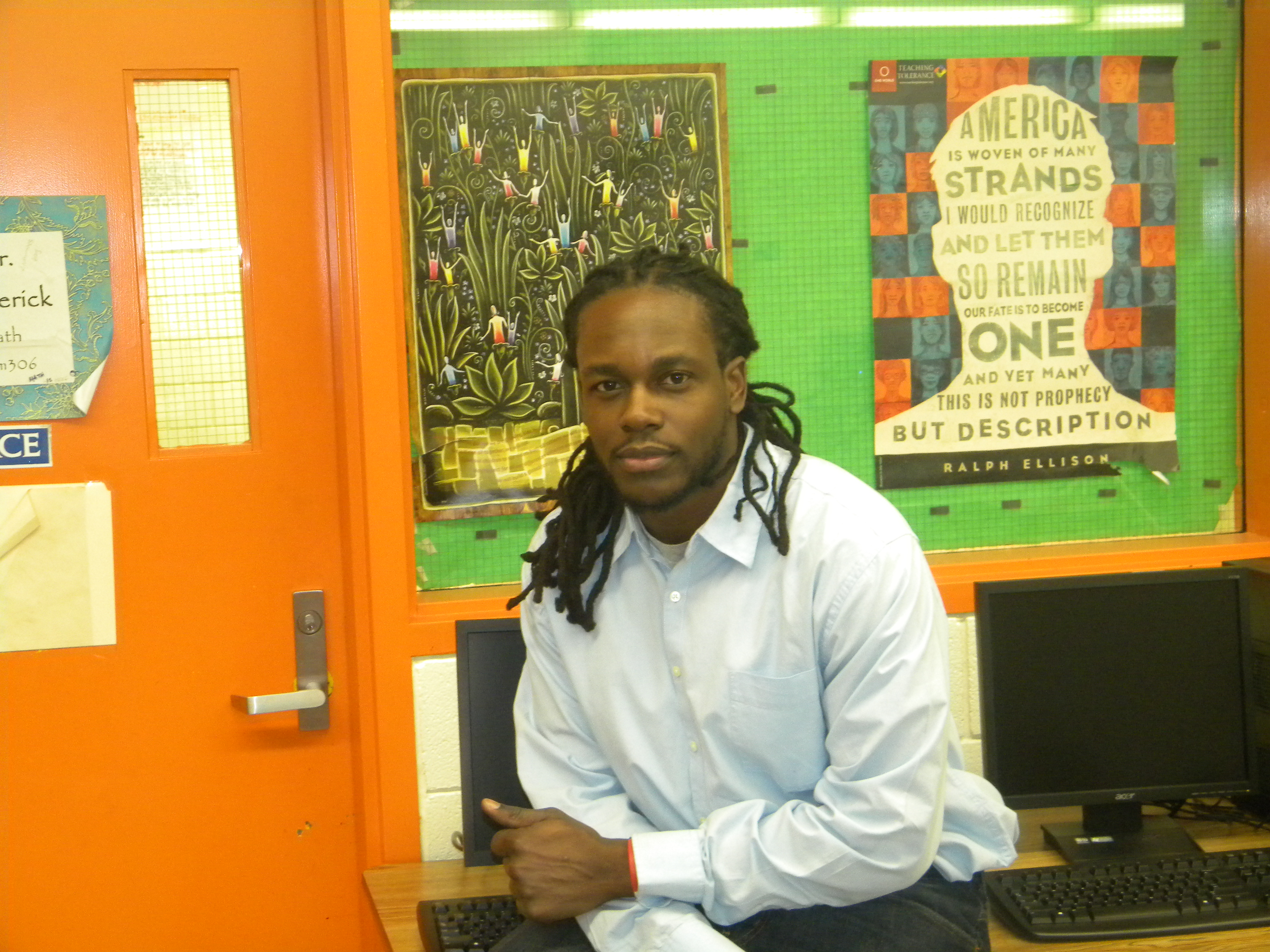 Many of his colleagues, students, and former students nominated him for the award.

"His vision for education seeks to build students who can be successful in any competitive environment, who are confident in every aspect of their identity, and who care about giving back to the community," wrote his coworker Natasha.

"Mr. Frederick was always a big advocate of how, although people were always different, they had one thing that held them in common," wrote a student, Nicole, "the fact that they were human."

We sat down with Frederick-Clarke shortly after he got the call.

Facing History and Ourselves: Congratulations, Mr. Frederick-Clarke! We heard that you were totally surprised to get the call that you had won the $5,000 grant from the 2014 Facing History Together Teacher Recognition Contest.

Hayden Frederick-Clarke: I was totally surprised. My director told me that we were expecting a phone call about an invitation to an event for a guest speaker who had come in earlier in the year. We had just left class and people were gathered in our common area. We were going through the morning ritual and announcements. The call came [and it was not our speaker] and all the students started cheering, the staff started cheering, I just had to pause and go around in a big circle and give everybody hugs. It was sort of like the Grammys or something. [Laughs.]

The award celebrates educators who go above and beyond the call of duty—shaping responsible, global citizens and confronting injustice and hatred head on. Did you have any teachers growing up like this?

My teacher Joy Smith at Boston Latin Academy was one of the few African American teachers I had growing up. She was very up front and outspoken, very well-versed, hyperliterate, superbly educated, and very vocal about social phenomena, specifically racial and gender politics, oppression, and history. She really helped me to learn about my own identity.

And what about your role models? Who else besides your teachers inspired you?

Most of my friends from my old neighborhood tended to emulate the male figures in their lives, who at that point happened to be locked into the drug game. This was the '80s and '90s. Instead, I had my eldest brother. He's a doctor now, but at that point, when I was in high school, he was in college. I started patterning myself more and more after him as my friends were patterning themselves more and more after the male role models in their lives. Once I started teaching and was in front of children, I really understood how important that impact could be. I wanted to teach, initially, so that I could be a role model to young men from similar backgrounds as my own.

And are these the types of students you have today?

Diploma Plus is for high school students who are 16 years old or older, who are two years over age for their grade level, and who have few credits. Oftentimes our students are in gangs, have learning disabilities, behavioral issues, English as a second language issues, all sorts of reasons that they are not performing in the way we'd like to. At Diploma Plus, we invigorate these students with social justice and restorative justice practices, smaller class sizes, and more support. I teach math, but I address things that might not live in a traditional math curriculum. I talk to my students a lot both inside and outside of class. I find opportunities to have broad conversations with them. I have a willingness to pause or suspend class to address what are urgent messages and issues they are facing.

What advice do you have for teachers who share your goal of engaging, motivating, and inspiring young people?

I would say that you cannot adequately and sufficiently teach students that you do not know about. It pays to be well-informed and to make yourself a student of your students. If I were to pick up and move to Tibet tomorrow, let's say, it would be incumbent upon me to know that I don't know anything, to find as many people and as many texts as possible to help me understand the traditions, the cultures, the struggles, the aspirations, the historical perspectives. And at that moment that I started to develop that understanding—through conversation, reflection, and a ton of reading—in that moment I can start to hone my own philosophy for what I want for those particular students.

Do you have plans for how you'd like to use the grant money?

I really don't yet, but I have had this dream for awhile. Our school has a European Trip Club, and I would love for there to be an Africa Trip Club. I think it's critically important for students to see grandeur and history and philosophy and magnificence produced by people that share their ancestry.

Mr. Frederick-Clarke, thanks so much for your time, and again, congratulations on your award! Is there anything else you'd like to add before you get back to class?

I need to add my thank yous! First and foremost, my thanks go out to Sung-Joon Pai, my director and one of my mentors. He's won the informal award for being the most generous person that I know and the best leader that I've met. Betsy Roter was the first director of our Diploma Plus program and a tremendous support to me. She is infinitely humble, wise, insightful, and analytical to a point that has always challenged me to improve and to see things from multiple lenses. My team—my fellow colleagues, fellow Diploma Plus teachers. I could not be the character that I am or have as much influence if I didn't have their unwavering support, their echo, input, and their foot work—all the things that they do in order to make my job possible and pleasant. My mom, probably the biggest factor in who I am now. Her dogged insistence that I read everything I can get my hands on, her example of outspokenness, and her obsession with politics. My older brother Hughan for being my role model. To this day he's the guy that I aspire to be. He's who I try to pattern myself as. Finally, my partner Naima, for everything.