Home > Our Blogs > Facing Today > Behind the Essay: A Q&A with Student Contest Winner Cicada Scott

Behind the Essay: A Q&A with Student Contest Winner Cicada Scott 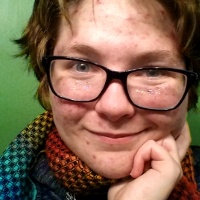 Cicada Scott, a senior from Manitou Springs, Colorado, received the $2,500 Benjamin B. Ferencz Upstander Award for the 2016 Facing History Together Student Essay Contest. To celebrate LGBT Pride Month in June, we go behind the scenes to learn more about what inspired Cicada to open up about being a non-binary gender teenager. Preferring pronouns like "them" and "they," Cicada describes non-binary as a "catchall category for people who are neither exclusively male or exclusively female."

After graduation, they plan to attend college at the University of Colorado, Boulder. They are looking into studying robotics but are still deciding the right major.

Did you have reservations about sharing something this personal so publicly? What did you hope others would take from your essay?

When I wrote it I only expected my teacher and the judges to read it so that took away any real fear of it going public. I was a bit nervous about the response when I did make it to the finalists, but it was short-lived. In the end, I'm happy that my message could spread so far. My hope was to open others' eyes to the issues that trans and gender non-conforming people face in today's world, because they often get swept under the rug and boiled down to debates on bathrooms and pronouns. I'd also hoped it would inspire people to do some of their own research, because I can't claim to be the only perspective on transphobia and it's hard to fit centuries of discrimination into 500 words!

Overwhelmingly positive! There are still people who stop me to tell me how much they loved the essay, and a lot of them have stories about the people they shared it with, which are always my favorite. However, most still describe me with the wrong pronouns or gendered language, so, in a way, not much has changed. People are still trying to define me with their terms instead of mine but it's also brought support from unexpected places and strengthened some bonds I already had. It had perfect timing as well because I was going through some rough times when I submitted it and knowing so many people were behind me really helped me through it.

What advice do you have for other transgender students who are grappling with some of the same issues as you?

First of all, you are valid. You are the only one who can dictate your identity. Secondly, make sure you have a hobby that's entirely unrelated to gender! It's very easy to frame ourselves entirely in terms of being trans, but if you can cultivate a section of your identity that has nothing to do with that then it does wonders for stress relief and self esteem.

What advice do you have for others who are trying to better understand what it means to be transgender?

Most importantly, don't assume! While it's often referred to as the transgender community, there's really not much unity at all. Trans activists are an excellent resource, but a lot of trans people don't appreciate being questioned, so Google is always an excellent backup. Be sure to listen more than you speak. And, finally, don't ask someone about their genitals! It's invasive.

What did entering this contest and writing this essay teach you about yourself?

It taught me to take myself seriously and that there's no shame in speaking out. It also taught me to write for a bigger audience than I'm expecting, because you never know when things might take off. I still wish I'd actually mentioned the term "non-binary" somewhere in my essay for people who are new to the subject. I'm taking these lessons, along with some newfound confidence, with me into the future. I'm not sure where this chapter of my life will take me, but whatever happens, I want more than anything to make a positive impact in the world around me.