Home > Our Blogs > Facing Today > Flexing Our Civic Muscles Together Against Antisemitism, Hatred, and Intolerance 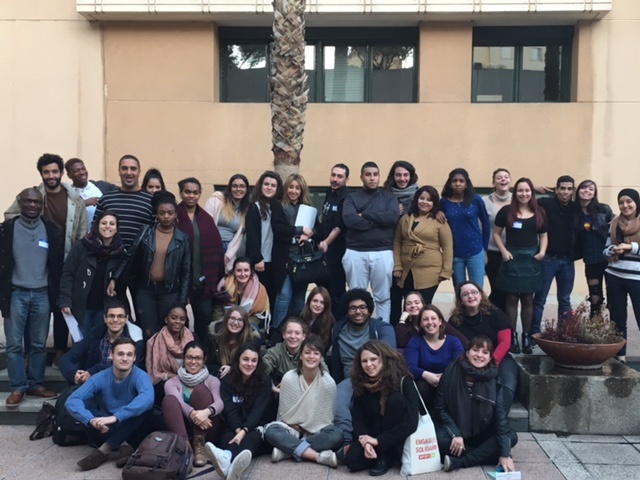 While the 2016 data is not out yet, 2015 was a horrific year in terms of identity-based hate. In the US alone, anti-Muslim crimes were up by 67 percent, antisemitic crimes rose by 9 percent, and anti-black crimes by 9 percent. What we do know for last year is that 1,094 bias-related incidents alone were recorded in the US between the day of the presidential election and December 16, 2016, according to the Southern Poverty Law Center. This year does not look promising thus far. One statistic already out for the US is that white supremacists have increased their recruiting on university campuses. This should give us pause.

Is identity-based hatred on the rise? We don’t know yet. We do know there appears to be greater comfort in expressing it, in bringing it out of the shadows. What was unimaginable—or, more accurately, clearly unacceptable—in post WWII Germany, France, and the US, to name only a few countries, has become more commonplace.

We might remind ourselves as we confront this hatred and violence that there have always been extremists, and identity-based hatred was never fully eradicated but individuals, communities, institutions, and nations working together, have created new norms, sought to protect human rights, and prevent and punish identity-based hatred and violence. The question is whether we intend to uphold those protections and remain committed to prevention. Individuals standing up and speaking out matter more than ever.

We know from those who study human behavior that stories of hatred and violence can be overwhelming, inspiring “psychic numbing” and even insensitivity. We also know that people are more likely to respond to a single story. We had that in mind when we developed a collection of resources on standing up to hatred and intolerance, focusing on stories of individuals such as Izzy Lenga, a victim of vicious antisemitic attacks and an upstander who made the hatred directed at her visible to others through social media, and Siavosh Derakhti, a young Swede who has dedicated himself to addressing antisemitism and xenophobia. His commitment to these issues began early. He saw his best friend bullied for being Jewish and he noticed a general lack of knowledge about the Holocaust in school. He set out to address the bullying and the ignorance. And now Derakhti is fostering greater awareness about other forms of hatred, including Islamophobia and xenophobia.

In 2016, Facing History partnered with Afev, an amazing network of university volunteers across France, to address racism, antisemistism, Islamophobia, and other forms of hatred. We use stories like those of Lenga’s and Derakhti’s to train Afev volunteers in Toulouse, Lyon, Marseille, and Paris. We have developed a program that provides the volunteers with the opportunity to wrestle with these issues themselves and to contemplate what it means to be ethical civic actors as volunteers and as citizens of France. Together, we explore the consequences of hatred, discrimination, and prejudice on individuals, communities, and countries. We examine how and why people like Lenga and Derakhti become upstanders; what we can learn from them; and how we can inspire others to speak out and stand up against hatred. And now, Afev volunteers are taking what they have learned to develop their own projects to encourage young people to become upstanders, to improve school climate, and to explore what it means to be a French citizen. As one volunteer stated, “Racism is still present, but upstanders are also there on a day-to-day basis. We have to sensitize people to become upstanders."

Efforts like these are vital. In a moment that feels fraught and chaotic, when democracies around the world, including that of the United States and France, feel vulnerable, flexing our civic muscles is more important than ever. It’s daily work for each and every one of us.

Here are two ways you can engage with other educators and young people in productive conversations about division and tolerance:


Photo Caption: Volunteers from Afev in Marseille, France working with Facing History and Ourselves.