Home > Our Blogs > Facing Today > Talking About Paris: Citizenship in the Face of Division, Fear, and Hatred

Talking About Paris: Citizenship in the Face of Division, Fear, and Hatred

Teaching after mass violence, including acts of terrorism, is incredibly challenging.


So many questions are raised by events such as the killing of 12 people in the violent attack at the satirical weekly newspaper Charlie Hebdo, or the murder of a policewoman, or the antisemitic attack that left four more dead: How do we as teachers help young people talk about free speech and its limits? How do we help young people to recognize and challenge dogma, to learn to question and engage multiple points of view without embracing relativism? How do we engage students about the role of government and civil society in protecting these freedoms in the face of hatred and fanaticism? And how do we teach about the brutal loss of those who were killed, their families, communities, and the nation that is grieving?

The events in France have inspired both deep sadness and soul searching worldwide. Following the murders of the cartoonists and editor at Charlie Hebdo, there was an outpouring of grief as well as a recommitment to the value of free speech. "Paris Est Charlie" (Paris is Charlie) lit up the Arc de Triomphe Friday; people filled the streets holding pencils in the air; and cartoonists worldwide created images in commemoration, mourning, and defiance.

Mourners gather on the Place de la République following the attacks at the "Charlie Hebdo" offices in Paris. Photo from Wikimedia Commons.

Amidst the sadness, some have wondered, aloud and in writing, about the French response. But of course it isn't only France that must confront deep and sometimes violent divisions based on identity, full membership, and representation. The United States grapples with a long history of racism and its legacies. The United Kingdom wrestles with its multicultural identity, with what constitutes "British values" in the face of religious and cultural diversity. And Germany faces some of the most intense antisemitic, anti-immigrant, and anti-Muslim activity in decades.

A common refrain in interviews since the attacks is the call for education—described in some places as a kind of tolerance education. Schools indeed can serve as critical spaces where we both intentionally and unintentionally teach what it means to be a citizen in our respective societies, where citizens develop, where students cultivate the attitudes, skills, and dispositions they will need to navigate life in societies that are increasingly complex. 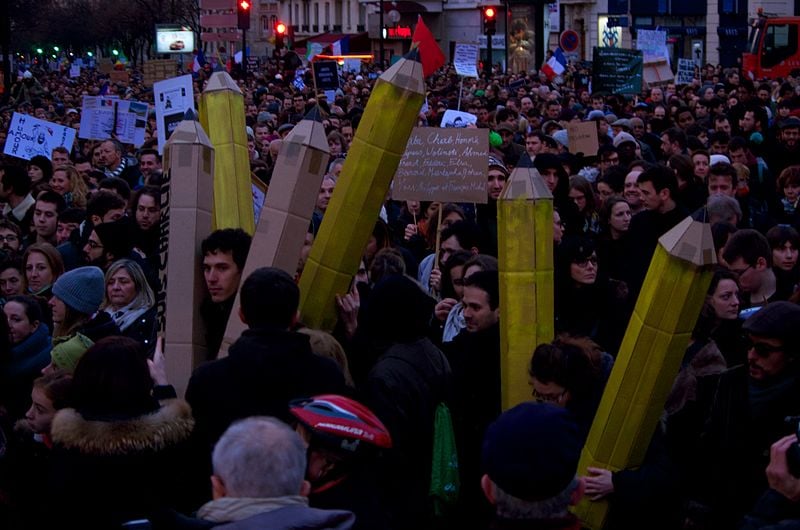 Marchers calling for peace and tolerance hold pencils in the air in a symbol of solidarity. Photo by Eric Walter, courtesy of Wikimedia Commons.

Charlie Hebdo exemplifies that complexity. Founded in 1969 during a period of restriction on free speech in France, the newspaper gained notoriety for its oftentimes crass cartoons. Charlie Hebdo offended and provoked, and no institution or individual was exempt. It was accused of antisemitism, Islamophobia, anti-Catholicism, and of perpetuating xenophobia. In the past few days, its critics have suggested that Charlie Hebdo often went too far. A deeper look—one that educators should discuss with their students—shows that Charlie Hebdo represents one of France's founding values—secularism—and one of its longest-held and finest traditions—satire. Educators and students should together explore the historical importance of rights of free speech; critical discussions should focus on how free, democratic societies determine what is acceptable speech not through violence, but by law, custom, social practice, and respect.

Two days after the Charlie Hebdo killings, a man associated with the attacks murdered four people at a kosher market, deepening the pain and confusion, and injecting antisemitism into the mix. Following the massacre, police called for one of Paris's central streets, the Rue des Rosiers in the historically Jewish neighborhood of the Marais, to close its shops and restaurants. And these events come on the heels of an increase in hate-motivated violence in the country. Just a month ago, a Jewish couple was attacked in Créteil, a commune in the southeastern suburbs of Paris. The woman was raped, and they were held because "Jewish people have money."

Students also need to learn that the citizens of Créteil, of all faiths, came out to protest and stand in solidarity, just as so many have decried current events. Around the world, the media is filled with commentary and questioning. Jews and Muslims alike are asking whether they are safe in France, if they have a future in a place that has been their home, in the face of hatred and extremism. Our students can and should learn the particularities that France faces: a desperate economic situation, as well as social divisions tied to a failure to integrate a growing population of French citizens who are Muslim and/or children and grandchildren of earlier waves of immigration from the Maghreb (northwestern Africa, east of Egypt) and the painful colonial history associated with this region and its legacies. Unfortunately, these tensions can feed the appeal of the far right, with its anti-immigrant, antisemitic, Islamophobic campaigns. 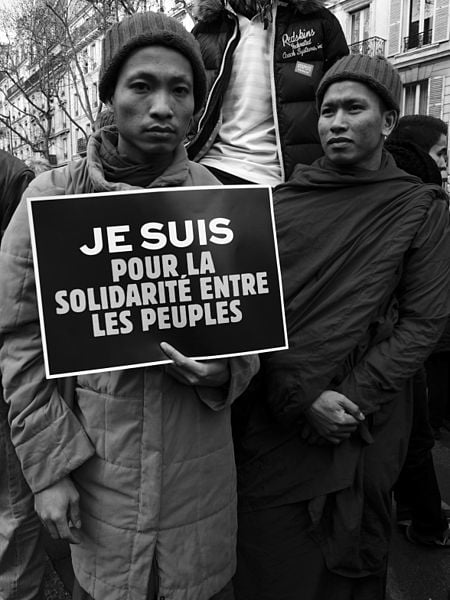 Parisians come together in support of the victims of the "Charlie Hebdo" shooting on January 11, 2015. Photo courtesy of Passion Leica, Wikimedia Commons.

Our responsibility as adult citizens is to create a safer world, one which will allow all young people, regardless of faith, color, class, or belief, to live, work, play, and learn together. We need to create learning communities filled with debate and discussion, where historical legacies and discussions of difference are faced—places where young people can practice and assert their developing citizenship.