Home > Our Blogs > Facing Today > Teaching in a Time of Terrorism 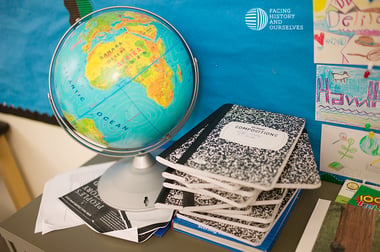 At the end of last year, we saw the publication of a number of lists of things that are more common than being a victim of a terrorist attack. They included prescription drug overdoses, car accidents, and lighting strikes. The lists were intended, in part, to create a sense of perspective. Indeed, terrorist attacks are rare, and they directly affect only a small number of people. But their impact and consequences are widespread. In countries around the world, terrorism has shaped security and policing, civil liberties, and the ways that people in diverse societies perceive and interact with each other.

Recent terrorist attacks have targeted the very places that symbolize the openness of an open society: a park, public transportation, a restaurant and a concert hall, a grocery story, a newspaper, a beach, a holiday party at a social services center. The location of these attacks, their brutality, and their frequency can understandably make us feel more vulnerable. This feeling is magnified by the relentless media coverage. Terrorism inspires fear. Fear can wake us up and also paralyze us. We can become numb to the violence and to the images of terror. We can begin to forget or shut out how it affects families, friendships, communities, and children.

Civil society requires an informed, empathic and engaged citizenry.  But that doesn’t just happen. It requires the development of particular skills and behaviors. The adolescents in our classrooms are members of our societies and emerging citizens. They need the opportunity to thoughtfully engage the questions and concerns that terrorism raises. They must be part of creating a culture of prevention and peace.

In light of this, the ideas below could inform your thinking about a lesson or help you make a connection in a Facing History class. No matter what lesson you decide to do, setting the context and developing a safe, reflective space for learning and discussion are important first steps.

Define terms: Don’t assume that there is a shared understanding of terrorism. Develop a working definition of terrorism and consult these sources to inform it.

Discuss stereotyping: in the wake of recent terrorist attacks, hate crimes and violence against Muslims has gone up. For example, a few days after the Paris attacks, a girl in New York was reportedly attacked by three boys who tried to remove the hijab she was wearing. They punched her and called her “ISIS.”  There has also been an increase in attacks against Sikhs intended against Muslims. Help students to explore the process of stereotyping and discuss the conflation of individuals with groups and Muslims with radical Islamists.

Explore a range of human behavior: the violence and brutality of terrorists illustrates perpetration and blind obedience. Students need to see that people also act with compassion and moral and civic courage, and think independently. Immediately following the attacks in Brussels, people around the city began opening their homes and places of work to strangers, using social media to spread the word. A baggage security worker in the Brussels airport applied the skills he learned as a Boy Scout to help the wounded people around him and he also carried people to safety. We do not want students to take physical risks, but we do want them to know that there are people who act in the face of inhumanity.

Explore how we balance civil liberties: this includes privacy, the role of the media, the transparency of the government, protections afforded to vulnerable communities, and free speech with safety and security.

Investigate peaceful negotiations: the ways that individuals, communities, and representatives of states have navigated their differences and established norms and processes for achieving justice. Examples of these include the Universal Declaration of Human Rights (UDHR), the International Criminal Court (ICC), and South Africa’s Truth and Reconciliation Commission.

Humanize the victims: Find a story of an individual life. Learn about the people who we lost.

Develop civic efficacy: Terrorism can make us feel powerless. It can also become the focus of a disproportionate amount of attention and resources. Adolescents need—we all need—to believe that we can make a positive difference in our societies and in the world, that what we do matters. And we need to remember that there are persistent challenges that demand our awareness and engagement. Explore ways that individuals and groups are making a positive difference. Take that knowledge and inspiration and help students apply it to something achievable.