Home > Our Blogs > Facing Today > Let's Address Racism in the Workplace, Just Like We Do in Schools 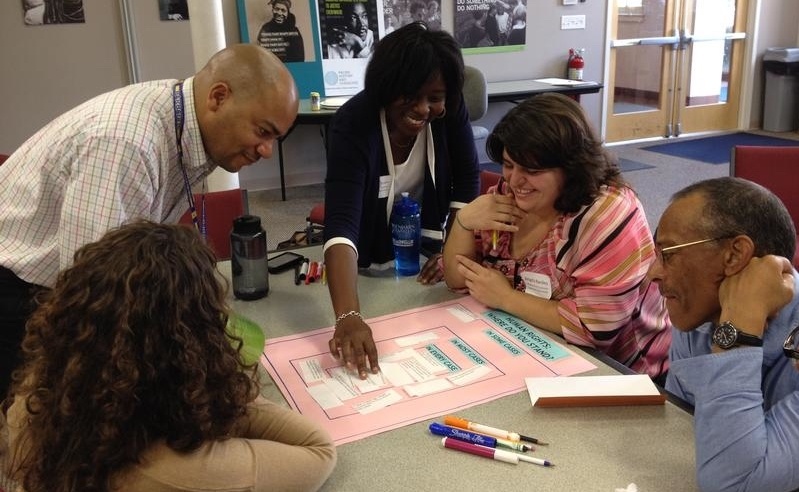 I recently visited with two people who worked at a very grand government department building in the United Kingdom. We passed the Secretary of State who politely said hello. A minor interaction, one that occurs a thousand times in workplaces everywhere. One of the officials, turning to her colleague, said, “Did you notice that he only said hello to you—the only white person?” Her colleague replied, “That’s probably because I am the only one wearing a departmental badge.” But she was also wearing the same badge. It was only me who was the visitor.

This brief, yet common and familiar, exchange highlights one of the ways racism manifests itself today. They are small, sometimes barely perceptible behaviours that I refer to as micro-incivilities. Other examples include being ignored, being talked over, or having stereotypical judgments made about your abilities. There are also the things that we fail to do, such as making eye contact. This small gesture conveys so much about human interaction: it signifies affection, trust, and respect. Denying someone eye contact makes them invisible and excludes them from the group. These instances can be so subtle that people exhibiting these actions may not even be aware a slight has occurred.

But for those of us on the other end, we’re often left to ask ourselves a number of questions that often leave us confused: First of all, did the behaviour occur at all? If it did, was it an indication of prejudice? Is it worth mentioning to others? If it is mentioned, how will others react? These are only some of the questions that will flash through our minds in a fraction of a second.

It is little wonder that being regularly subjected to these "minor" actions leads to greater stress than more overt acts of racism, where none of this speculation occurs. The reaction of the white colleague in the government building indicated she hadn’t even noticed. Once it was pointed out to her, she was happy to attribute it to something else entirely.

The last 50 to 60 years have seen a remarkable and positive shift in attitudes toward race. Generally speaking, societies like the US and the UK are much more egalitarian, open-minded, and tolerant than before. People are more comfortable having minorities as neighbours, colleagues, friends, and partners. Individuals are far less likely to agree with the stereotypes that were commonly associated with many minorities in the past. All of these changes make life for someone from a visible minority much more comfortable in society.

Furthermore, the so-called "science of race,"—the belief that some categories of people were superior to others-intellectually, physically, emotionally, and even aesthetically—have been thoroughly discredited.

All of this can lead us to believe that the science of race, and with it racial prejudice, have been well and truly buried. Unfortunately, even though racial theory may have been consigned to history, racism lives on. Like the zombie, the notion of race doesn’t know it’s dead.

And this can have very real consequences. If we, as adults, are demonstrating this behavior, often times without even realizing, then what examples are we setting for our young people? Just as we encourage our students to be inclusive, thoughtful, compassionate people who reject racism, we must encourage ourselves to be more aware and more vigilant of our own behaviors. Like school is for children, our workplaces are where we have the majority of our social interactions. And it is only a matter of time before our children enter the workforce where we created these environments.

So I invite you to take one action: Recognize that team members, co-workers, and friends may experience working in a team differently than you. It does not mean that they are wrong. Listen in an open-minded way to others about their experiences. Reflect on what you hear and learn from them. This can be an effective first step all of us can take to create more inclusive and fair workplaces. We can leave this behind for the next generation to step into and carry it onward.

Consider your own work environment and how race plays a role in your everyday interactions. Then, use your reflections and challenge your students to think about how the idea of race is constructed with our lesson, "The Concept of Race" from our unit, Teaching Holocaust and Human Behavior. In this lesson they will define and analyze the socially constructed meaning of race, examining how that concept has been used to justify exclusion, inequality, and violence throughout history.

Professor Binna Kandola OBE is the Senior Partner as Business Psychologists, Pearn Kandola. He is recognized as an expert in the field of Diversity and Inclusion and is a published author and conference speaker on the topic.
At Facing History and Ourselves, we value conversation—in classrooms, in our professional development for educators, and online. When you comment on Facing Today, you're engaging with our worldwide community of learners, so please take care that your contributions are constructive, civil, and advance the conversation.